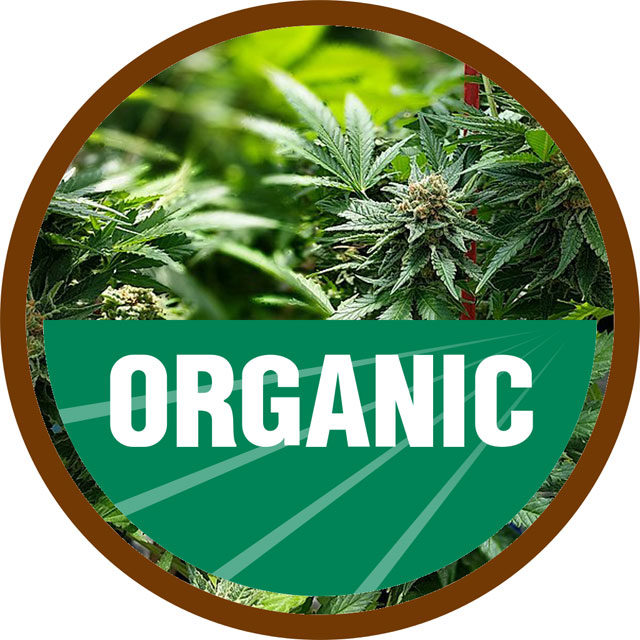 But it’s not as simple as walking into a grocery store. For health-conscious people who like to know where their food was sourced and how it was processed, purchasing cannabis can be another source of anxiety because it’s not clearly labelled. A lack of regulatory oversight has many cannabis consumers worried about the chemicals they are ingesting along with their weed.

If your cannabis is grown in unhealthy, contaminated soil, these contaminants will appear in your flower. To make matters worse, smoking pesticides can release dangerous toxins like hydrogen cyanide, carbon monoxide, carbon dioxide, hydrogen chloride and more. While many pesticides can be used safely (according to the U.S. Department of Agriculture (USDA)) on plants that will be eaten, adding the component of combustion creates complications.

But it’s not just about avoiding health hazards. Organic cannabis free of chemical fertilizers produces higher quality bud with the perfect amount of terpenes, terpenoids and cannabinoids, the aromatic combinations that give cannabis its smell and flavor. But finding healthy, sustainably grown cannabis is difficult because the term “organic,” used on food and crop labeling, is regulated by the USDA. Since cannabis is federally illegal, the USDA will not give it an organic certification. So that means the standards for what qualifies as organic in cannabis cultivation have not been clearly defined.

To help clear the confusion, organizations like Clean Green have created private organic certifications for cannabis. It requires on-site inspections and third-party lab testing. Much like the USDA National Organic Program for traditional agricultural products, the whole life cycle of the plant is considered, from seed selection to harvesting and processing, as well as soil, nutrients, pesticide use, mold treatment and dust control. Clean Green companies also must put into place a carbon footprint reduction plan, water conservation measures and fair labor practices. Unfortunately, these certifications can be prohibitively expensive for smaller operations. The result is that very few cannabis farms have been officially certified as organic.

In an effort to protect consumers, the industry’s watchdog, the state Marijuana Enforcement Division (MED), now requires every harvested batch of medical and recreational cannabis to be tested for heavy metals, including but not limited to arsenic, cadmium, lead and mercury. While the MED says heavy-metal testing requirements have been in place for a couple of years, testing was never mandated. That could change on July 1, 2019, the date when the current draft of the new rules says additional testing would be required.

But this isn’t all about you, consumer. Organic cannabis isn’t just better for your health, it’s better for the Earth. Conventional growing is an unsustainable practice that causes lasting harm to the local environment. Cannabis nutrients can carry heavy metals that seep into the soil and subsequently accumulate in the plant. Synthetic fertilizers and conventional growing techniques damage soil integrity, and destroy microbial, insect and animal habitats. Organic farmers mitigate this damage by maintaining healthy soil through a variety of low-impact techniques, like integrated pest management and probiotic farming.

Because of a lack of both regulation and research, many growers simply don’t know about the residual metals left from nutrients they’re using.

When it comes to putting something inside of your body, it’s important that the substances you’re choosing are actually good for your health, especially for medical patients. Should cannabis consumers hold the industry to higher standards when it comes to testing cannabis and providing information on where it was sourced and how it was grown? Yes, your weed should be held to just as high of a standard as your kale.