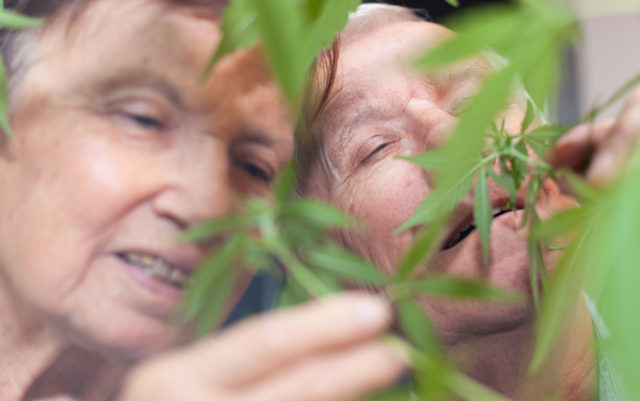 The number of seniors who are using marijuana just keeps going up — in fact, the number nearly doubled between 2015 and 2018, according to recently released research out of New York University.

Led by Joseph Palamar, the NYU team surveyed more than 15,000 older folks — 65 years old and up — and found that 4.2% reported using marijuana in some form (as compared to 2.4% in 2015), with certain groups appearing to be more likely to use.

For example, men were nearly twice as likely to use marijuana compared to women (though there was a whopping 93% increase in the number of female seniors who reported using marijuana). College-educated seniors were more likely to use it than those with only a high school degree or less, as were those with higher incomes and those who were married.

Palamar has been researching marijuana use among American seniors for the last decade using data from the National Survey on Drug Use and Health. The number of seniors who admit to using marijuana has risen sharply since 2006, with less than 1% (0.4%) of seniors reporting using marijuana products that year.

“Marijuana use among seniors is not bouncing up and down like with other drugs,” Palamar told CNN in late February. “It’s a straight line up.”

The survey asks questions about “marijuana, hashish, pot, grass and hash oil use either smoked or ingested,” but doesn’t ask directly about more contemporary methods of delivery such as THC or CBD topicals or pills.

While the survey didn’t directly ask seniors if they were using marijuana specifically for medical benefits, Palamar told HealthDay News he thinks this is the case.

“From what I see, I think a lot of older people are using weed more for medical reasons rather than recreational reasons,” Palamar said. “I know someone in this age group who [thought] never in a million years [would they]use marijuana. She eats a marijuana gummy every night to help her sleep, because she feels it helps better than anything else. I think this is becoming more common.”

But Palamar stresses that seniors — even though they may have used pot heavily in their youth — need to be careful.

“If you’re in your late 60s or 70s and you haven’t smoked weed in decades and you reinitiate weed one day, you might not know what to expect,” Palamar told HealthDay News. “Your body is much different in your 60s than it was when you were a teenager. You might not be able to handle it, especially considering that weed appears to be getting more potent.”

Tracy Mahaven, an associate professor of pharmacy practice of the University of Wyoming, told CNN that seniors need to consider the prescription medication they are taking when they decide to use marijuana. She specifically pointed to the the blood thinner warfarin.

Then there are concerns about dizziness, falls and short-term memory loss (which can lead to forgetting to take important medications).

“Cannabis use was very stigmatized in the past but now we have all these new laws passing about medical use of cannabis, so people are curious to see if it is something that can be used to treat their chronic disease,” NYU study co-author Benjamin Han told STAT.

Han stressed how important it is for health care providers to be aware of growing marijuana use among seniors, and be prepared to talk about the potential benefits and side effects.

“As health care providers, we don’t do a very good job of screening older patients for substance use,” Han said. “This is something we need to be asking, and be prepared to answer any questions about.”

The study was published Feb. 24 in JAMA Internal Medicine.