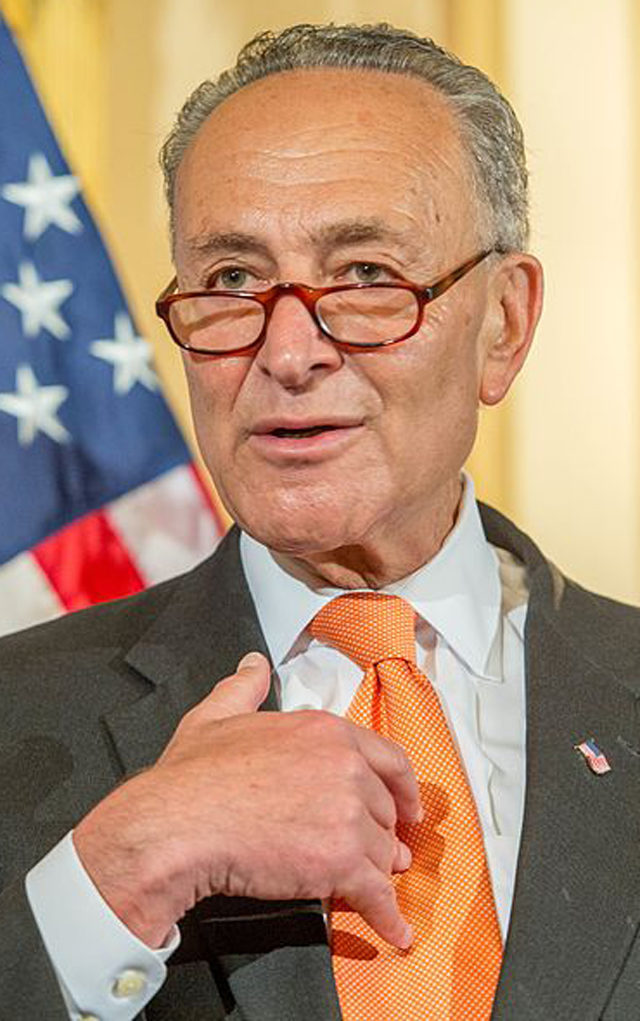 Two-thirds of Americans, most of whom are not stoners, believe marijuana should be decriminalized. So does Senate Minority Leader Chuck Schumer, who is so thirsty to become the majority leader that he’s determined to give the people what they want ahead of the midterm elections so that we can all get high. Dope.

Last week, Senator Schumer, a totally chill dude from New York who is related to comedian Amy Schumer, introduced the Marijuana Freedom and Opportunity Act, a bill to decriminalize cannabis at the federal level and effectively allow states to continue to decide how to regulate it. This is a significant milestone for the legalization movement, as Schumer is the highest-ranking elected official to ever put forward pro-marijuana legislation.

“The time to decriminalize marijuana is now,” Schumer said. “The new Marijuana Freedom and Opportunity Act is about giving states the freedom to be the laboratories that they should be and giving Americans — especially women and minority business owners, as well as those convicted of simple possession of marijuana intended for personal use — the opportunity to succeed in today’s economy. This legislation is simply the right thing to do and I am hopeful that the balanced approach it takes can earn bipartisan support in Congress and across the country.”

The new legislation will focus on improving communities that have been disproportionately affected by our current marijuana laws. Grant programs would be created to provide financial incentives to local and state governments that assist anyone convicted of minor cannabis offenses in expunging or sealing their records. Additional funding would be made available to provide financial assistance to women- and minority-owned cannabis startups to ensure they have access to the new marijuana industries in their states.

The bill allows any state that has legalized (or plans on legalizing) cannabis to do so without any risk of federal prosecution. However, it would still be a federal crime to smuggle marijuana from legal states to states where the drug is still prohibited. It also allows the Department of Treasury to set nationwide regulations on marijuana advertising, in order to ensure that cannabis products are not being advertised to children. An additional $500 million would be set aside for medical research on cannabis, targeted at identifying risks of long-term use as well as further benefits of medical marijuana.

The bill is co-sponsored by Senators Tim Kaine (D-Virginia), Tammy Duckworth (D-Illinois) and Bernie Sanders (I-Vermont), which should come as no surprise considering Sanders was very open about his support of legalizing marijuana during the 2016 presidential campaign. He also “did” weed twice, and it made him cough a lot, so now we know what “feel the Bern” really means.

A number of Senate Democrats have been working the issue for a while now. (I like to imagine that they all hang out in Sanders’ office after hours, putting their chairs in a circle, sparking up a fatty and going over their talking points like an episode of That 70’s Show). Schumer’s bill comes on the heels of a similar bill introduced by senators Gardner (R-Colorado) and Warren (D-Massachusets) last month.

Criminal justice reforms are the focus of Senator Cory Booker’s (D-New Jersey) Marijuana Justice Act, introduced last August. His bill would legalize marijuana at the federal level, expunge all federal marijuana-related offenses from criminal records, grant convicts currently imprisoned for those offenses the right to petition for re-sentencing, and cut federal prison and law enforcement funding from states that haven’t legalized marijuana and disproportionately arrest or incarcerate the poor and minorities over pot. Booker’s bill also sets aside $500 million a year in grants for job training, ex-convict re-entry programs, libraries, youth centers and other services and programs within communities heavily impacted by the war on drugs.

Legalizing marijuana nationwide would create at least $132 billion in tax revenue and more than a million new jobs across the United States in the next decade, according to the most recent data. President Trump said he “probably will end up supporting” a congressional effort to end the federal ban on marijuana, a major step that would reshape the pot industry and end the threat of a Justice Department crackdown.

Of course there always has to be that one annoying narc, and in this case, it’s Attorney General Jeff Sessions, whose remarks put him at odds with Trump on the issue. Sessions has said that “Good people don’t smoke marijuana.” Ahem, I am a f***ing good person, Jeff. Sessions seems determined to infringe on the states’ rights to control their own marijuana laws, which is not very Republican of him. It’s chill though, cause the 64 percent of Americans who support legalization will go out and vote for Dems who will pass legislation they favor.