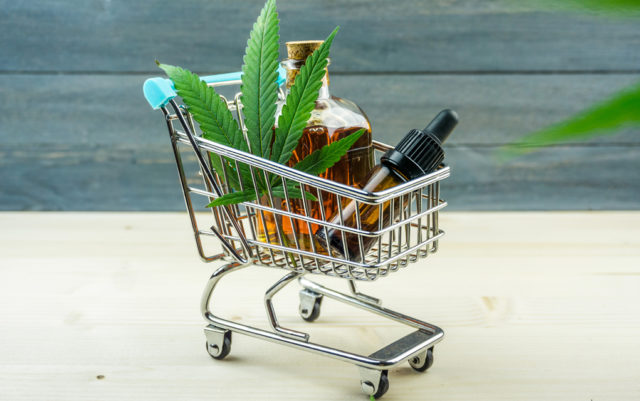 The CBD frontier just keeps getting bigger.You’ll find the natural plant-based product in dispensaries, health food stores, crystal and gem shops, even local cafés. People rave about CBD’s potential to treat anxiety, chronic pain, sleeplessness and about its value as a medicinal alternative to pharmaceuticals.

It’s why the CBD industry is on track to become a $22 billion enterprise by 2022. Not only does it offer a lot of the same benefits that come from cannabis, but it does so without any of the psychoactive aspects — you get the medicine without the high.

That’s appealing to a lot of people. And, since CBD isn’t technically “marijuana,” it’s sold in almost every state, without the need for a license. That has allowed far more CBD-centered businesses to open their doors and start selling products to those who need them: from CBD isolates to salves, tinctures, honey, seltzers, chocolate and capsules all over the nation.

However, CBD is still considered a Schedule I substance by the feds, and therefore the market remains unregulated by any federal institution. The FDA isn’t keeping tabs on CBD products and on top of that, businesses who buy CBD concentrates to use in their products often can’t afford to have that CBD professionally tested by a third-party lab.

That means, by and large, no one’s verifying the claims these companies advertise, and no one’s testing the quality or content of the CBD going into their products. And that uncertainty then gets passed onto users. Certain states, like Colorado, do have state-mandated testing for all hemp products sold in dispensaries. But outside of dispensaries, and outside of Colorado, when you buy CBD there’s no knowing how much real CBD is actually in the product — or, for that matter, what else might be in there.

“We see a lot of people who are making claims that can’t be verified,” says Chris Hudalla, the founder and CSO of ProVerde Labs, an accredited chemical and microbiological testing laboratory that provides both testing and consulting services for its clients. “In most cases there’s no state regulation for CBD or hemp products, and with no oversight, with no regulatory safety agency looking over this, it’s a free-for-all.”

ProVerde Labs deals with many responsible companies that want (and can afford) to get their products lab-tested for purity. ProVerde tests for contaminates like heavy metals, fertilizers, salmonella and mold to name a few; and it provides certificates of accreditation to show that the CBD was tested by a professional third-party lab.

But, ProVerde also sees the darker side of the CBD industry, everything from simple product contaminations, to test certificate forgery, fraudulent quality claims and even large-scale dissemination of carcinogenic CBD products knowingly contaminated.

“You have a lot of very responsible producers who are really focused on high-quality products,” Hudalla says. “And then you have a lot of people who are just in it to get in it, they’re in it to make money and some of them don’t care about consumer quality or consumer safety; or some of them simply don’t know enough.”

Some companies play games with semantics, Hudalla explains. For instance, he’s seen some products that boast of containing 100% “hemp oil.” A claim Hudalla says is ambiguous.

“It could be hemp seed oil, which contains no CBD, or it could be the resin extracted from the plant, which would be predominantly CBD, you know 60-70-80%, or it could be a mixture,” he says. It could mean just about anything. “I think that people are using that term to mislead customers.”

Hudalla says ProVerde’s tested samples from clients who spent thousands of dollars online on bulk CBD isolate, only to discover that it was 99% vegetable oil.

“And without regulation, what’s your recourse?” Hudalla asks, rhetorically — there isn’t one. You can complain, he says, but that’s about it.

Hudalla has also caught businesses trying to fraudulently alter ProVerde’s test certificates. He describes one customer who called asking ProVerde to verify a test-certificate, and when he checked he found a disconcerting discrepancy.

“Our original tests had shown a significant amount of pesticides in the product and when I looked at their test certificate that they posted on their website, that certificate had the pesticide [results] whited out,” Hudalla says.

When he called the parent company to confront them about it, the person on the other end hung up immediately. He recalls, “The next day, the phone number was disconnected and the website was gone.”

Hudalla says he could go on and on, telling these kinds of stories. Still, he remains an advocate for CBD — he recognizes its medicinal potential, and respects just how much relief it brings people. Federal regulation and required testing could ensure consistency, honesty and safety in these medicinal products, he maintains.

Until that is the standard, though, people need to do their due diligence to stay safe.