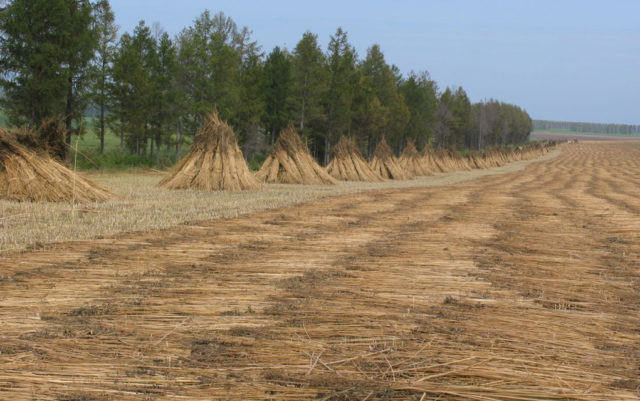 We moved from Phoenix to Washington when I was 15 years old where I watched the trees of Washington get lawn-mowed by the logging industry,” says Rob Jungmann, owner of boutique hemp clothing company Jungmaven. “Coming from the desert, I didn’t have a practical understanding of what trees were. Instead, I learned to see life in the littlest things, like puddles and cacti. Moving to Washington was incredible — I remember sitting by a river and all I could see were trees and all I could hear were birds. A year later, all I could hear was the noise of logging trucks.”

Since then, Jungmann has taken inspiration from his environment to promote alternatives to destructive industries like logging, specifically hemp textiles, which offer another option that is actually good for the earth, if not regenerative.

Jungmann’s company is a small cog in the wheel of the behemoth industry of textiles. Dominated by cotton and plastics, the global apparel and textile industry is valued at more than $3,000 trillion and is growing at 5 percent year over year, according to MarketLine.

But size isn’t always a good measure of strength. The company is a part of a burgeoning domestic market for hemp textiles. Where a decade ago Jungmann found himself an outcast at textile trade shows, he is now considered a pioneer -— one of the first to confront stigmas about industrial hemp and insist on its potential.

For the growing number of enthusiasts, hemp is hailed as a panacea, a plant that can save the environment from its entire array of problems.

Its fibers can replace the majority of the world’s paper and textile industries, not only stopping the need for deforestation, but with the built-in ability to reverse the greenhouse effect. It can replace fossil fuels and its derivatives to meet the world’s transportation, industrial and home energy needs while simultaneously reducing pollution, enhancing soil and cleaning the air.

And, as an agricultural product, it promises to bring back resilient farming practices that require no pesticides or fertilizers, use less water and that can create meaningful jobs from soil through supply chain.

Sharing the same scientific genus as marijuana, hemp has been illegal in much of the world during the past 70 years of cannabis prohibition and is still illegal to grow in most countries. As a result of these legislative barriers, it has also faced economic barriers, on both the supply and demand sides of the equation.

Today, 30 countries around the world are breaking with the convention of international treaties to allow farmers to grow industrial hemp. China is the largest producer and exporter, accounting for a quarter of global production.

Despite its decidedly prohibitionist position on marijuana, China recognizes the economic power of the crop and has taken steps to allow for industrial production without affecting marijuana’s illegal status. With few domestic options, Jungmann imports all of his fabric from China.

He describes the situation like an iceberg: “Imagine there was a penguin smoking a joint on the tip of an iceberg,” Jungmann says. “And that underneath there is this massive hunk of ice that has the potential to save us from ourselves, economically and environmentally.”

China is progressively exploring the potential in the iceberg while the United States is still adamantly fighting the penguin on top.

But as cannabis prohibition is challenged globally and domestically, a lot is changing for industrial hemp, making it a legally viable alternative for many more destructive industries.

The progress began with the Agricultural Act of 2014 (commonly known as the 2014 U.S. Farm Bill) that created a legal distinction defining industrial hemp as Cannabis sativa — with a THC concentration of less than or equal to .03 percent — and any plant with a higher amount of THC as marijuana.

With the legal distinction established, it became possible to legalize industrial hemp without entangling with the drug policy of marijuana.

Soon after the Industrial Hemp Farming Act of 2015 was introduced to the U.S. Senate to do just that, but has since struggled to gain support and momentum despite receiving broad and bipartisan support.

John Finamore, executive director of the Boulder-based National Hemp Association, has been instrumental in advancing the bill and heralding in a new era of hemp in the U.S. Under President Bush, hemp growers were prosecuted under federal law. Eight years later, growing hemp is legally viable in 28 states.

“What I hope is that [we] will continue to recognize how far we have come in a relatively short amount of time,” Finamore writes in an email to Boulder Weekly. “The work to fully legitimize hemp is not over, and we may in fact face new hurdles, but patience and diligence now will certainly reward or efforts going forward.”

Finamore was hopeful that 2017 would be a continuation of this effort, but, given the turnover in administration, he is now looking at what he calls a “total restart.”

Next week’s column will look at the economic potentials and barriers affecting the legislative progress of hemp legislation in the U.S.