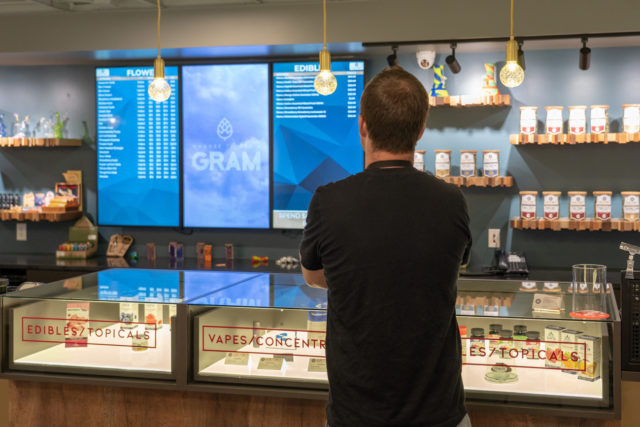 The physical menu is a dying tradition. Even prior to COVID-19, many businesses were starting to switch over to a digital means of communicating a customer’s options — slowly, menus were being replaced with screens and QR codes.

Now, with the pandemic, that transition has been put into hyperdrive. With a novel virus on the loose, the concept of a physical menu being passed between strangers and around businesses has become something of a hazard.

“We want to use screens to transform the retail experience,” Shawn Cutter, CEO of GreenScreens, says. “We want to provide information to the people that need it, when they need it.”

Currently in 18 states and Puerto Rico, GreenScreens gives hundreds of cannabis retail dispensaries the option to go “hands-off” with both their menus and their in-store advertising. It offers custom display placement recommendations for every room in a client’s dispensary; it manages all of the back-end parameters for the displays; it even integrates with the dispensary’s digital inventory to display real-time menu availability.

GreenScreens saves on overhead and streamlines in-store advertising. It eliminates the risk of passing around a physical menu or ad, and it makes retail updates extremely easy. All of which is why it’s seen demand for its services spike since COVID-19 hit the scene.

But, as Cutter and his team discovered, GreenScreens is also a functional advocacy platform that can be used to empower customers and promote causes. As Cutter put it, the power it has is the power to communicate — and he wants GreenScreens to use that power to have a bigger impact on the world.

“It’s part of the whole community aspect of the cannabis industry,” he says. “In order for this industry to be successful, we have to put back into it.”

This August, GreenScreens started offering support for Last Prisoner Project, a nonprofit dedicated to establishing restorative justice to those who have suffered under cannabis prohibition. Its team of cannabis industry leaders, criminal and social justice advocates and policy and education experts are committed to “freeing every last prisoner of the unjust war on drugs.”

“We’re proud to participate in this important effort to bring justice to and help rebuild the lives of those individuals who have struggled under cannabis criminalization,” Cutter said in a press release about the partnership.

“We’ll be working to get the word out about this important opportunity and convince as many of our 200 retailers as possible to participate in this effort,” he said. “It’s our belief that working together, cannabis industry leaders can alleviate the inequities created by cannabis legalization.”

GreenScreens’ partnership with Last Prisoner Project isn’t its first foray into the public service space, according to Cutter. It has partnered with the State of Colorado before, promoting PSAs like CDOT’s “Don’t Drive High.”

“We’re trying to raise awareness, and explore other areas that we should be playing a role in, rather than just promotions,” Cutter says. “There’s a lot of our screens around Colorado, and they could really have a big impact.”