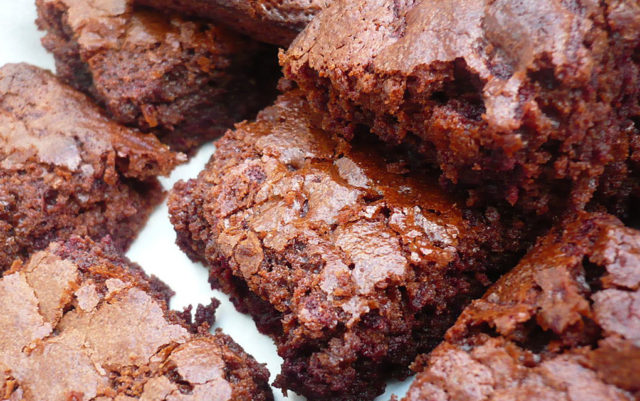 Does anyone remember the news story that went viral back in 2007 about a police officer in Detroit who stole weed from suspects, baked it into brownies with his wife, then called 911 to report himself because he thought they were dying from an overdose? The dispatcher asked how much he had, and to this day, his response is the still the most hilarious and accurate portrayal of the paranoid anxiety people experience when they over-consume cannabis: “I don’t know. We made brownies. And I think we’re dead. Time is going by really, really, really slow.”

Getting stoned is fun, but feeling like you’re way too high is definitely an uncomfortable situation in which to find yourself. Trust me, most of us have been there. It’s easy to do with edibles because of the delayed effects, especially homemade brownies that aren’t dosed as accurately as what you’d buy at a dispensary. It’s probably looked something like this: You eat an edible, barely wait 30 minutes, think to yourself, “this isn’t working. I should probably eat some more,” then an hour later, you’re floating above the couch making animal sounds. Or worst-case scenario, you’re having a panic attack.

It’s fine, you’re not going to die. Lucky for that police officer and everyone else that’s ever been there, the number of reported deaths due to cannabis overdose in all of recorded history is zero. Cannabis on its own cannot kill you. Unlike opioid and alcohol overdoses that can shut down the body’s breathing and blood circulatory systems, cannabis does not have the ability to affect those systems in the same way.

However, overconsumption is a very real thing. There are some things to help ease the effects, but time is the only way to truly “unhigh” yourself, so you mostly have to just wait it out. Even if you have the most baller health insurance and can afford to call the paramedics or check yourself into the emergency room, there’s not much they can do for you. There are no accepted treatments that stop cannabis overconsumption, so they will likely just make you sit there and wait it out. You can avoid the $700 hospital bill with some way more practical home remedies. Whether you’re smoking a high-THC strain for the first time or not paying attention to the potency of your edibles, here’s some advice if you find yourself in that situation:

Unless you have a piece of brownie lodged in your throat, oxygen is coming through, so don’t panic because you definitely have the capacity to breathe. If you’re feeling anxious, close your eyes and take big-belly breaths. Try meditative breathing: inhale through your nose for a slow count of four seconds, hold your breath for three seconds, and then exhale for four seconds. Repeat this cycle for a few minutes.

CBD has been proven to naturally reduce anxiety and relax our minds. It’s also nature’s antidote to the high THC can produce. CBD works by blocking THC from binding with the cannabinoid receptors in your brain, toning down the effects from THC. CBD comes in many forms, like tinctures, gel tabs, vape cartidges, gummies, topicals and patches, which is great since you’re already too stoned and smoking something, even if it is a CBD-heavy strain, might be too much to handle.

Unfortunately, you can’t stop your body from digesting edibles that you’ve already eaten, but you can dilute the contents of your stomach by eating and drinking more so that digestion takes longer and releases cannabinoids in smaller amounts. Food can also be comforting and eating gives you something on which to focus.

Cannabis shares terpene profiles with many other plants and fruits that are commonly enjoyed. By applying counteracting terpenes, you can counteract the process. One of the few things known to diminish extreme highness is limonene, which is a terpene that weakens THC’s effects on the brain. Black pepper possesses another terpene that’s proven to combat weed-based paranoia. Things like lavender, lemon juice and black pepper assist in minimizing the effects of cannabis terpenes on the body.

Whether you’re alone at home or in public with friends, it doesn’t matter because most of what you’re feeling is psychological. Nothing bad is actually going to happen to you. Walk around, get some fresh air, listen to music, hop in the shower, take a nap and remember that you’re not going to be high forever.