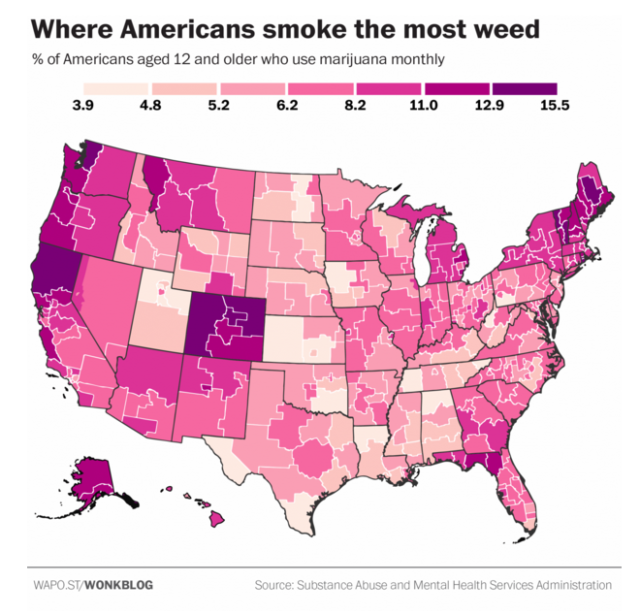 Ever wonder what parts of the country are home to the highest percentage of stoners, and which parts have the lowest percentage? And ever wonder just how much the typical pot smoker spends on weed?

Two new studies are out that address those burning questions.
The first one was done by the U.S. Government’s Substance Abuse and Mental Health Services Administration (SAMHSA). And it comes with a cool map that shows where the stoners are and aren’t. (See map.)

According to a story in the Washington Post, it turns out the place with the highest proportion of marijuana users in the county is — wait for it — San Francisco, California, with 15.46 percent of the population over the age of 12 reporting that they have smoked pot in the past month.

And we here in Colorado are close behind. The number of Coloradans over 12 who said they had smoked marijuana in the past month came to 14.01 percent of the population.
A glance at the map shows that Coloradans really are the riders of the purple haze.

The percentage for Boulder County isn’t broken out separately, but is included in the Greater Denver Co-Prosperity Sphere (essentially the counties that belong to the Denver Regional Council of Governments, if I read the map correctly). The percentage of the population who reported smoking pot in that area came to 14.80 percent. (It wouldn’t be surprising if Boulder County’s percentage was higher than the region’s, and the City of Boulder’s higher still, but SAMHSA’s data isn’t sliced and diced that fine.)

Interestingly, our region didn’t contain the highest percentage of Colorado stoners. That honor goes to the Western Slope with 14.84 percent.

It turns out that every few years the SAMHSA combines data from its National Surveys on Drug Use and Health to derive the estimates of monthly marijuana use. The latest data covers the years 2012, 2013 and 2014, and includes survey responses from approximately 204,000 people. The large sample size makes it possible to produce a map with a level of detail not possible with traditional surveys.

Significantly, most of the data was gathered before legal marijuana sales began in Colorado at the start of 2014, so we’ll have to wait until the next report to find out how much impact legalization had on marijuana use.

So where else in the country do we find concentrations of marijuana users approaching San Francisco/Colorado proportions? Northern California’s Golden Triangle, Seattle and Washington, D.C. all stand out.

The lowest use rates are in the far south of Texas, where fewer than 4 percent of the population smokes pot monthly.
Nationally, 7.7 percent of Americans age 12 and older, approximately 20.3 million people, use marijuana monthly or more.

The study of how much a typical pot user spends on weed in a year was done by Headset, Inc., a cannabis consultancy, which reviewed about 40,000 legal pot purchases in Washington state from September 2014 to July 2016.

According to a story by Bloomberg News, the study found that the average recreational marijuana consumer is a 37-year-old man who buys traditional marijuana buds. The medium amount spent by this consumer is $647 annually, with an average of 19.5 days between purchases.

The median amount spent per buy by customers in their 20s is $27 per visit to a dispensary. However, it was geezer stoners who spend the most per trip; buyers in their 80s spend $64 per visit.
The biggest median annual spenders are found in Generation X; users in their 40s spend $823 a year on pot.

“As you’re older, you might have more money to go and make bigger purchases,” said Headset co-founder Cy Scott to Bloomberg News. “The millennials might be out and about more; they can drop into [marijuana dispensaries] more often. Older people might just plan more.”