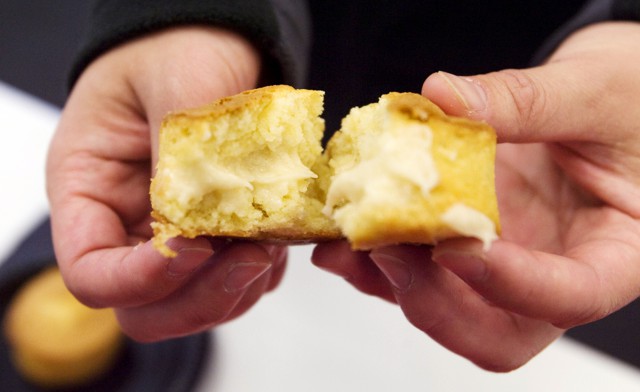 Twinkies do, in fact, have a shelf life — 25 days, to be precise, according to .
It only seems like the yellow sponge cake injected with vanilla cream
filling lasts forever. Maybe because it’s been around as long as anyone
can remember.

The snack was invented on , by a bakery manager named in , just outside . His employer, the ,
was looking for a cheap snack to serve to Depression-hit consumers, and
Dewar noticed that stacks of shortcake pans never got used outside the
six-week summer strawberry season. So he experimented, and came up with
a uniquely American creation. They were sold two for a nickel.

About 500 million Twinkies are now sold each year,
and they’re as beloved by children and snackaholics as they are loathed
by nutritionists. A package of them was placed in the Millennium Time
Capsule by in 1999 (well, of course
he would), and they’ve been (erroneously) blamed for causing murderous
tendencies, thanks to the “Twinkie” criminal defense.

Are they good for you? Well, they’re not terrible:
One single cake has about 150 calories, 4.5 grams of fat and 19 grams
of sugar. You could do worse.

But Hostess lays on the “it’s not that bad for you”
frosting a little thick. The company quotes “Mr. Twinkie” himself,
Dewar, who purportedly ate three Twinkies a day for 50 years until his
death in 1985 at age 88. “I fed them to my four kids and they feed them
to my four grandchildren. Twinkies never hurt them.”

Must have been fun growing up Dewar. “Apple? Whatya
want one of those for? Twinkies built this house, and by God you’re
eating them.”

Here are a few more tidbits about Twinkies:

—Dewar named the snack after a billboard he saw advertising , but never got paid royalties for his creation.

—The Twinkie originally had banana filling, but
bananas were rationed during WWII, so vanilla was substituted.
Customers liked it so much it stayed in there.

—The deep-fried Twinkie was invented at the Texas State Fair. Here’s a recipe.

—In a nod to the supposed indestructibility of the snacks, the
lists several silly experiments that can be performed on them, such as
the “gravitational response test” (i.e. dropping one from a 6th-floor
window).

More about the “Twinkie defense.” It was coined by a journalist during the trial of , who shot and killed Mayor and Supervisor in 1978. A psychiatrist for the defense testified that White’s sudden
all-junk-food diet was symptomatic of the depression that led him to
snap and kill the men, not a cause of it. The word “Twinkie” was never
actually used in court.

In other words, eating a Twinkie alone won’t make you want to kill. So it’s safe to have one, now and then.

Visit the Register on the World Wide Web at http://www.ocregister.com/