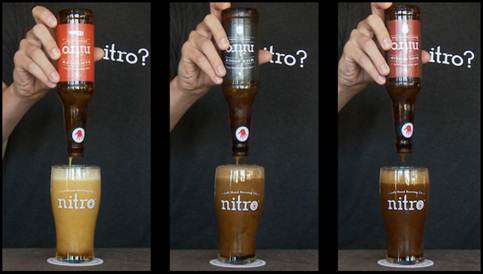 We don’t typically throw up press releases as stories, so don’t get any ideas, PR friends.

But below we’ve reproduced the Left Hand announcement of two new bottled nitro ales, already favorites in their own right: Sawtooth and Wake Up Dead.

So Left Hand’s nitro-izing two of its other favorites, the Sawtooth American Extra Special Bitter and Wake Up Dead Russian Imperial Stout. The two beers will be available in Colorado liquor stores for the rest of the year. The nitro treatment smooths out any hoppiness from the Sawtooth, while the Wake Up Dead on nitro is creamy, with a softer finish than the regular.

The Left Hand press release is below.

Following the tremendous success of Milk Stout Nitro, Left Hand has developed two more bottled Nitrogen beers from their popular draft Nitro series. “The inspiration for Milk Stout Nitro came from the desire to have a draught experience at home,” said Chris Lennert, VP of Operations. “The MSN six pack has been a solid success – we had every reason to create a similar offering for Sawtooth Nitro and Wake Up Dead Nitro.” Similar to the classic CO2 originals, Sawtooth Nitro portrays nutty malt flavors balanced by herbal hops while Wake Up Dead Nitro reveals a trifecta of cocoa, dried fruit, & licorice flavors. Pouring hard out of a bottle, all 3 Nitro beers begin with a beautiful cascade and finish with a thick creamy head, crafting a super smooth experience.

Thursday night, the brewery had more to celebrate beyond the Nitro newcomers. With a room full of friends and industry partners, Left Hand’s bash commemorated the brewery’s 20 years of business since their opening in 1993. Attendees got their first taste of Left Hand’s Throwback series featuring Jackman’s Pale Ale, Deep Cover Brown Ale, Munich Dark Lager, Dunkelweiss, and Motherlode Golden Ale. Moreover, the draft lineup also featured all 5 volumes of Fade to Black, the brewery’s acclaimed winter series. Left Hand will distribute all 10 styles to its current markets on draft for a limited time.

Sawtooth Nitro and Wake Up Dead Nitro will be available to the Colorado market only for the remainder of the year. Distribution to additional Left Hand markets will begin in 2014.