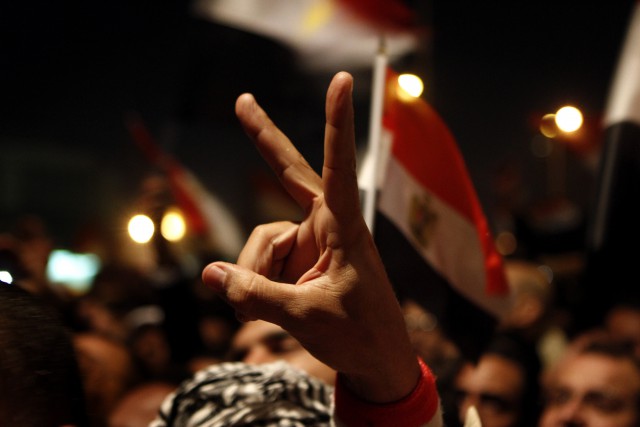 — Egyptian President resigned Friday and the military took control of the country after
weeks of widespread protests and economic turmoil that have shaken this
besieged nation and raised calls for democracy across an increasingly
restive .

“President has decided to step down and has handed power to the Supreme Council of the Egyptian Armed Forces,” Vice President announced on state radio and television.

Those comments marked a stunning end to a dominating
rule that spanned 30 years and saw Mubarak rise as a strategic U.S.
ally in a troubled region.

Mubarak spent his presidency crushing opposition
voices. But it was years of pent-up anger exploding in a protest
movement that overwhelmed his police state for 18 days and forced the
military to nudge him aside.

Hundreds of thousands of demonstrators broke into chants and song as
swelled with jubilation and wonder. Many of those in the square were
born under Mubarak’s reign and what unfolded was a moment of
transforming history in which a popular revolt toppled an enduring icon
of Arab power.

The announcement was made hours after Mubarak and his family flew from to their home in the resort of .

Demonstrators had coalesced Friday around the state television and radio building in downtown , while a few hundred protesters standing outside of the presidential palace in the suburb of Heliopolis had entered into a tense standoff with Mubarak supporters.

The protesters had erupted in anger after the
president clung to power in a state address late Thursday night. It was
not clear how a solution would be found to end the confrontation
between the demonstrators and the ruling elite from Mubarak’s National
Democratic Party. The military, which has served as the pillar of the
modern Egyptian state, now finds itself caught in the middle of the
surging antigovernment movement and Mubarak and his loyalists. Until
now, Mubarak and his inner circle, who hail from the military’s ranks,
have commanded their loyalty.

Mubarak had delegated most of his authorities on Thursday to his new vice president, ,
his loyal aide and former intelligence chief, and promised free and
fair elections in September, constitutional reforms and an eventual end
to emergency law. But for the swelling crowds in central , it was too little, too late after rumors had coursed through the city that the Egyptian president was leaving office.