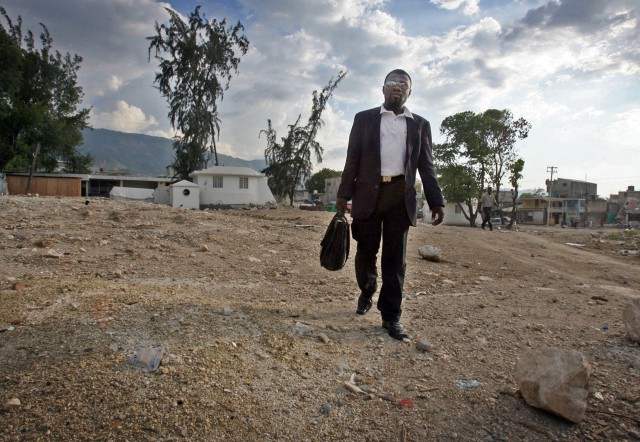 — After he lost everything in the
earthquake, a lawyers’ group gave attorney Clauvy Robas a tent to sleep
in. But, rather than pitch it in one of the camps that have sprouted up
around , he prefers to sleep in a friend’s car.

“I am not supposed to be sleeping in the streets,” said Robas, 29, a member of
middle class — klas mwayen — that has been overlooked in the urgency to
save lives and provide relief to an estimated 1.5 million displaced by
the violent quake.

As walls crumbled and the slums spilled into the streets, the
earthquake became the great equalizer in a society of staggering
disparities, forcing the middle class and the most impoverished into
the same bucket of despair.

“The worst place to be right now in this country is the middle class,” said ,
a local economist. “They’ve invested everything they had in their house
and they’ve lost it all. You have a lower class that didn’t have a
house, and today they have a tent and say ‘better for me.’ The top
already had money to get back on their feet.”

In many cases, post-quake charitable dollars and goods flowing into the country have allowed lower class to climb a few rungs up the ladder, bringing a quality of life not known before .

But for the middle class, the disparity is
unbearable. The quake that took a government-estimated 300,000 lives
not only took their homes and livelihood, it also wiped away social
status in a country where that is priceless.

On a hillside one recent Sunday morning, where once
comfortable houses made up the middle class Petionville neighborhood of
Morne Lazard, homeowners looked at the rubble and told a tale of anger
and helplessness.

Almost six months after the quake,
middle class — lawyers, doctors, receptionists and thousands of public
administration employees — have become the new poor in a land of
immense poverty. Now, they’re homeless and unemployed.

Mostly absent in the homeless camps, they choose
instead to sleep in tents in the front yards of their damaged homes, or
in neighborhood streets cordoned off with boulders and vehicles.

They’re still struggling to come to terms with their tumble from grace.

“They’ve forgotten us,” said ,
52, a father of two living with friends after losing his home of 22
years. “We pay the government taxes but the taxes don’t pay for
anything.”

Before the quake, was a receptionist, supporting herself and paying tuition for two younger brothers.

When the quake hit, the family’s three-story home on
a mountainside collapsed, killing her father who ran a neighborhood
grocery store, a brother and a 5-year-old nephew.

“There are no words to describe it,” said Thelisma, 27, who lost a total of 11 family members. “You are back at zero.”

Thelisma has had to rely on the charity of friends
for clothes and a place to sleep. Her mother, sister and two younger
brothers are scattered.

Even before the magnitude 7.0-quake shook ,
the country’s middle class was a struggling, thinning group. Roughly 15
percent of the population, they tended to survive on the shoulders of
the masses and the country’s tiny elite.

Mostly black, the middle class is defined more by its common values and quality of life, than income or political ideology.

“The moment you arrive at a place in this society
where you have something someone can take from you — a radio, a
refrigerator — you’re klas mwayen,” , a former prime minister and economist said in a interview shortly before he died last month.

A member of what’s known here as the intellectual middle-class, Bazin was deeply concerned about the neglect of
forgotten class even while in failing health. “The larger we expand the
klas mwayen, the more sound the economy will be,” he said. “It’s a
class that’s full of ambitions.”

But it’s also a class that has been unable to find its place in a society where 80 percent live on less than
a day and the 5 percent making up the economic elite — they’re often
light-skinned, and French- and English-speaking, with deep family
connections — have controlled most of the wealth.

Empowered during the 1940s and emboldened during the
early years of the Duvalier dictatorship, many in the middle class
later fled, forced by turmoil and lured by opportunity, to , , and in the decades that followed.

In the days and weeks after the quake, their exodus continued as many grabbed their passports and children and hopped flights.

In a country increasingly dependent on foreign aid, Thelisma and others say middle class is not looking for a hand out, but a way to help it rebuild.

They watch helplessly as the government attempts to
convince homeless quake victims to return to homes that either did not
exist — or were mere shacks, even before the quake as their own lots
remain clogged with debris. They can neither afford the cost of
rebuilding nor the rubble removal.

“Everyone wants to concentrate their actions on the camps, and the very poor,” said Prime Minister , who has tried to bring more attention to the plight of the middle class.

“That is not going to change anything in . After (billion) or , we will be back to the best of where we were on the 11 of January, which nobody liked.”

Bellerive and others say that what
is staring down in the struggle to move out the 1.5 million people
living in hundreds of makeshift camps is 200 years of economic and
social neglect that cannot be solved in months. And they warn that the
country risks a social explosion if reconstruction efforts focus solely
on the poorest of the poor.

has always struggled with the class issue, even as neighborhoods boast having wealthy and poor families living in them.

“We are living in apartheid,” said , an urban planner and government official leading reconstruction efforts.

For weeks now, Voltaire has been waging a quiet
battle to turn 9,884 acres the government seized into a mixed-used
development for both poor and middle-class families.

He sees the quake and reconstruction as an
opportunity to create a revolution in the country’s social
consciousness — not just to build homes in a country struggling with a
massive housing shortage even before the disaster wiped out 100,000
homes.

It’s a difficult battle in a society where there are
degrees of classism even among the poor. To illustrate his point,
Voltaire recalls when President , during
his first presidential term, asked him to create a housing program just
outside Cite Soleil for several slum residents who had lost their homes
to a fire.

The non-Cite Soleil residents protested, saying they did not want “assassins and thieves” living next to them.

“I said ‘They are Haitians. What do you want us to
do with them?’ They said ‘put them in a sack and drop them in the sea,’
” he recalled.

Voltaire sees the government-acquired land between
the community of Bon Repos and city of Cabaret as a chance to change
that mindset.

is providing to help plan a community that will include roads, schools, 24-hour electricity and jobs.

“We want to show there are opportunities for
everybody,” he said. “That should be a new vision, that we want to mix
all the classes.”