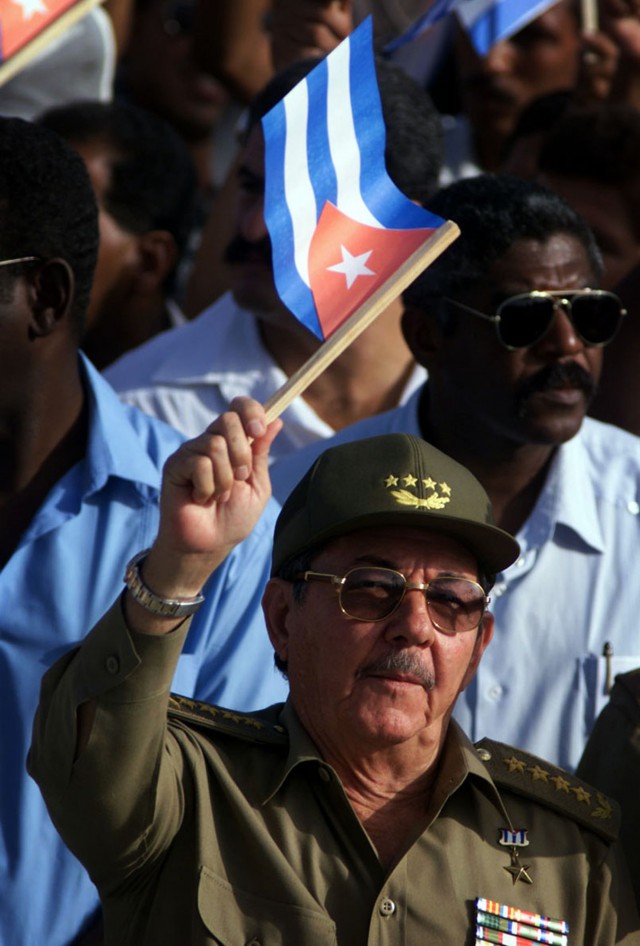 — The stunning figure was revealed by Cuban leader himself: The Cuban government and its enterprises might have more than one million excess workers on their payrolls.

That’s more than one million unproductive workers,
out of what official Cuban figures show is a total of 4.9 million
people working in formal jobs in a country of 11.2 million people.

And that’s part of the explanation, several
economists said, for a calamitously over-centralized and unproductive
economy that, for example, forces a tropical island to import an
estimated 60 percent of the food its people consume. The Cuban
government has historically insisted on keeping people officially
employed, even in unproductive jobs. Unemployment was last reported at
1.6 percent by the National Statistics Office.

About 95 percent of the jobs in
formal sector are with the government — ministries, their agencies and
enterprises — though salaries are so low, averaging about a month, nationwide, that many Cubans also have off-the-books work to make ends meet.

But the figures on excess jobs in the government and its enterprises mentioned by surprised even some Cuban economists.

“We know there’s an excess of hundreds of thousands
of workers in the budgeted and enterprise sectors (and) some analysts
calculate that the excess of jobs is more than one million,” he said
Sunday in a speech to the Cuban Communist Youth.

There are “inflated payrolls, very inflated
payrolls, terribly inflated payrolls,” Castro said before adding a
reassurance: “The revolution will not forsake anyone. I will fight to
create the conditions so that all Cubans have honorable jobs.”

It was not the first time that Cuban officials have publicly acknowledged the government has far too many employees.

The commerce and restaurant sectors alone in Cienfuegos,
smallest province, have 1,400 too many employees, according to a recent
report in the newspaper Trabajadores, run by the government-controlled , or CTC.

The province’s education sector also is overstaffed by 1,025, and the sports sector by 500, the newspaper added, quoting , a provincial official of the CTC.

What’s more, public health facilities like hospitals
and clinics in eastern Granma province alone have 3,000 unnecessary
employees, the newspaper quoted , a member of the CTC’s provincial secretariat, as saying.

“`All will remain in their jobs, but depending on
the possibilities many will be reassigned to useful and productive
jobs,” the newspaper noted. “ will never resort to the easy and inhumane formulas of neoliberalism, based on massive dismissals.”

, who served as counselor for political and economic affairs at the U.S. diplomatic mission in
from 1997-1999, said Castro’s comments indicate that he’s aware of the
massive problems facing an economy battered by the global crisis, three
hurricanes and its own massive inefficiencies.

“The government is beginning to recognize its
problems, but isn’t ready to do anything about it yet because it has
neither the capital nor the ability to create significant numbers of
new jobs,” he said.

“It indicates an incapacity to generate productive jobs that is Olympian, Guinness Book of Records,” said , former president of the . “But that’s been the Cuban government’s problem since 1962.”

“And that’s why underemployment is ridiculously high there,” said , a professor at in who specializes in the Cuban economy.

Many day-care centers and even some two-star hotels in have their own nurses and doctors — not on call, but full time, Ritter said in a telephone interview.

What’s more, when the government shut down more than
70 sugar mills beginning in 2002, their 100,000 employees kept 40
percent of their salaries while they trained for other jobs, said Jesus
“Marzo” Fernandez, a former top government economist now in .

Fernandez added that while he was initially
surprised by Castro’s one-million figure, it made sense in light of
recent reports that some Cuban enterprises have shut down because of
the lack of foreign supplies needed for production.

has severely
cut back imports in the past year because of a liquidity crisis sparked
by drops in its main sources of hard currency — remittances, nickel
exports and tourism. Maybarduk noted that
own statistics show that employment in the “communal, social and
personal sector” — not further defined — rose from 951,000 in 2000 to
2.1 million in 2008.

“This appears to be the government soaking up all
the people out there who were not in formal-sector jobs, maybe working
in the black market,” he said.

Sanguinetty said the island’s government has always
kept as many people as possible on official salaries — in part to be
able to proudly report very low unemployment figures, in part to keep
an eye on them.

“ always wanted to
have people at work, to control them,” said Sanguinetty. “They don’t
want people on the streets, so they sacrifice economic efficiency for
political efficiency.”

Though told the young communists that no one would be left without a job, he also made it clear that the economic crisis faces these days requires sharp cutbacks in government spending.

“To continue spending beyond the income means
eating our future,” he said, “and putting at risk the survival of the
revolution.”

Visit Web edition on the World Wide Web at http://www.elnuevoherald.com/