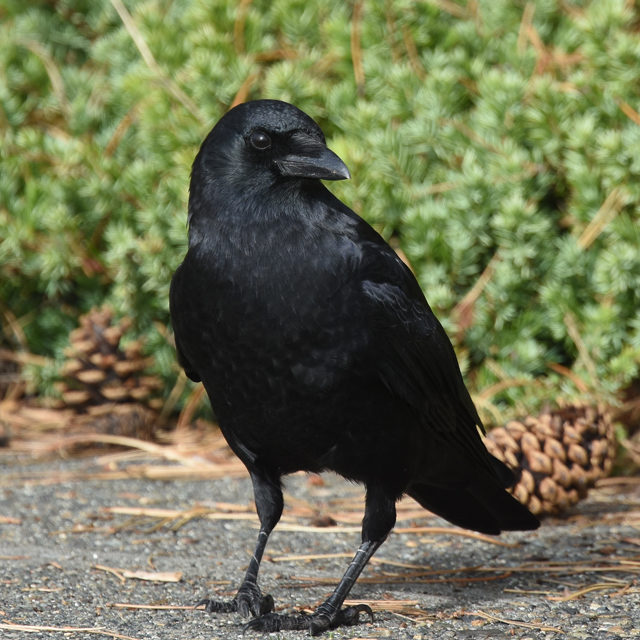 Since 2013, Dr. Greg Ebel and a team of researchers at the Colorado State University Arthropod-borne and Infectious Diseases laboratory, or the Ebel Lab, have been collecting crows, robins and other birds, sometimes infecting them with West Nile virus, sometimes releasing them, and sometimes killing them at the end of the study.

“This research is essential for understanding how viruses such as West Nile survive in and spread among bird, animal and human populations, and what happens when these viruses enter new ecosystems,” says Mike Hooker, CSU director of public affairs and communications.

But of course intentionally infecting a living being, and ending its life after the study, raised ethical red flags for those who disagree with animal testing, no matter the potential benefit to society. Those against such animal testing, like People for the Ethical Treatment for Animals (PETA), say the research being done at the Ebel Lab has negligible public benefit despite CSU’s claims otherwise.

“[The research] has failed to develop a cure, vaccine, or any clinical treatments for the disease, either for birds or humans. Crows are highly intelligent, sensitive animals who value their freedom, their families, and their lives,” PETA wrote in a statement demanding that Ebel be stripped indefinitely of his permits to collect birds.

In humans, West Nile can cause serious brain issues, and there’s no treatment — just supportive care. Colorado has had cases of West Nile every year since 2002. (In Boulder County, peak risk for West Nile occurs in late July and August, and the County uses breeding prevention and targeted chemical applications to reduce populations.)

So PETA filed a complaint and a request for investigation into the Ebel Lab’s work. Colorado Parks and Wildlife (CPW) responded and issued Ebel a citation on April 22 for five crows the lab had in its possession that were captured in 2018, warned the lab about the 32 other crows it was using for a study, fined Ebel $208 and stripped him of his scientific collection permit.

What CPW found was an “administrative oversight, not an intentional violation” Area Wildlife Manager Ty Petersburg said in the ruling — two permits are required to collect wildlife, a state and federal one. Though the Ebel lab had obtained the proper federal permits and had historically received state permits every year, the lab didn’t apply for one in 2018, a year in which Ebel had collected crows.

“Given the violations that did take place, a citation was issued for the wrongdoing. Rules and regulations must be followed, but we will continue to work with CSU faculty to obtain the proper permit to allow this important research to continue,” Petersburg said. “We are supportive of the academic research Colorado State is conducting with this human health and safety project.”

Ebel says he’s unable to speak about the process publicly, but called it “pretty frustrating.”

Hooker agrees the issue was clerical: “The annual federal permit was current during this time, but due to a clerical error, there was an inadvertent lapse in the annual state permit during the time birds were collected in 2018. … CSU communicated this error to the sponsor of the work —— the National Institutes of Health. We also are reviewing our protocol tracking processes to add additional checks to ensure licensing is in place. All state and federal permits are currently up to date for 2019, and have been since Jan. 9.”

PETA asked the U.S. Department of Agriculture (USDA) to intercede from a federal level as well, but Hooker says CSU has confirmed that the “USDA is not investigating.”

Still, it was the foothold PETA and other critics of the research needed to press for the cancellation of the Ebel Lab’s animal collection, citing the organ failure and central nervous issues that are inflicted upon wild birds when West Nile is injected. On May 6, PETA hosted a rally outside the CSU Transitional Medicine Institute to call for the end of the “school’s cruel West Nile virus experiments on wild birds.”

“Hundreds of wild birds have suffered and died in horrible ways in experiments that don’t even claim to seek to develop a vaccine or cure for West Nile virus in birds or humans,” says PETA Vice President Dr. Alka Chandna. “PETA is calling on CSU to pull the plug on these pointless and cruel experiments immediately.”

But the Ebel Lab’s work isn’t scoped, necessarily, to find a vaccine or cure for West Nile virus, the school maintains. The lab has, however, produced dozens of research articles in the years since the animal collection began, in addition to providing data on the Culex mosquitoes that carry West Nile, and the aedes aegypti mosquitoes that carry the Zika virus. The lab makes their routine monitoring information of these mosquitoes and vector-borne diseases available through the City of Fort Collins website.

Even if people disagree with the ethical concerns around trapping and killing birds, Hooker says the research is in line with state and federal guidelines.

“Understanding these interactions will help provide important information about how to save human and animal lives from West Nile and other viruses, which have devastated many avian populations, including crows and raptors in Colorado, in years when the virus is spreading rapidly,” Hooker says. “This West Nile research was externally reviewed by the National Institutes of Health, U.S. Fish and Wildlife and Colorado Parks and Wildlife agencies. CSU experts also review all research projects to ensure our practices meet or exceed the guidelines for animal care and use.”

Despite the momentum PETA and critics of the research have gained due to the protest, the increased attention to the cause, and the stripping of Ebel’s permit this year, Hooker says research will continue.

“This important research will continue uninterrupted with the state permit now issued under another name, and our understanding is that Prof. Ebel will be able to reapply for the permit next year,” Hooker says, noting that CPW will have final say over whether to approve Ebel’s permit, should he apply, next year.