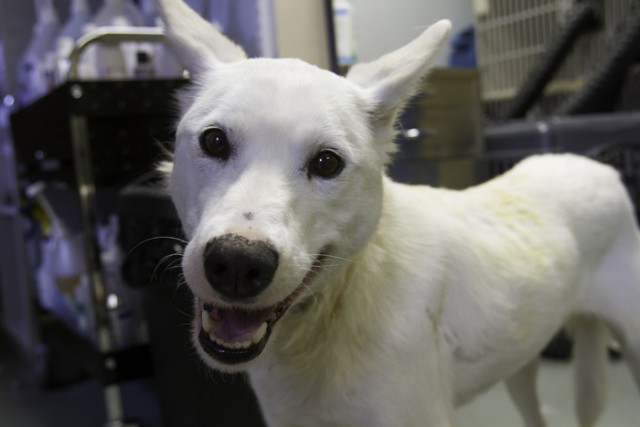 Dusk was falling on the tiny town of Churchill, Manitoba. It was the first day of November, and a 15-passenger van was trundling along the outskirts of town. The van was carrying a group of adventure tourists back into Churchill after a day of watching polar bears romp in their natural habitat (Churchill is known as the polar bear capital of the world, a premiere destination for tourists looking to catch of glimpse of the native maritime bears).

All day the group had surveyed the snowy tundra for white on white, but now in the twilight something else white, something much smaller, caught the group’s attention.

“At first we thought, ‘wow, this is a wolf,’” says Brad Joseph, an expedition leader for Natural Habitat Adventures, the Louisville-based company leading the adventure tourists on their Churchill polar bear expedition. But Joseph quickly realized it was a domestic dog, a white Husky mix.

“I jumped out of the van to look at it — it was limping really bad. I closed the back door of the van because you never know, dogs can be aggressive, especially when they’re hurt,” Joseph says. “And I squat down to get a better look. It was obviously scared, but certainly not aggressive at all, and she came up to me and sniffed my hand.”

And that’s when Joseph saw the wound on the dog’s neck — a clean, straight gash, maybe 7 or 8 inches along the left side.

While the day was mild for this time of year in Churchill — single digit temperatures but no snowfall — Joseph says the weather was slated to take a turn for the worse in the coming days. Night was falling quickly and everyone on the bus agreed the dog had to come with them.

“So we opened the back door up and the dog knew exactly what to do,” Joseph says. “I kind of patted the stairs with my hand and said, ‘Come on,’ and she just hobbled up.”

Joseph asked the group to avoid touching the pup for fear she might become aggressive due to the severity of her wounds, but the dog only wanted to rest in the warmth of the van. Around and around she turned, trying to find a comfortable way to curl up and lay down, but between the neck wound and her injured right paw, she could find no respite.

“She was just hobbling around in a circle over and over,” Joseph says.

Churchill is a town of slightly more than 800 residents. There is no vet. There is no animal shelter. As the group made the short journey back into town, Joseph and the bus driver began to brainstorm how they were going to treat a severely injured animal with no veterinarian and limited supplies. But help seemed to surface at every turn.

“One of the travelers with the group was an ER surgeon, a trauma surgeon, and she also loves animals,” Joseph says of California-based doctor Sam Johnson. “She [Johnson] said she actually likes animals better than people and she should have been a vet.”

While Joseph was hesitant to let Johnson take care of the pup for fear that the dog might get aggressive during treatment, the doctor was their only hope — time was running out for the dog. And there was still the matter of supplies — sutures, a needle, cleansing agents.

“We happened to drive past the mayor of the town, Mike Spence, and he took a look and started making some phone calls and got people to come over and help us,” Joseph says. Before long, a local paramedic and dog musher, Dan Dimuzio, was on the scene with basic supplies to treat the dog, but even then, there were limitations to what they could get their hands on.

“That first night we couldn’t tell what was wrong with her foot, but her foot didn’t look broken, so we made a splint out of No. 2 pencils, gauze and duct tape so she wouldn’t put weight on it,” Joseph says.

Joseph, Dimuzio and Johnson were given permission to use a room in the town’s public works building to treat the pup.

“I was holding on the dog’s back legs and Dan [Dimuzio] was holding on to her front, and Dr. Sam sewed her up,” Joseph says. “Unfortunately there was no anesthetic for the dog, so she had to suffer through it. You’d think the dog would get a little defensive because I know it hurt like hell, but she trusted us and she got with and we got her sewed up.”

During the medical care, Joseph says someone from the town put calls out to local mushers to see if anyone was missing a dog or knew someone who was, but in the end, after many visits to see if anyone recognized her, no one knew the dog.

With the mystery dog in stable condition, one question still remained: who was going to pay to fly the pup to Winnipeg where she could get full treatment from a vet and find a place in a shelter until adoption?

“I said, ‘Well, Natural Habitat charters a plane and we can take whatever we want,’ so we did the next day, we took her to the airport and flew her down to Winnipeg,” Joseph says.

At Tuxedo Animal Hospital in Winnipeg, Dr. Sam Johnson assisted a veterinarian in further treating the dog’s wounds and then spaying and vaccinating her. It was here that the still nameless pup (some had been calling her “Cali” after Johnson’s home state of California) met the man that would give her a real home, Corbin Hawkins.

Hawkins does contract work in Winnipeg for Natural Habitat Adventures and had heard about the dog’s harrowing journey. Hawkins says he knew before he met her that he wanted to give her a home.

“And when I actually met her there was no doubt, she was coming home with me,” Hawkins says.

There was still the matter of the dog’s name.

“Originally,” says Joseph, “somebody said we should name her and I said Ursula. I like that name because it means bear. She looks like a little polar bear a little bit in the face.”

When Hawkins met the pup he tacked on the name Gypsy — and after the travels that she’s made, it’s understandable.

Hawkins was en route to pick up Ursula Gypsy when Boulder Weekly called. The two are now settled in at Hawkins’ home in Lakewood.

“She’s a total goofball,” Hawkins says. “She’s been trying to hide bones in the couch.”

Hawkins says her wounds are healing nicely, and Ursula Gypsy seems friendly with his other dog — and it’s clear she’s happy in her new home.

“She actually just crawled up in my lap,” Hawkins says.