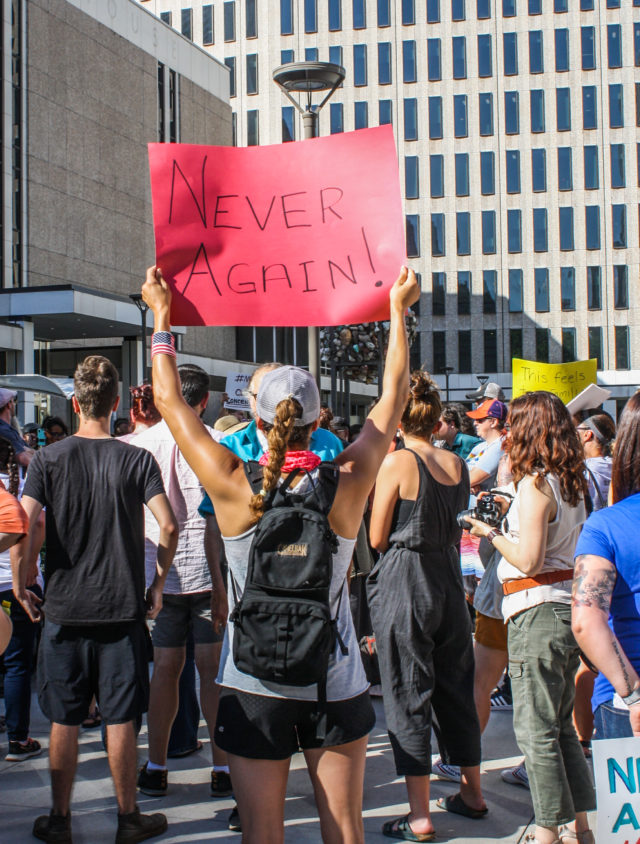 Laurel Eckhouse’s grandmother almost didn’t make it to the U.S. Born in 1920, she fled Nazi Germany for London in 1933 as a Jewish refugee. Following the death of her mother, she tried to leave Europe altogether in 1939 to join her father in the U.S. boarding the SS Athenia with 500 other Jewish refugees in Glasgow. Only a few days into the journey, a German submarine torpedoed the ship, killing 117 civilians in what would later be deemed a war crime. But Eckhouse’s grandmother survived aboard a life boat, returning to Glasgow, where she boarded another ship and arrived safely in the U.S.

“The story that I grew up with is that the life that I have exists because she found safety in this country,” Eckhouse says. “And it’s an atrocity that people are coming to this country and instead of finding safety, are finding danger at the hands of the government.”

Eckhouse is part of a growing movement of Jewish activists taking a stand against current U.S. immigration policies and practices at the southern border and in detention facilities around the country, as reports of overcrowding, unsanitary conditions and lack of health care, leading to death in some cases, come pouring in. Around the country, these activists are protesting under the slogan “never again.”

The movement, formally Never Again Action, organized quickly at the end of June, first protesting at an Immigration and Customs Enforcement (ICE) detention facility in New Jersey, where 36 protesters were arrested. There have been rallies at other facilities across the nation and at ICE headquarters in Washington D.C. since, which have shut down government offices as protestors make human chains and refuse to leave. On Thursday, July 18, Eckhouse and other organizers led a protest under the Never Again banner outside of Colorado Senator Cory Gardner’s office in downtown Denver.

Eckhouse says part of the impetus behind Never Again Action is to take back the narrative playing out in U.S. politics over the appropriateness of certain terminology, redirecting the conversation toward the treatment of migrants by the U.S. government. That narrative includes widespread condemnation of remarks made by Rep. Alexandria Ocasio-Cortez describing the conditions she observed at detention facilities along the border as concentration camps, as other politicians and government officials criticize the comparison between the U.S. and Nazi Germany.

The debate over terminology is also playing out within Jewish communities across the country.

“Some people who have either lived through [the Holocaust] or are direct decedents, find the comparisons morally reprehensible. And others who have lived through that or are direct decedents … are wanting to use that term because they want to really highlight how bad things are,” says Rabbi Marc Soloway from Congregation Bonai Shalom in Boulder. “Trauma and ancestral inherited trauma affect people in different ways.”

Evette Lutman, rabbi at B’nai Havurah congregation in Denver, personally doesn’t support using the term concentration camp or even the slogan never again in reference to what’s happening at the U.S.-Mexico border, in detention facilities around the country or at the hands of ICE. What’s happening here and now is not the same as what led to the Holocaust, she says, and “by comparing it you demean what it was that actually did happen to the Jews.”

Others don’t see it that way. For many of the never again protesters, drawing parallels between then and now is exactly the point.

“We don’t have extermination camps yet and hopefully we never will,” says Alan Rosenfeld of Boulder. “But we have camps that are holding people from different nationalities or ethnicities and holding them in really degrading, disgusting, abusive conditions. That’s exactly what happened. The children and grandchildren of survivors have the obligation to make sure that it doesn’t happen to anyone else.”

Rosenfeld’s dad was born in Berlin in 1920 and it was only through using illegal visas to get to France and then South America that he escaped the Nazis. “It’s no different,” Rosenfeld says. “There were lots of Jews who could have survived except America did not let them come in.”

Citing the SS St. Louis, which carried hundreds of Jewish refugees from Europe only to be denied and sent back, Rosenfeld says, “This is personal. Someone should have done this [for us] so we have to do it.”

Approximately 250 of the SS St. Louis passengers later died as the Nazis moved throughout Europe.

Rosenfeld is no stranger to the sensitivities surrounding terms associated with the Holocaust. Growing up his dad was adamant that he wasn’t a survivor because he never spent time in the camps. Still, Rosenfeld personally uses the term concentration camp to describe what’s happening in detention facilities.

It’s not only terms like concentration camp that can be triggering for some people within the Jewish community, Soloway adds. News of immigration “round ups” can be deeply upsetting as well. One congregate told him that, “It actually made her shake with trauma memory because her father was ‘rounded up,’” he says. “There are some very difficult tropes out there that are very triggering for people.”

Although he doesn’t necessarily adhere to the narrative that current conditions forecast the level of atrocities that played out in the Holocaust, Soloway is supportive of the Never Again Action protests, as they are in line with Jewish teachings to welcome the stranger.

“Never again is less inflammatory than the term concentration camp,” he says. “It’s a commitment that we as a people have made, not just for our own people but for all people who are targets of victimization and dehumanization.”

Since June 2018, after news of separating immigrant children from their parents at the border broke, Rosenfeld and Soloway have been leading what they call a Moral Minyan every month outside the GEO detention facility in Aurora, the next one scheduled in August. In Judaism, a gathering of 10 Jewish adults — a minyan — is required to say certain Jewish prayers, and the Moral Minyan gathers people to pray and sing in solidarity with the detainees held inside. The services have also concluded with the blowing of a shofar, a ram’s horn historically used to begin battles for liberation.

The shofar is also being used at Never Again Action protests around the country, including the one in Denver. Although Rabbi Lutman may not agree with some of the terminology being used, she also can’t be silent, which is why she chose to speak at the protest in Denver and blow the shofar as a rallying cry, encouraging other Jewish people to join her.

According to Rabbi Fred Greene from Boulder’s Congregation Har HaShem, the debate over terminology, whether or not it’s appropriate to describe detention centers as concentration camps, is largely an academic one. And it draws attention away from the issue at hand, which is the ways in which migrants are being treated.

“Sometimes using these terms will bring debate about the term and its appropriateness rather than focusing on civil rights or human rights violations,” Greene says. “Whether you want to call them detention camps, internment camps or concentration camps, the most important thing is to respond to the fact that people are being detained, and that’s unethical.”

Eckhouse agrees. In many ways, debating terminology is the wrong conversation to be having.

“People can disagree with goodwill about what is exactly the right word to use for a particular situation, but in large part, the conversation about whether [or not] these are concentration camps is a distraction from the reality that our government right now is committing atrocities against people because of their national origin,” she says.

Growing up in an undocumented family, Laura Peniche, an immigration activist and DACA recipient who spoke at the Denver event, witnessed first-hand how the stress, fear and anxiety took its toll on her parents’ health and that of her community. Denied access to work permits, driver’s licenses, a livable wage and health care, all adds up, she says.

“Denying people these basic rights is a way of denying people [humanity],” she says. “It puts you in a subhuman category.”

But watching the Jewish community protest in Denver last week gives her hope. Seeing people of faith block traffic and risk arrest for policies that don’t directly affect them is a relief, she says.

“It’s crazy how we’re all connected through history, [through] these things that have happened and are still happening,” Peniche says. “There are so many moments in history where we wish we could have gone back and done things differently. This is such a key moment where we can still change the course of history.”