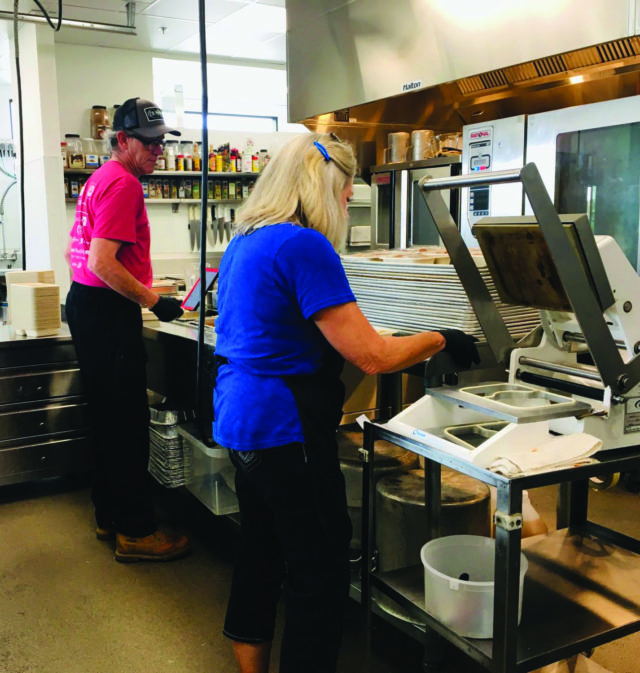 Every morning before the sun comes up, the lights at the North Boulder Meals on Wheels (MoW) location switch on. The kitchen comes to life with a host of volunteers and a handful of paid staff prepping anywhere from 150-250 meals a day; chopping vegetables, cooking food, crafting special orders to request and labeling each one before they’re loaded into delivery cars and dispatched across the city. Each and every one of those meals is hand-delivered to community members in need.

“We do 22 routes a day and every route is about seven to 10 stops. So we use 121 drivers a week,” Francea Phillips, president and CEO of the MoW of Boulder program, explains. “It’s this massive activity every morning just preparing the meals and then packaging them up and delivering them.”

It’s an operation she likens to running a military unit, with all of the planning, scheduling and problem solving. An operation that is getting increasingly challenging to pull off as inflation rises and supply chain kinks snarl access to resources and ingredients.

“I know every household is feeling [the pinch],” Phillips says. “But when you’re trying to do something this size and for this many people, it is life or death.”

That isn’t hyperbolic. Some people won’t eat without that meal delivered to their door every day. The consequences of not providing that sustenance can be serious, Phillips says.

Boulder’s MoW program is unlike most others throughout the country. At its core the mission is the same: to provide nutritious meals for community members who need them, delivered directly to their doors for free. But MoW of Boulder is distinct in a few ways. First, the monthly menu is normally stacked with meals like fried chicken, pork marsala, lemon butter chicken, and even baby back ribs—a favorite meal among their clients. They also allow people to make special requests for dietary restrictions and even personal preferences. If you’re a vegetarian, they can always make you a vegetarian dish. If you simply don’t like cooked carrots, they’ll make sure your meal doesn’t include them. Phillips says roughly 85% of the meals they send out the door are custom orders.

“[I treat] every client like my mother. They deserve respect, choice and dignity,” Phillips says. “We need to ask our clients what feels good to [eat].”

Second, Boulder’s MoW doesn’t take any federal or state funds. On the one hand, that limits capital resources, Phillips admits, but more importantly, it allows Boulder’s MoW to serve whoever it wants to serve. She explains that if MoW of Boulder were to accept federal funds, it would only be allowed to serve qualified community members of a certain age or income bracket. A quarter of Boulder’s MoW clients are under the age of 60.

“I just don’t want anybody telling me who we can [and can’t] serve,” Phillips says. To her, MoW is so much more than a delivery soup kitchen or an end-of-life service. It’s a community resource available to anyone and everyone who wants to use it, no matter the reason.

That independence also means that MoW of Boulder relies solely on corporate, foundation and public donations, plus money raised through creative social-mission ventures. Boulder’s MoW started Think Goodness Foods, a restaurant-quality frozen pie and quiche company, in 2019, and opened The Niche Market grocery store attached to the MoW kitchen at the beginning of 2022. All of both ventures’ proceeds go to funding the organization. MoW also bought a new facility three years ago in North Boulder, so it no longer rents space. Phillips says there is still $1 million left on the mortgage, but once that’s paid off, the nonprofit will have even less overhead.

The annual budget for MoW of Boulder is roughly $1.3 million. But that’s being spread thin by the current situation. With the cost of groceries ballooning and supply chain issues clogging the arteries of commerce, the cost of feeding hundreds of hungry people for free every day is becoming exorbitant. In the last year, the price of eggs has gone up 11%, the price of milk has gone up 13%, flour rose by 14% and bacon jumped by a whopping 18%. Overall, grocery prices have risen 10% since this time last year, according to CNN’s reporting. MoW of Boulder’s grocery bill has more than doubled this year, going from $13,000 a month to $30,000, Phillips says.

The reasons for those price hikes are all over the board: In the case of pork, it largely has to do with labor shortages at meat facilities caused by COVID and an increase in demand for pork as people cooked more at home. For many agricultural products, the reasons are environmental, as droughts in Brazil, Canada and the U.S. caused coffee, soy and wheat shortages. And, according to the U.S. Department of Agriculture (USDA), slow production, low rates of “hatchability” and anticipated higher feed costs are all to blame for more expensive eggs. Not to mention a highly contagious avian flu outbreak that forced farmers to kill millions of egg-laying hens.

And it isn’t just getting more expensive, Phillips says; many ingredients are just becoming harder to find. MoW of Boulder plans its menus out a month in advance so clients know what to expect, and whether or not they have any special requests. That’s become challenging as items like chicken and certain vegetables are accessible one week and not the next. The supply chain isn’t nearly as reliable as it was a year ago, she says.

Bill Thayer is the CEO of Fillogic, a logistics company that helps businesses streamline retail, real estate and shipping operations. He’s witnessed the global supply chain pile up first-hand and says that MoW of Boulder’s story is becoming a common one.

“[The cost of operation] has never been as expensive as it is now,” Thayer says. He explains that the pandemic increased e-commerce by a factor of 10, which put 10 times more pressure on the supply chain. At the same time, people were getting sick, businesses were shutting down, jobs were being lost and ships full of shipping containers were backing up by the hundreds. Now, he says, add inflation of currency, skyrocketing gas prices and a war in Ukraine to the equation and it’s a recipe for turmoil. Businesses and organizations like MoW of Boulder are going to be struggling to get the resources they need for a while, Thayer predicts.

“There’s a ‘new normal,’” he says. “These [supply chain] networks have to be much more flexible.”

He likens the supply chain problems to a rock thrown into a pool: Small rocks create small ripples (or supply chain disturbances). In the world of commerce, small rocks are expected. But what’s happened since March of 2020 is more like a boulder that’s been dropped into the water.

“There is so much churn in that pool that people are going to drown,” he says. No matter what the business (or nonprofit) is, keeping its head above water is going to take tenacity and innovation.

Lucky for Boulder, Phillips is leading MoW forward with a healthy dose of both.

“We’re trying to find every way we can to cut costs,” Phillips says. “It demands more creativity than anyone can imagine.”

She describes how they’ve shaved expenses from their margins: they stopped including salad dressing with the salads they pack with every meal. They’ve also stopped using both brown and white paper bags to designate custom from standard meals, as the cost of white bags has increased. And they’ve changed their menu to feature cheaper proteins like tuna, in place of far more expensive options, like those baby back ribs that were so popular.

“We can’t do [those meals] anymore,” she says. “And it’s sad because those were special meals for people. They really loved that.”

Phillips is also trying to get USDA approval for Think Goodness Foods, so MoW of Boulder can sell its pies and quiches in grocery stores all across the country. Not only could that help offset the increasing cost of groceries, but it could also provide extra capital to pay off the mortgage on the new building.

For all these creative ideas and for all of MoW of Boulder’s efforts to cut costs, it still needs help. If this is the “new normal,” donations are really the only way MoW is going to be able to maintain the quality of service they’ve been providing to Boulder’s most vulnerable residents.

“If there’s any way we need to change, we’ll do it. Whatever we can do, we will do,” Phillips says. “Because, failure is not one of [our] choices.”

And while Thayer doesn’t think the supply chain will go back to the way things were any time soon, he is hopeful that this new normal will level out for organizations like MoW—that the pool water will eventually become calmer.

To donate to MoW of Boulder, volunteer, or both, visit mowboulder.org.