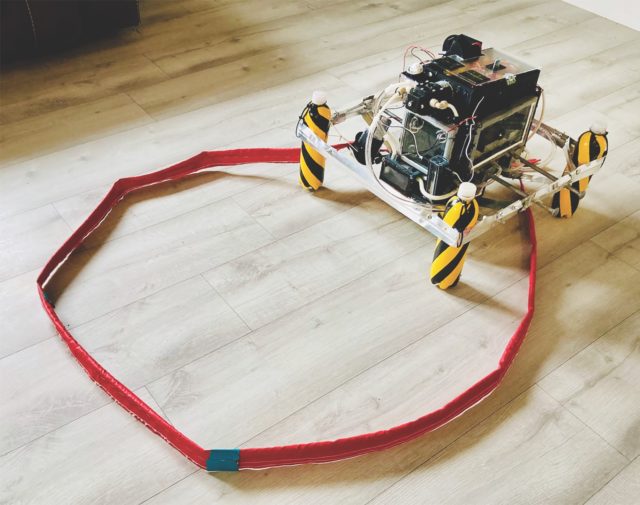 After racking their brains to come up with a project for their engineering class, Cristian Madrazo showed his group a video of the nonprofit organization Matter of Trust cleaning up an oil spill using booms with human hair attached to one end.

“That sounds awesome,” classmate Xavier Cotton told Madrazo at the time. “And it just snowballed from there.”

After months of preparation, the Front Range Community College (FRCC) students’ project—the Orca oil-vacuuming and bio-filtration drone—was recently selected as one of 12 finalists in the nationwide Community College Innovation Challenge. Along with their mentor, FRCC computer science faculty Diane Rhodes, Madrazo and Cotton are heading to the D.C. area in June to pitch their oil-vacuuming and bio-filtration drone.

Since the late-April morning when they received the letter notifying them of being finalists, the team has kicked its proposal into hyperdrive, spending time outside of class innovating and refining the original idea into a potential reality— one that can be used to clean up real-time oil spill emergencies. The project is now in its fifth iteration, and has seen substantial changes.

“When they first apply, it’s typically conceptual,” says Dr. Martha Parham of the American Association of Community Colleges. “Once they get invited to join, then the team works together with their faculty advisor to really develop and hone in the [project].”

The Orca, as the team has named its creation, could be deployed via air or sea to oil spill locations. The device extends a large boom from its body to surround and contain the surface oil. A motor then “pulls in the boom, bringing the oil closer,” Cotton explains, and a vacuum-tube slowly sucks the contaminated water into the drone, where it passes through skimmers that blot the oil from the surface. Finally, before the water is released, it makes its way through a curious component: bunches of hair wrapped in cheesecloth—referred to more scientifically as bio-pellets.

The use of hair to filter oil isn’t new, but it is an emerging technology most notably flaunted by the San Francisco-based nonprofit Matter of Trust.

“Hair picks up between two and nine times its weight in oil,” explains Lisa Gautier, president of Matter of Trust, which, among other endeavors, uses donated hair and fur to make mats and booms for oil spills or to protect storm drains. “It’s really wonderful stuff—it’s a renewable resource growing in front of our eyes. We’re very excited about it.”

There have been an average of five oil spills a year over the past decade, according to the International Tanker Owners Pollution Federation, which provides oil-spill response for a variety of vessels. That figure represents a significant improvement from the 78-a-year average of the 1970s, despite an increase in shipping. Spills can be catastrophic to the environment. The 2010 Deepwater Horizon spill—the largest in U.S. history—spilled nearly 134 million gallons of oil into the Gulf of Mexico, killing 11 people.

Typically, responders use skimmers to gather surface oil, employ chemical dispersants to aid the breakdown process, or simply ignite the oil to burn it off. None of these are perfect solutions. All three require sunlight for visibility, none of them are possible in rough seas, and only skimmers can be used in close proximity to the shoreline. Moreover, only 10% to 15% of oil is recovered with those techniques and most of it is generally unusable.

“Conventionally, spill waste is either incinerated or landfilled,” Gautier, of Matter of Trust, says. “We have tried composting it, [but] the keratin and hydrocarbons take a long time to break down.”

Nonetheless, Gautier says Matter of Trust was able to compost the waste after 18 months with a lot of “toil and trouble.” The result was a freeway-grade landscape compost, a major achievement that could be applied to contaminated hair that the Orca drones will produce.

Along with help from three industry professionals, including engineer Yash Garje, the FRCC team was able to fine tune its original boat-sized oil filtration prototype and reduce its size to the much smaller drone the Orca is today.

“When we met with [Garje], one of his concerns was that if you have this large boat with a filtration system on it and there’s a spill that’s going to require 10 or 15 of these devices” it’s going to be difficult to transport all of them at once, Madrazo explains. “He didn’t tell us specifically [to] turn this into the drone, but we developed that idea after meeting with him.”

The trio will first attend an Innovation Challenge Boot Camp in Arlington, Virginia, from June 13-16 as part of the larger Community College Innovation Challenge. There, “they’ll learn about the entrepreneurial side [of things], how to pitch projects, and they’ll connect with business leaders, legislators, and people in the field in which their idea stems from,” Parham says.

The challenge culminates at the Library of Congress, where each group will pitch an idea before an audience. Past attendees have included Sen. Tim Kaine of Virginia, and it’s likely that a legislator from Colorado or a member of their staff will make an appearance this year.

Madrazo and Cotton are headed for CU-Boulder and the Colorado School of Mines, respectively—but not before they and their Orca make a stop in our nation’s capital for the Community College Innovation Challenge.

“I’ve read some of the other proposals and it’s just amazing what they’ve come up with, so it’s a little daunting,” Madrazo says. Searching for the right answer, he eventually settles on, “I’m confident we can at least try our best, and, hopefully, that’s enough.”