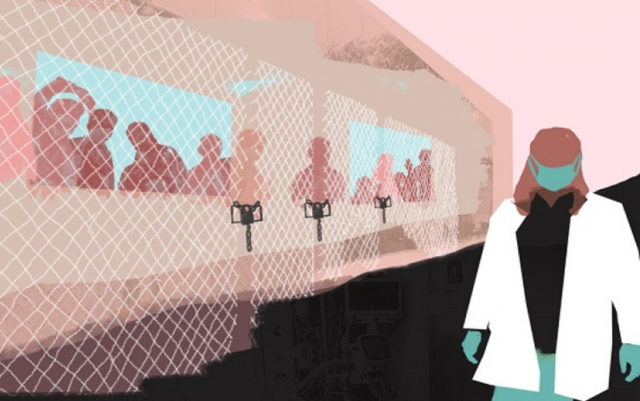 When Hilda talked to her husband, Ivan, on Tuesday, March 31, he had been in a quarantine pod for about a week inside the Immigration and Customs Enforcement (ICE) contract detention facility in Aurora. Hilda says Ivan and others are held in their cells for 23 hours a day, let out in shifts of small groups to use the shower and make phone calls. Hilda says there have been three days that Ivan was not let out of his cell at all.

“As of last week, they were still putting people fresh off the street into pods with people like my husband who have been detained there for months,” Hilda says. Ivan asked the guards to put the new people in quarantine, apart from others, since he knew how contagious the novel coronavirus is and the fact that people may not present symptoms. But that didn’t happen, Hilda says. The new people had a cough, however, and a few days later came down with a fever, and eventually, “they took those individuals out of the pod in wheelchairs,” Hilda says. Now the whole pod is under lockdown, she says.

Although officials from ICE were unable to confirm this account, the Aurora facility has reported two cases of COVID-19, both ICE employees. Around the country, there are more than 30 total confirmed cases in ICE personnel, and four confirmed cases of COVID-19 in individuals held in ICE custody, all of which are in New Jersey. Also, public health officials in Guatemala announced that a man who had been deported from the U.S., on a flight with at least 40 others, tested positive for COVID-19 on March 29. ICE says it screens new detainees, but only isolates those with fever and/or respiratory symptoms.

“It’s really important that people take a closer look at the facility and listen to the people who are actually detained inside and then take action,” Hilda says.

It’s stories like Ivan’s that inspired a week of action March 26-April 4 asking that detainees across the country be released considering the global coronavirus pandemic. Joining a national effort led by Detention Watch Network, the American Friends Service Committee (AFSC)  and the Colorado People’s Alliance (COPA) are asking people to write and make phone calls to elected officials, detailing the testimonies of those inside and asking they be released, in lieu of protests outside the Aurora facility.

“As soon as the word of the virus spreading in Colorado came, we became very concerned,” says Jennifer Piper, inter-faith director at AFSC in Denver. “The facility has a long history of mismanaging quarantine and outbreaks and also using them as a way of being the most restrictive as possible with detainees inside the detention center.”

Piper cites the medical care of an Iranian detainee who died while at the GEO facility in 2017, as well as several infectious disease outbreaks in 2019. Last year the facility saw outbreaks of scabies, mumps and varicella, or chicken pox, causing local health officials to step in. At one point, 350 detainees had to be quarantined, and the outbreaks drew public criticism from elected officials, who decried both ICE and GEO Group’s, which operates the contract facility, communication and handling of the situation.

“Mumps is a disease that is not new, one for which there is a medical vaccine, and one which the medical community is much better equipped to handle than COVID-19,” says César Cuauhtémoc García Hernández, a professor at the Sturm College of Law in Denver. “So if ICE is unable to do what is necessary to promote public health under those circumstances, then I’m pretty skeptical of their ability to do so under the exceptional situation we currently find ourselves.”

Several federal courts around the country have already ruled that ICE is “incapable of holding people in safe conditions,” Hernández says. “None have been focused on the Aurora facility, but I think it’s only a matter of time.”

On March 27, a district court in California concluded that “civil detainees must be protected by the Government,” yet the situation at detention facilities hardly provides that when it comes to COVID-19. Not only are detainees unable to remain six feet apart from each other in the facilities, they are also “forced” to touch the same surfaces as others such as toilets, sinks and showers, according to the judge. What’s more, staff and guards continue to rotate in and out, presenting a high risk of infection for detainees given that COVID-19 is easily spread by asymptomatic individuals. It comes on the heels of other similar rulings elsewhere in New York and Pennsylvania, where a judge ordered the immediate release of 10 individuals due to their heightened risk of contracting the disease due to their age or health.

“If ICE is interested in helping all of us combat this pandemic that is wreaking havoc on the planet, then I think they should be motivated to have as few people living alongside each other as possible,” Hernández says. “And that means releasing a large number of people.”

The current week of action follows a letter sent to ICE and GEO officials signed by more than 1,000 medical professionals, local elected leaders, advocates and individuals. It asks for immediate humanitarian parole for individuals 50 years or older, those with medical conditions or who are immuno-compromised, and urges them to evaluate humanitarian parole for all detainees given the circumstances. Rep. Jason Crow, who represents Aurora, has also urged ICE to release “all vulnerable individuals with non-violent immigration charges during the coronavirus outbreak” around the country, with support from more than a dozen other members of Congress, including Joe Neguse from Boulder.

But ICE has no official policy directive regarding the release of detainees in response to the coronavirus pandemic. A spokesperson for the ICE facility in Aurora says, “we release people for a variety of reasons,” in an email, and determinations are made on a case-by-case basis. Individual and public health is not listed as a consideration.

According to ICE’s guidance on COVID-19, the agency “continues to encourage facilities to follow CDC guidelines as well as those of their state and local health departments.” It says it’s monitoring those who may have been exposed to the virus by separating them in a single cell or in groups “depending on available space.” Those with a fever or respiratory illness are housed in isolation.

But Ivan, and other detainees as well as their families, say that those in ICE custody are not being protected. Ivan has told Hilda that detainees are responsible to keep the pods and cells clean, but that they haven’t been given the necessary supplies to properly disinfect the area. Plus, they are still being housed several people to each cell, despite the fact that the facility is currently holding less than half of its 1,532 capacity.

“They’re condemning them to die a little bit at a time because they’re not giving them what they need to take care of themselves and maintain social distancing,” Hilda says.

There have been reports of numerous releases from the Aurora facility over the last week, although ICE has not provided official numbers. According to Casa de Paz, a total of 36 individuals have been released since last Thursday, March 26, with 20 people released on Friday alone. But that’s only people who the nonprofit helped greet and arrange travel to family and homes out of Colorado, says founder Sarah Jackson, and does not necessarily indicate the total number.

“We have been seeing a trickle of releases since the beginning of the COVID emergency, but nothing too atypical,” writes Sarah Plastino, a staff attorney with Rocky Mountain Immigrant Advocacy Network’s (RMIAN) detention program in an email. “We have not seen any ‘mass releases’ unfortunately.”

RMIAN has provided free legal services for 40 individuals who have been released since a state of emergency was declared on March 13, but Plastino says that only a handful of people are being released each day. The organization has filed several more humanitarian parole requests for individuals still detained, and distributed a humanitarian parole request template throughout the facility for people to fill out on their own.

“Remember, there are still hundreds of people detained at the facility. They are also still deporting large numbers of people and bringing new people into the facility,” Plastino writes. “So, the fact that a few people are being released daily … is not an adequate response to protect detained people and facility workers alike.”

Hilda and Ivan fled Mexico in 2012, claiming asylum due to dangerous threats from narco-traffickers and the state, Hilda says. But Ivan was detained seven months ago, which has left Hilda with their four children, 13 and under, at home in Broomfield without a main source of income for the family.

“We don’t want him to come home to us in a box,” she says. “We want him to be released to us alive and well.”