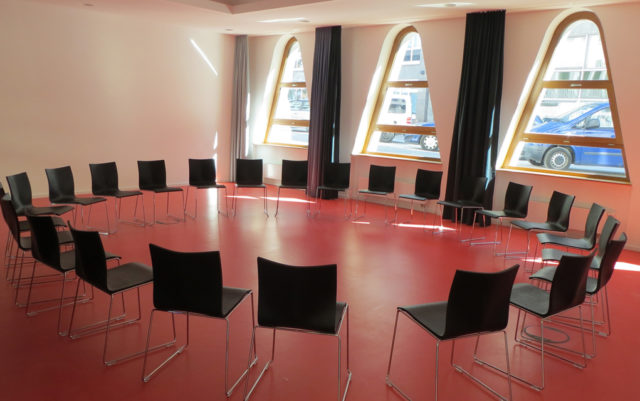 On Wednesday nights, the basement of Boulder’s Pine Street Church fills to capacity for the Alcoholics Anonymous (AA) open meeting. Facilitators lead the group in an opening prayer or statement, before members go up one by one to the podium, usually introducing themselves with the phrase, “I’m an alcoholic,” before sharing their thoughts and experiences with the crowd — the largest AA group in Colorado.

Denver LifeRing meetings, which serve as an alternative to AA, are much smaller. Around 10 people sit in a circle on the second floor of St. Barnabas Church as meeting coordinator Kathleen Gargan reads the opening statement. The discussion that follows flows freely between members, who don’t pause to introduce themselves. In this circle they are well acquainted with one another. There are no prayers, no mention of God.

Historically, AA’s success has been unmatched by other sobriety programs. But more recently, while AA attendance has seen an overall decline, newer programs like LifeRing are attracting increasing numbers in Colorado and throughout the country. Also on the rise — in what has been called a “public health crisis” — is alcohol consumption.

The percentage of people who drink at all surged during the 1990s. But since the start of the new millennium, high-risk and problem drinking have spiked as well, according to a study published in JAMA Psychiatry.

Problem drinking — consuming alcohol to the extent that it causes periodic and serious problems in one’s life, or the inability to stop drinking — also rose substantially, by nearly 50 percent.

Despite the high number of new drinkers — the study classifies one in eight adults as an alcoholic — AA continues to lose members while secular programs are starting to grow.

Gargan has been sober since 1981 and went to AA meetings for 25 years before switching to LifeRing. Gargan, who identifies as an atheist, eventually grew tired of the religious content she heard at AA meetings.

“[AA] really helped me stay sober and I made a lot of really good friends, but it was never very well suited to my worldview,” she says.

Since its creation in 1939, AA’s traditional 12 steps have always mentioned God or a higher power. Take step three, for example: “We made a decision to turn our will and our lives over to the care of God as we understood him.” These steps have not been revised since, despite culture’s changing relationship with religion over the years. During the past decade, the number of people who say they are “absolutely certain” God exists has dropped by 8 percent, according to a report from the Pew Research Center. The number of adults who describe themselves as being “religiously affiliated” has shrunk by 6 percent.

In an effort to avoid alienating non-religious members and to keep up with the changing religious climate, some AA meetings have replaced all mentions of God with the term “higher power.” But some members, like LifeRing attendee Tom Jarrell, couldn’t quite shake the program’s deeply rooted religious undertones.

“Although I appreciate the fact that AA was there, and it really did save my ass, I never bought the higher power thing, and after about 12 years it became a real problem so I sort of drifted away,” he says. “After a bad experience where I was challenged as being a speaker at a meeting I decided I didn’t need any more of this and I just quit.”

Membership at secular programs like LifeRing, on the other hand, is growing. Since 2012, the number of worldwide LifeRing meetings has increased by 300 percent. Gargan has been with LifeRing since 2003 and, anecdotally, has seen attendance increase steadily at her weekly meetings.

SMART Recovery is another successful treatment program that takes a secular approach to drug and alcohol addiction. Paul Horvath joined a Denver group after being imprisoned for 16 years following a crack cocaine addiction.

“NA [Narcotics Anonymous] and AA didn’t work for me because I don’t feel like we’re powerless over our addictions,” he says. “Spirituality and religion is all fine and good for a lot of people in a lot of ways but it really has nothing to do with whether you stick a crack pipe in your mouth or suck a drink down your throat.”

Religion aside, Horvath appreciates the way programs like SMART Recovery and LifeRing encourage crosstalk. Unlike AA meetings, where one person speaks at a time and everyone must wait their turn, SMART Recovery meetings take on a round-table format.

“That’s what makes the group as lively and dynamic and powerful as it is,” Horvath says. “You can have a back-and-forth discussion among a group of individuals as opposed to one person talking and everyone else hanging their head down low.”

Whether due to its secularity or unique meeting format, SMART Recovery has grown rapidly since its inception in 1994. The number of worldwide meetings has increased from 42 to 2,500, 1,000 of which are held in the U.S. From 2014 to the first two months of 2016, SMART Recovery launched 900 new meetings. Other secular programs available in Colorado include Women for Sobriety and Moderation Management.

While the success of recovery options like these is undeniable, many AA members see no problem with their program’s inclusion of a higher power. In fact, one member at the Pine Street Church group in Boulder, who wishes to remain anonymous, interprets the existence of a higher power as a secular notion.

“People just kind of find their own path with it and their own relationship with it. I’ve spoken to a few atheists that find the higher power to be kind of the internal truth, the authenticity itself,” he says. “So they’re still able to maintain the secular self in the room.”

Secular or not, the emergence of additional recovery groups marks a shift in a realm that has been historically dominated by AA. And these options are increasingly important considering Colorado’s drinking reputation. According to a 2014 study by the Centers for Disease Control and Prevention, Colorado and other mountain-region states have the highest rates of alcohol-related deaths in the country. Pitkin and Summit counties lead the nation in overall drinking, with approximately 78 percent of drinking-age adults having at least one drink per month.

Whether it’s AA, LifeRing or SMART Recovery, those dealing with addiction have more options than ever before when it comes to recovery with meetings all over Boulder County and most parts of Colorado.