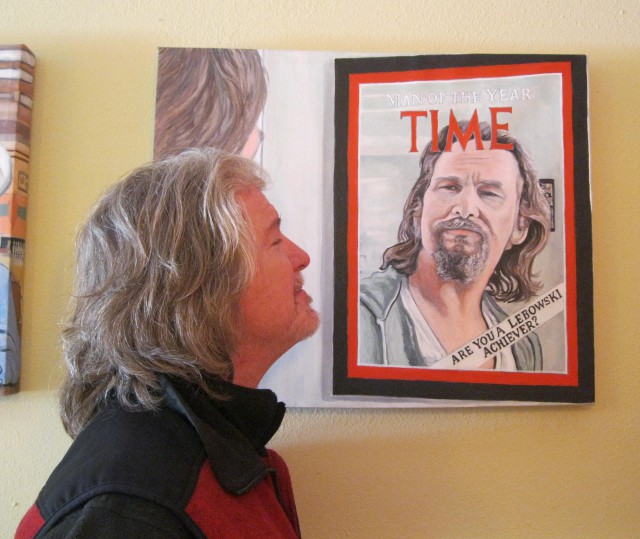 Ron Bostwick, the Boulder International Film Festival’s executive producer of special events, grew up in Maryland and then lived in Boston, where he went to college, for about 20 years. But he’s been living in Boulder for about a dozen years now and can’t imagine living anywhere else. Bostwick, who has been getting “Man, you look like Jeff Bridges!” comments since Starman — and moreso since The Big Lebowski — describes his occupation as “freelance event coordinator.” He worked at KBCO until a few years ago, and now the long-haired, enthusiastic promotions guru has found his passion doing live interviews for BIFF.

Onstage, Bostwick is a pro — sort of a mixture of James Lipton (of Inside the Actor’s Studio), Dick Cavett and Bridges’ “The Dude.” Two years ago at the Boulder Theater in front of a packed, dressed-tothe-nines Boulder Theater crowd during BIFF’s gala ceremony, Bostwick was also comedic fodder.

Boulder Weekly: Walk us through that moment at the 2009 BIFF when Chevy Chase was given an award, sat down next to you in front of a sold-out Boulder Theater, listened to what you had to say, and …

Ron Bostwick: I feel like you’re going somewhere specific with this.

BW: He responded to your first question by asking, “Can I piss in your mouth?”

RB: That was the second thing he said to me.

One of my early questions to him was about him being a class clown, and he stopped me and said, “I wasn’t the class clown.” He said, “Class clowns do this,” and he turned to me and very strongly said, “You’re an asshole!” And when he did that, I thought to myself, “Excellent.” Because that tells me he’s very comfortable with me. So we went on, and then another time came when he had the opportunity to turn to me and say what you said. And at first I was a little taken aback, but I noticed that after he said [“Can I piss in your mouth?”] to me and turned to the audience, because the audience was laughing, he just gave me a quick check to see my reaction. And because I was laughing, he knew that he and I were gonna work well together.

BW: Have you had any interviews that completely bombed?

RB: No, I don’t think so. And I say that because I’ve pretty much been ready for all of the interviews that I’ve done, and not just the “tribute” interviews but also the post-film
interviews for BIFF. I watch all of the films in advance. I do some kind
of research on all of the issues so that I can speak knowledgeably. For
instance, two years ago we had a film about the monks in Burma
protesting the conditions there, and onstage afterwards we had a Boulder
resident who was a former Burmese princess from 50 years ago who lives
here. Before that night, not only had I seen the film twice, but I did
my research on who this woman is and the life that she led. So that
interview went well because I totally knew my subject.

BW: How did you get involved with BIFF?

RB: Well,
I was very fortunate that for the last year of my tenure at KBCO I was
the promotions director. [BIFF founders] Kathy and Robin [Beeck] came to
me, and I cut the promotions deal for KBCO to be the radio sponsor [for
BIFF]. We really hit it off because I’m a film fan; I’ve held an Oscars
contest for 20 years. When I left KBCO they came to me and asked if I
would help with some projects that they were doing for BIFF. And I’ve
just worked for them every year ever since, for five years now.

BW: Is it essentially the same process every year?

RB: Well,
it can’t be exactly the same, although there are some commonalities
year after year. We, as a committee, sit down in the summertime and say,
“Who would we like to come? Who fits what BIFF is about?” And we look
at a number of different people, and we don’t always get our first
choice, because these people are very busy. But once those people are
chosen and we know they’re coming, that’s when I start doing my research
of watching their films, reading what I can, finding things on YouTube,
finding other interviews online, and trying to know as much about the
person, their work and their life, and who they are, as I can. I look at
my job sitting on that stage in two ways: I want to walk that line of
making it entertaining but informative. And I try to make that person
[I’m interviewing] comfortable by creating a respectful video that we
show beforehand, but also by knowing as much as I can about them so that
they see that I’ve done the homework to be ready to talk about whatever
they want to talk about.

BW: What’s exciting for you about this year?

RB: When
people ask me what I want to do when I grow up, I tell them I want to
have Charlie Rose’s job, and I feel like I already do, because of BIFF. I
feel like this year will be another Charlie Rose weekend for me,
because I get to interview James Franco eight days before he hosts the
Oscars; Oliver Stone, who arguably is one of the top 10 American film
directors of all time; and also the producer and director of our
opening-night film, a documentary about the Troubador club in Los
Angeles. Being a music fan since the ’60s, to be able to sit with these
guys and talk about music and about film — my two biggest loves — is
huge for me.

But
then, Sunday afternoon I get to be what I think might be a highlight of
my life, where I’ll do the postfilm Q-and-A with [U.S. Rep.] John Lewis,
after the film Freedom Riders. As a kid who grew up outside of
Washington, D.C., reading the Washington Post every day, and remembers
Martin Luther King being killed, it’s a big deal. It’s an honor for me
to sit with Rep. Lewis. To think of these four days, of who I will sit
and talk to, it makes me feel like I already am Charlie Rose. Just in
Colorado.