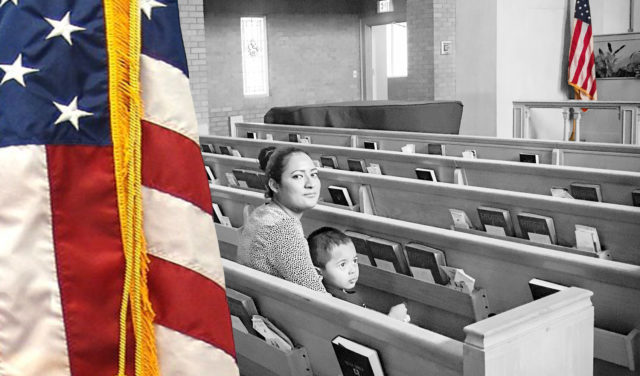 Araceli Velasquez fled El Salvador by herself in 2010 when she was 19 years old. She left to escape the grip of an ex-boyfriend whom she says, through an interpreter, was threatening to kill her. She traveled for 15 days on buses all the way to Mexico.

“I was at one point so hungry,” she says, choked by emotion. “I went a whole week without eating any food, just water.”

She’s hesitant to share much detail about her life in El Salvador or the journey to the U.S. border, repeatedly saying it’s difficult to talk about, her eyes tearing up ever so slightly.

“The road in Mexico is really difficult,” she says. “Just like you find so many good people who help you, there are also a lot of not-so-great people along the way.”

She paid a smuggler to help her cross into the U.S., but was caught by Border Patrol and taken to a detention center in Houston where she spent about six weeks.

“At first I was asking them to deport me as quickly as possible because I was just so desperate in detention,” she says. “But at the same time I was afraid for my life that if I was deported to El Salvador, the conditions would be worse. This person would find me again or even worse, I’d be killed.”

In talking with volunteer lawyers and people from different faith communities who visited her in detention, Araceli learned she might be a candidate for asylum.

“When I came, it was so early on, people in Central America and El Salvador didn’t even know asylum was an option. You were just fleeing for your life and you hoped you’d make it over the border. You had no idea that you could claim asylum.”

After filling out the application and passing her credible fear interview, the first step in the asylum process, Araceli was released on bond into the U.S. while her application was reviewed.

She called cousins in Colorado and moved to Denver while she waited for news from Immigration and Customs Enforcement (ICE). At first, Araceli spent time watching her cousins’ kids so their parents could work, unable to find a job herself without work authorization.

A year or so later, she met her husband, Jorge, at a party in Denver. She lights up talking about their meeting, unable to hide her smile.

“When I arrived in the U.S. and was released from detention it was like being reborn. I was finally able to live again,” Araceli says. “Then even more so when I met Jorge, the father of my children. Almost from when I met we went everywhere together. We shared life, a life that the two of us were building together.”

The couple has three boys, ages 4- and-a-half, 2 and 11 months. Jorge is also from El Salvador, lived in the U.S. for nearly 20 years and was granted Temporary Protected Status (TPS) in 2001.

TPS is given to immigrants from specific countries experiencing natural disasters, wars, gang and domestic violence or other humanitarian crises, and grants work authorization until people are able to return home. For El Salvador, the protections have been renewed every 18 months since 2001, but are set to expire again in March 2018.

Regardless, Jorge’s protected status doesn’t do anything to help Araceli with her immigration case. In the midst of establishing their life together in Denver, Araceli was repeatedly called back to immigration court and the couple spent thousands in legal fees. Araceli says she never missed a check-in with ICE or a court date and filled in all the paperwork the lawyer asked her to. But, she says, the lawyer never prepared her for her court appearance and she was caught off guard by the in-depth questions the other lawyers and judge asked her. “For me, speaking about my life in El Salvador is very difficult because whenever I speak about it, it is like reliving it.”

In 2013, when she was pregnant with her first son, her petition for asylum was denied.

She appealed the decision but lost. She then appealed to the district court but lost that as well, and was given final orders for deportation. But fearing for her life, she didn’t comply. She missed a scheduled check-in with ICE in January 2016, having discovered she was newly pregnant with her third son. When immigration came to her house in July of that year, she was eight months pregnant and so was granted a one-year stay of deportation, which expired last month. Although she applied for another stay, she was denied. So when it came time for another ICE check-in on Aug. 9, Araceli instead claimed sanctuary.

Araceli is now living at Park Hill United Methodist and Temple Micah. The two congregations share a facility in East Denver. It is the newest sanctuary space in a growing coalition of faith communities committed to providing shelter for immigrants resisting deportation in the greater metro area, which includes Boulder County. Coordinated by the Quaker nonprofit American Friends Service Committee (AFSC), there are now 11 congregations comprising the Denver Metro Sanctuary Coalition. Previous hosts First Unitarian Society of Denver and Mountain Views Friends Meeting, which have both hosted immigrants this year, are undergoing construction and permits don’t allow residents, even those seeking sanctuary.

“More folks that have been here a long time are considering sanctuary as a serious option, and we don’t have enough congregations to host people who are interested,” says Jennifer Piper, interfaith coordinator for AFSC. At the same time, the statewide sanctuary movement is growing as faith communities in Colorado Springs officially formed a similar coalition in June and a group in Fort Collins is in the process of doing the same, Piper says. And Rosa Sabido, a Mexican national, has been living in the United Methodist Church in Mancos, outside of Durango, since the beginning of June.

In Denver, Piper says AFSC is currently working with four families from Central America, like Araceli, who fear deportation under the Trump administration’s shifting policies.

“To be honest, I was a little bit scared and nervous to come here,” Araceli says of the church. “I wasn’t sure how the people from the faith community would see me or treat me. I never imagined that they would accept me to the level that they have and make me feel so welcome and so part of things here.”

The area she now occupies with her young sons wasn’t ready when she moved in, so the family spent the first week on beds set up in the basement youth room, replete with a large TV, couches and a large, lime green rug.

She has since moved to a small area in another part of the basement, where the host congregation is constructing a kitchenette and remodeling the bathroom. The family sleeps in a small room resembling a large closet. Tall cabinets create a barrier between a living area and what looks like storage. There are no windows. But Araceli seems relieved to know she and her boys are safe.

“When there’s the kind of need that we have, or I have,” Araceli says, “you go wherever you can.”

Araceli says she is getting more comfortable living in the church, although the first few weeks have been difficult. The boys live with her during the week, but return to the family apartment with Jorge over the weekend. When it comes time for the family’s traditional Sunday lunch outing, she stays behind.

“It’s difficult because I don’t have the words to explain to a 4-year-old or a 2-year-old why I can’t be outside with them, why I can’t go to our house,” she says. Plus, her oldest, named Jorge after his father, started preschool this week and Araceli wasn’t able to take him.

“I have been dreaming for years the day that Jorge would first go to school,” she says. “That’s a memory that I won’t get back.”

For now, Araceli and her family are hunkering down for the long haul. They are in the process of hiring another lawyer who thinks there were some mistakes made in her previous case, although they’re not certain if it is enough to get her case reopened.

“I am prepared to stay here as long as it takes,” Araceli says, insisting that returning to El Salvador is not an option. “It would be risking my life, and if I took my children with me, it would be risking their lives.”

She hasn’t really spoken to her family since she left the country and knows virtually no one still there.

“When I left I had to cut off contact with my parents because of the threats against me,” she says. “Every once in a while I might speak to someone from my family but it’s very secretive and most people don’t know where I am, that I’m in Colorado.”

Plus, the situation in El Salvador has grown worse since she left more than seven years ago. El Salvador had the highest murder rate in the world in 2015, while its violent murder rate spiked by 70 percent. Some 60-70,000 Salvadorans belong to gangs, authorities estimate, with 500,000 more financially dependent on them. Violence against women is also increasing, as more than half of Salvadoran women say they’ve experienced violence in their lives; a quarter say they’ve experienced sexual or physical abuse. At the same time, Amnesty International reports rampant use of excessive force and extrajudicial killings by both the police and military. It’s unimaginable for Araceli to go back, let alone bring her young sons with her.

“Nobody where I’m from sends their sons to school anymore because they are immediately recruited by one gang or another gang,” Araceli says. “A lot of the people have left in order to be able to support their kids. If gangs find out their parents are in the U.S. then they will kidnap their kids, assuming that they have all this money here when really most of us are just getting by.”

The need for sanctuary space is likely to increase in the coming months as the national immigration debate appears to be heating up once again. President Trump is widely expected to end DACA, the Obama-era program that protects immigrants who came to the U.S. as children from deportation, soon after the Labor Day holiday. Ten states are threatening to block the program in district court on Sept. 5 if he doesn’t act.

This pending decision by the Trump administration comes on the heels of an Aug. 16 directive by acting Secretary of Homeland Security Elaine Duke to terminate the Central American Minors program, which allowed youth from Central America to apply for the opportunity to join parents already living in the U.S. Driven by increasing gang violence, the highest homicide rates in the world and widespread political instability, migration from Central America, particularly the countries of El Salvador, Guatemala and Honduras, has increased tenfold since 1980. It also remains unclear if the administration will extend TPS for these Central American migrants as it is set to expire early next year.

And these critical changes in policy are in addition to the continued threat to crack down on undocumented immigrants all across the U.S.

It seems only one thing is certain: more and more people like Araceli and her family will be needing a place to seek sanctuary soon.