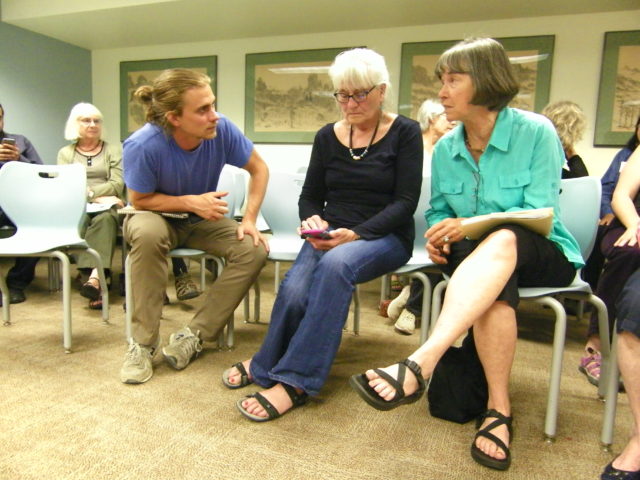 Local government and school district officials and staff are meeting with out-of-state Arapaho tribal members on June 7-8 to discuss how to forge restorative relationships between the Arapaho people and the Boulder County community.

The series of face-to-face private meetings are part of the “Welcoming the Arapaho People Home” project organized by the grassroots group Right Relationship Boulder (RRB).

Topics of discussion include access to Boulder County Parks and Open Space (BCPOS) land for use by native communities, incorporation of Arapaho history and culture into the Boulder Valley School District (BVSD) curriculum, and development of interpretive signage that’s more inclusive of Arapaho history.

Sociologist Paula Palmer, one of four RRB co-leaders, calls the meetings “very preliminary,” adding that the ultimate goal of the visit is to not only improve the relationship between the Arapaho and the local community, but to plan for Arapaho participation in Indigenous People’s Day (IPD) events Oct. 6-8.

The list of participants in the talks include four Northern Arapaho delegates from Wyoming’s Wind River Indian Reservation and three Southern Arapaho delegates from the Cheyenne and Arapaho Tribes of Oklahoma. They’ll meet with representatives of Boulder’s City Council, Human Relations Commission, Open Space and Mountain Parks and City manager’s office, as well as members of the Lafayette City Council and Cultural Arts Commission, BVSD, BCPOS, and the mayor of Longmont. Three churches are sponsoring meals.

“That resolution clearly states the history of the Arapaho people who were here when settlers and miners came to the Boulder Valley. We thought the first thing we should do is learn about Arapaho people,” Palmer adds.

The idea for the campaign started when Arapaho filmmaker Ava Hamilton coordinated tribal visits in late 2017 between indigenous leaders and the RRB members. In Wyoming, RRB met with the Elders Committee, and in Oklahoma, with a large group including traditional tribal leaders, tribal government representatives and educators.

Summaries of Arapaho responses were presented in December to the Boulder Human Relations Commission, which funded the trips with a $3,000 grant.

Boulder City Arts Commissioner Erica Joos describes her commission’s donation as an effort to give voice to those who’ve been disenfranchised. She also comments on the irony of Colorado drivers with “NATIVE” bumper stickers.

“I think people have really strong connections to this place, and everybody is entitled to that. I think an argument could be, well, they (the delegates) don’t live here, they don’t really have a say, but in my opinion that’s ignoring some ancestral ground-breaking, the actual settlers of this area,” Joos says.

Katy Waechter, Boulder Open Space and Mountain Parks cultural resource coordinator, will tour the city’s historic Fort Chambers site on 63rd St., where local militia gathered before the 1864 Sand Creek Massacre. At least 150 peacefully encamped Arapaho and Cheyenne Indians were slaughtered in the massacre. Palmer hopes delegates will be able to offer input about potential site uses to the city.

“I think before you’re able to understand why this is important, first you have to understand the history,” Young says, adding that when it comes to securing funds for the campaign, “In the grand scheme of things, it’s not that much money. … I don’t think constituents would have any issue with reaching out to people from out of town. This is their land, we stole their land; if anything, it’s entirely appropriate.”

BVSD Assistant Superintendent of Instructional Services and Equity Samantha Messier likewise feels that learning Arapaho history and culture, and that of other area tribes such as Ute and Cheyenne, is essential for understanding and redressing social inequities, as evidenced in, for example, academic achievement gaps.

“There’s no doubt in my mind that we could do a more effective job of teaching about the history of the indigenous peoples of this state. I think there are a lot of pieces of the story that are missing,” Messier says. “I plan to do a lot of listening. Because what I’m curious to hear from them is what could we be doing better? What’s the story that needs to be told? How would they tell the story?”

Messier wonders whether getting real with local history might be more challenging compared to say, BVSD’s new approach to slavery.

“I think there are parts of our history that are emotionally really difficult for people to look at and think about, but if we’re not truthful about those, if we don’t actually allow ourselves … we’ll never get to the place of reconciliation where the wounds of the past can heal,” Messier says.

Hamilton explains the significance of the Arapaho request for land.

“It was a total relationship. People were born and they died here, they knew the plants and animals and they had a relationship with everything, with that cycle of life here and with the land. They called this home even if they don’t hold title to property the way all of our land is today,” she says.

Delegates will tour BCPOS land under consideration for native use. According to the 1997 donation terms of two parcels in northern Boulder County totaling more than 500 acres, public access is prohibited at one parcel until at least 2030, and permanently banned at the other, Jeff Moline, BCPOS resource planning manager, says.

BCPOS can allow discretionary access at both parcels “for valid educational, scientific or cultural purposes.” At the west parcel, BCPOS is required to consult with “appropriate Native American tribes to promote the cultural interests of Native Americans and to protect archaeological resources on the property.”

Moline says any land-use designations would likely have to go to Boulder County for review.

But details, for now, are secondary for many who are energized by the talks. For Jake Matlak, fiscal sponsor, Philanthropiece Foundation program director and RRB co-leader, the campaign signifies a willingness to connect.

“Honestly, I feel anxious, or scared, I don’t know if those are the right words,” he says. “The work that’s happening here is valuable in its own right of educating the community and getting more people involved, but ultimately the point is about forming relationships on the rocky ground of our past.”

And Hamilton is optimistic.

“I’m inspired by the humanity, by the goodness of the people of the land, even though their ancestry may be on the other side of the planet, they love this place as much as we do,” she says.