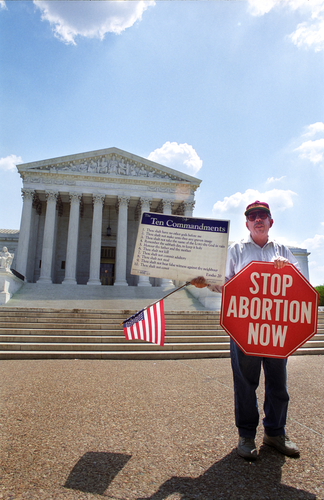 A Gallup poll
released this week showed that the percentage of Americans who identify
as “pro-choice” is at an all-time low: 47 percent call themselves
pro-choice, while 50 percent identify as pro-life. But does it really
matter?

Most Americans still believe abortion should be legal, and the
outrage over recent attempted rollbacks of women’s reproductive rights
has sparked a new wave of activism among feminists online and off.

The anti-choice movement may be winning on labels, but they’re losing on the issues.

While the decreasing number of Americans who call themselves
pro-choice is disheartening to hear – we’re one percentage point lower
then the previous record low in 2009 – only 20 percent of people polled
think abortion should be illegal across the board. 52 percent believe
abortion should be legal in some circumstances, and 25 percent believe
it should be legal in all cases. And when the polling questions are more
nuanced than a simple dichotomous pro-choice/pro-life identification,
the answers people give tell a much different story.