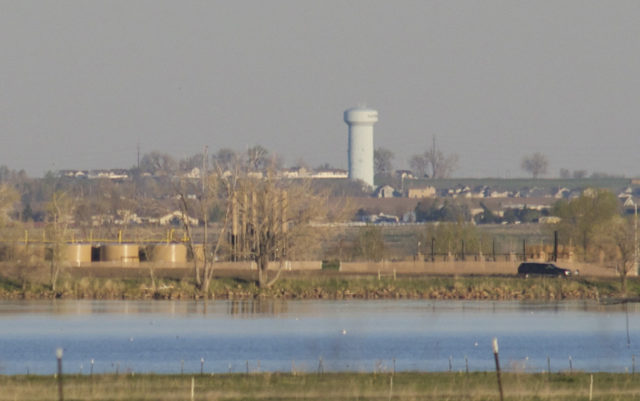 High levels of harmful atmospheric pollutants (such as nitrogen oxides, methane and volatile organic compounds (VOCs)) are regularly blown into Boulder County from oil and gas wells to our east. The wind carries these emissions across the plains, an invisible gaseous river, flowing over county lines and between jurisdictions.

That’s according to research from Dr. Detlev Helmig, an associate professor at the University of Colorado’s Institute of Arctic and Alpine Research (INSTAAR), which he presented at a meeting of 350 Boulder County last Thursday, Feb. 21.

Helmig studies biosphere-atmosphere trace gas fluxes and their environmental controls. He and his team have been measuring atmospheric concentrations of several key pollutants at a monitoring station at the Boulder Reservoir since the spring of 2017. Over the last several months he’s been on the speaking circuit, presenting his findings — giving similar talks for the Boulder County Commissioners, Longmont community groups and others.

His research was done in partnership with the Colorado Department of Public Health and Environment (CDPHE) and was sponsored in large part by Boulder County (with some interim support from the national nonprofit Earthworks). The study aims to measure the effects of oil and gas emissions on air quality in this county, something that has not previously been quantified or explored to this extent. And the results suggest that those effects are far from trivial.

INSTAAR’s website for the Boulder Reservoir monitoring station provides “near-real time monitoring” of what Helmig and his team are currently detecting in the air: from ethane, butane and benzene levels, to nitrogen oxides and methane. It allows anyone interested to check in on the content of the air in the County, to see what they’re breathing at any given time of day.

So far, that website has over 16,000 views, which Helmig points out is reflective of people’s genuine interest in this subject.

Since April 2017, Helmig and his team have been recording and compiling this data: running back-trajectories for emission spikes, calculating the travel time for different gasses, the distance between source wells and their monitoring stations, wind speed and direction. They catalogued event after event after event, correlating each one to their downwind measurements from the Reservoir.

“We focused on nitrogen oxides, methane and volatile organic compounds because, on the large scale, those affect the greatest number of people,” Helmig said. “And they don’t just impact people that are in close proximity to these [drilling] operations.”

Time and again, Helmig said, he and his team watched concentrations of these emissions spike in Boulder County when northeasterly winds picked up. It indicates a clear oil and gas correlation and suggests that the air Boulder’s breathing is not as clean as many would like to imagine.

Nitrogen oxide can cause inflammation of people’s airways, lung infections and can increase the risk of respiratory conditions. High levels of methane can cause headaches, dizziness, nausea and even suffocation. And, while the health effects of VOCs range widely, benzene, which researchers have observed flowing into Boulder County (likely from oil and gas operations), is a known carcinogen that can be deadly in high enough concentrations.

Then there’s ozone, the product of reactions between VOCs, nitrogen oxide and sunlight. In-and-of-itself, ozone pollution presents a significant problem for Boulder County and the Front Range: Since 2004 this region has exceeded the U.S. Ambient Air Quality Standards for ground-level ozone. It’s something the County calls a “serious concern,” on its website.

While some of the emissions measured at the Boulder Reservoir may have originated at oil and gas wells in this county, most come from elsewhere. Air from other heavily drilled places like Weld County is often blown into Boulder, according to Helmig’s research, which makes this problem particularly difficult to remedy. Oil and gas emissions are widely shared between counties with greatly differing policies on oil and gas activity, and that means a real solution will necessitate state action.

State Democrats, who now hold  both the legislature and the governor’s mansion, campaigned in 2018 on a platform of stricter oil and gas regulations and more local control. They are now preparing to put forward their legislation as early as March, which they claim will do just that.

On the other hand, skeptics of the Democrats and their new rules claim that the oil industry has been too involved with the process for any meaningful reform. Time will tell.

When Helmig finished his presentation, people broke into small action-groups to discuss measures for reducing the risk to air quality at the Boulder Reservoir and throughout the county. In large part, those “actions” boiled down to calling and emailing state representatives.

“Clearly not nearly enough is being done to protect people from this,” says Micah Parkin, the executive director and cofounder of 350 Colorado, which hosted Helmig’s latest presentation, as well as a climate lobbying day at the state capital earlier on Thursday. “I don’t think most people are even aware of it or how serious it is. And meanwhile more and more fracking permits are being allowed every month.”

As more wells are drilled in the regions to Boulder’s north and east (and potentially even within County limits) the air quality here will likely worsen if Helmig’s findings are anything to go by. Whether or not those calls and emails to our state representatives will speak louder than the money and influence of oil and gas companies remains to be seen.