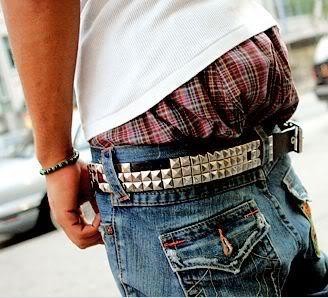 CHICAGO — When police arrived outside a Lynwood,
Ill., party last month to check for curfew violators, Bowen High School
student Cantrell Tremble, 18, wasn’t worried about getting a ticket. So
he was surprised when police cited him for the way he wore his pants.

“(The officer) looked and saw … I was sagging,” Tremble said recently. “It’s very unfair. Everybody dresses the same way.”

While
the case against Tremble was dropped after the ticketing officer didn’t
appear at a hearing, a Chicago Tribune review of police records found
that south suburban Lynwood is assessing fines as high as $750 for those
caught wearing sagging pants on public property. Police, who say the
$750 fines were made in error, more commonly assess fines of $50 to
$250.

Lynwood in 2008 was the first Chicago suburb
to enact a ban on low-hanging pants, but others have followed suit. The
most recent was neighboring Sauk Village, which in March outlawed pants
that hang more than 4 inches off the hip. Last month, downstate
Collinsville narrowly approved its own saggy-pants ordinance.

“It’s
not right,” said Lynwood Mayor Eugene Williams of the fashion. “It’s
ugly and stupid. Can’t you respect my little kid or my mother when
you’re out? I wouldn’t walk around my own house with my pants hanging
down — why do I have to accept that out in public?”

The
Illinois ACLU criticized the ordinance as racial profiling when it was
enacted, but has yet to challenge it in court. Williams, who is black
and grew up in the Robert Taylor Homes, said the law doesn’t target only
African-American men. He has also seen white and Hispanic youths in
town with their pants sagging, he said.

Police did not provide the race of those who have been ticketed.

For
Lynwood leaders, the ordinance is a way to take a stand against a
fashion many find offensive or indecent. The small bedroom community of
neatly kept homes and a single strip mall takes pride in itself,
Williams said.

“This ordinance works in Lynwood,”
said Williams. “You don’t have to run around with the saggy-pants
patrol. Everybody in our town knows (the law).”

Though
the fashion has been around for two decades, the last few years have
seen a legislative backlash. Some of it may be generational, with baby
boomers whose bell bottoms ruffled their parents’ feathers now irritated
by young men exposing their underwear in public.

Chicago
suburbs from Evanston to Midlothian have considered such bans. And
towns in states across the country continue to pass them, including
earlier this month the small Georgia town of Jonesboro, which bills
itself as “The Official Home of ‘Gone With the Wind’ ” and was
reportedly concerned about what sagging pants may do to its tourism
industry.

In
May, the public bus system in Fort Worth, Texas, said its drivers would
start turning away passengers who refused to pull up their pants. A
spokeswoman said the policy change has been welcomed by “our
non-saggy-pants riders.”

Florida recently enacted a
“Pull Up Your Pants” bill, requiring school districts in the Sunshine
State to discipline students who wear “clothing that exposes underwear.”
Pastors have reportedly marched the streets of Winston-Salem urging
residents to “pull them up,” and a South Carolina man recently released a
children’s book entitled “Oliver Vance Pull Up Your Pants!”

The
issue even came up during Barack Obama’s 2008 presidential campaign. “I
think passing a law about people wearing sagging pants is a waste of
time,” Obama told MTV. “Having said that, brothers should pull up their
pants.”

It’s unclear what effect the new laws
have. Lynwood has cited one man three times in 2008 and 2009 for wearing
saggy pants. The man could not be reached by the Tribune.

The
town has issued about 40 tickets under the ordinance. So far, this year
is shaping up to be the busiest. At least 15 tickets for low-hanging
pants have been written, more than the past two years combined.

For
critics, even 40 tickets out of the thousands officers write each year
is too many. Lynwood records show that 10 cases, in which fines of $100
or $250 were assessed, have been put out to collections. Only two
saggy-pants offenders have paid their fines, records show. The village
ordinance allows for fines from $25 to $200. A hearing officer
determines the amount.

“When you start to
criminalize dress codes and suggest that the police are now responsible
in some ways for how people are dressed on the streets, I think it’s
very troubling,” said Ed Yohnka, Illinois ACLU spokesman.

Markham
resident Raymond Shegog, 18, recently arrived for a court hearing at
Lynwood village hall dressed neatly in a blue polo shirt and baggy blue
jeans. The hearing officer, after noting “I see that you’ve got your
pants up today,” dismissed the case when the police officer didn’t
appear, urging Shegog to use the $50 he could have been fined to “buy a
belt.”

“My pants were sagging, but you couldn’t even see my butt because I had my leather jacket on,” he said.

Sauk
Village has yet to ticket anyone under its ordinance, which was
suspended shortly after being approved so town leaders could study a new
fashion development. Town Trustee Edward Meyers, who oversees the
ordinance committee, said they were looking at making an exception for a
new type of pants — Sagz Jeans — that button into underwear and allow
various levels of sag but don’t expose anything.

Bans
on certain types of clothing are nothing new. Up until a 1978 Illinois
Supreme Court decision that overturned it, Chicago banned people from
wearing clothes of the opposite gender “with the intent to conceal his
or her sex.”

Two men were arrested in 1974 after
finishing their breakfast at a Loop restaurant. They were taken to a
police station where they were required to “pose for pictures in various
states of undress” and then charged with violating a city code,
according to the court ruling.

During the recent
Lynwood Festival last week, Williams said he saw only one young man with
his pants sagging. The man made a lewd hand gesture when Williams asked
the youth to pull up his pants. But he reconsidered when his friends
informed him he was speaking with the mayor, Williams said.

“There
was only one person there testing me with his pants,” he said. “If you
went to an event in Chicago, you’d see it all over the place. So it does
work for us.”