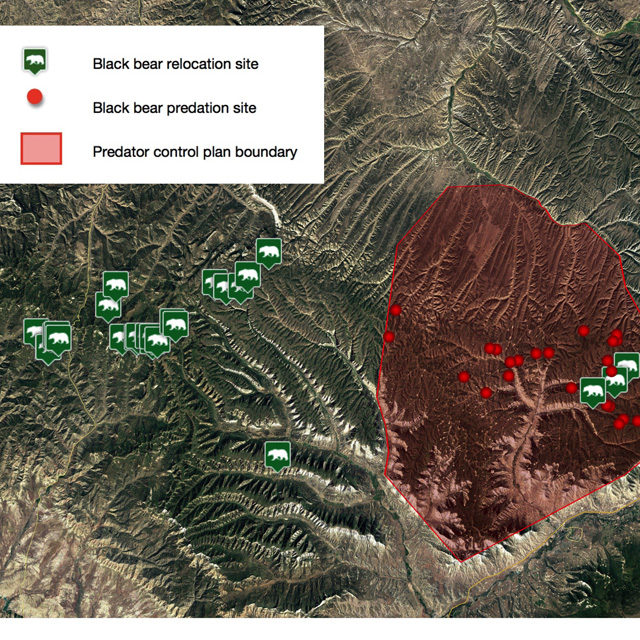 CPW claims the killing of these predators is necessary because the areas in question have seen increased predation on mule deer fawns. Despite its own research that has found oil and gas operations and habitat loss due to human encroachment are the primary drivers of declines in the mule deer population, CPW is presently killing, and plans to continue killing for the next three years, up to 25 black bears and 15 mountain lions per year from May to June in the Piceance.

The realization that black bears are being released into an area where black bears are slated to be killed raises important questions. First, is CPW killing the bears for a predation problem it has effectively authored byway of bear relocation? Or second, is CPW relocating bears from areas with higher human populations where there would surely be public backlash associated with their destruction only to kill them in a place with less press coverage and therefore, less public outrage?

The relocations were first confirmed to BW by Chuck Anderson, CPW Piceance Basin predator control plan principal investigator in a Jan. 9 interview. Anderson stated he had only recently learned of the relocations, indicating they may not have been accounted for in the predator control plan as it was approved by the CPW Commission or in the required environmental assessment prepared by Wildlife Services (WS). As much as 75 percent of the project’s cost is funded by grants approved by the U.S. Fish and Wildlife Service (USFWS) that relied on what now appears to be an insufficient environmental assessment that failed to consider the relocated bears’ impact on the area.

CPW and WS public information officials did not respond to BW’s attempts to contact them as of press time, and USFWS officials declined to comment citing pending litigation, which has been filed by two environmental groups attempting to stop the predator killings.

It’s difficult to say exactly how many black bears relocated to the Piceance Basin area have moved through the specific area marked for predator destruction, but BW has obtained documents from CPW through an open records request detailing the release of bears and mountain lions.

According to the documents, between 2012 and 2016 — the same relative time period CPW was monitoring black bear and mountain lion predation on fawns in the Piceance — CPW relocated 27 bears into the area. The documents show no mountain lions being relocated into the Basin.

Of the 27 bears relocated, nine were released in May and June, the very time of year when bears are coming out of hibernation and are most likely to feed on mule deer fawns due to the overall lack of forage. As part of the Piceance Basin predator control plan documents CPW provided in its proposal for federal funding, there appear to be 23 sites (see map above) within the area where bears are suspected of having killed mule deer fawns. When the bear relocation information is added to the map, it shows that the location of each fawn killed is clustered approximately within a 12-mile radius of where three separate bears were relocated in May, June and July.

The documents also show that 15 of these predation sites were within a 6.5 mile radius of where those same three bears were released, and nine were within two miles.

In addition to the nine bears CPW released in May and June, they also released five bears to the area in July, eight in August, three in September and two in October.

The 24 bears released outside of the predator control plan boundary were set loose in locations ranging from nine to 25 miles from the boundary’s western edge.

All 27 bear relocation sites are within 30 miles of CPW’s predator control plan area, and according to CPW, black bears have a range of 10 to 250 square miles, making all 27 black bears released in the Piceance Basin a possible suspect in feeding on mule deer fawns.

While it seems clear that these relocated bears may have impacted CPW’s mule deer monitoring during its study period, this relocation data was never specifically addressed in WS’ environmental assessment. It seems a significant omission considering the assessment is required under the National Environmental Policy Act (NEPA).

Further complicating the matter is the fact that much of the land where CPW chose to relocate the bears doesn’t appear to have suitable forage — something CPW seems to admit in a 2012 environmental assessment prepared for a land exchange with ExxonMobil. According to that assessment, the parcels CPW was exchanging with Shell were impacted by drought and increased energy development activities in the surrounding areas, and as a result, “now exhibit reduced wildlife habitat values and resultant smaller big game populations.”

And it’s not just researchers who have been questioning the CPW’s actions. Longtime resident and outdoorsman of the Piceance, Alan Dwire, has his concerns about the way CPW has handled the bear issue. In a recent interview, he recalled how CPW — then the Department of Wildlife (DOW) — was relocating bears to the same area in the late 1980s as well.

“I worked on what they call the Roan Cliffs,” Dwire says. “They [DOW/CPW] were dumping them problem bears up there, and it’s not really bear country. There’s not that much for a bear to eat, and they were just dumping bears. They were ear-tagged, and they just created a problem.

“It’s kind of ridiculous to dump bears into an area where there’s nothing for them to eat,” he says.

Dwire also notes that because there was nothing for these bears to eat, they’d end up in livestock conflicts, which usually resulted in their deaths.

It is also plausible the bears CPW relocated to the area, because of lack of forage, could have turned to killing, or at least scavenging on, mule deer fawns to survive where they might not have otherwise. And it’s also certain that any dead fawns in the area would be more easily located due to the lack of vegetative cover, another problem associated with the impacts of oil and gas development that may well have skewed the study’s findings.

As for now, CPW, USFWS and WS are not commenting. Yet, despite the fact that these agencies failed to study the impact of relocating bears on the mule deer populations in question, the snares are already in the field and Colorado’s mountain lions and bears are in the crosshairs.