When Diana Zuniga was a baby, her parents brought her to Salt Lake City, Utah. It’s where her aunts and uncles were living, in the shadow of the Wasatch Mountains, so it made sense to settle down in the bustling city and its robust economy. It’s where everyone could make better lives for themselves, secure better education, feel safer — at least compared to the prospects facing them in Guanajuato, Mexico.

Zuniga explains this and the emotional toll that comes with being a young undocumented person in the U.S. — the stress of waiting for some sort of immigration relief, the love she has for skiing and for her college classes, the fear she has about her unknown future — in Quiet Force, a film about the Latino immigrant workforce in U.S. ski towns.

“I love skiing because it brings me joy, it brings me happiness, it fills me with love.” Zuniga’s voice is layered over footage of her carving down a slope, woven between voices and stories of other folks much like her. “It’s a place where nothing else matters except for the next turn, and the next three after that.” 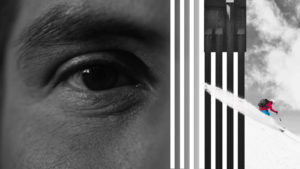 Unlike other ski films, which tend to blend clips of skiers slicing through pristine powdery slopes and helicopters criss-crossing bluebird skies, Quiet Force zooms away from the elite, predominantly white, usually male class of superstars. Instead, directors Hilary Byrne and Sophie Danison take their cameras behind the scenes of the ski industry, taking a critical look at the folks that keep ski resort towns running and the layered, complex issues they face — issues the vast majority of skiers don’t ever have to think about, like deportation or access to community resources.

“This was something that wasn’t being talked about at all,” Byrne says. At the time she and Danison were working on the film, they were both based in Jackson Hole, Wyoming. “In fact, a lot of people around had no idea that 30 percent of the population here was Latino.”

In Colorado, the demographics of ski resort counties are no different. Eagle County, where folks within Vail Resorts’ infrastructure live, eat and go to school, is currently 29.7 percent Latino. Garfield County, serving the Aspen area, registers nearly as many: 28.6 percent. Both counties host a higher concentration than the rest of Colorado; statewide, 21.5 percent of registered residents are Latino.

As one woman in Quiet Force says, without a Latino workforce in ski towns, “The whole infrastructure would fall apart.”

Noah Novogrodsky, professor of law and ethics at the University of Wyoming adds, “There are costs associated with an undocumented immigrant population, needing bilingual city or town employees, not being able to predict the kinds of educational and medical services that are needed, but they are far, far outweighed by the need and economic driver that is a diverse immigrant community.”

It wasn’t something Byrne nor Danison necessarily realized, either, until they read David Page’s 2015 article in Powder Magazine, “The Quiet Force.” Page details not only the critical roles that migrants play in the inner workings of ski resorts — from staffing cash registers to carpentry jobs, from cleaning hotel rooms to cooking in town and on the mountain — but he also highlights the value of the connection to the outdoors these folks forged since their arrival.

At the turn of the century, Page notes, migrants started bypassing traditional urban destinations. More than 60 percent of the folks that arrived in the U.S. between 2000 and 2010 “instead landed in far-flung suburbs or smaller rural communities.” These are areas like Wyoming’s Jackson, California’s Mammoth Lakes and Colorado’s Vail — “places that Cornell University sociologist Daniel Lichter calls ‘Hispanic boomtowns,’” according to Page, “where there’s not only the promise of work to be had, but also relatively decent and safe living conditions.”

Byrne and Danison visited Jackson, Mammoth, Vail and other ski hubs in the U.S. while researching and filming Quiet Force. Having both been involved in ski media for years, the duo was ready to dig below the powdery fluff of typical ski films. Then the 2016 election happened, Byrne says, and with Page’s article fresh on their minds coupled with the new administration’s anti-immigrant rhetoric and policy, “We were like, ‘OK, let’s really make this happen.”

Quickly, however, “We realized this is a much deeper story about immigration policy,” Danison says. “And without going down that road, you’re left with a sense of, ‘Oh. So this is what’s happening. But what does this all mean? How does it connect to the big picture?’”

So they decided to go down that road. They traveled to the border, interviewing migrants and support groups along the way. “Everything was changing and things were heating up as we were doing this,” Byrne says. As they continued developing the film over the next two years, “there was that urgency to dive deeper as well as understand more.”

As they prepared to show the film, they extended that ethos, making Quiet Force’s film screenings about more than just watching the film. After each showing they hold panel discussions with local experts and nonprofit representatives. At the Breckenridge and Silverthorne showings (in English, with Spanish subtitles), the immigration rights’ organization Mountain Dreamers will host the panel discussion.

“Then people can at least ask the questions they want to ask, and have a way for direct action after the film. At the bare minimum, they become a part of the conversation,” Danison says.

Byrne adds: “Rather than saying this is a film that starts a conversation, we’re actually creating a space for the conversation to happen.”