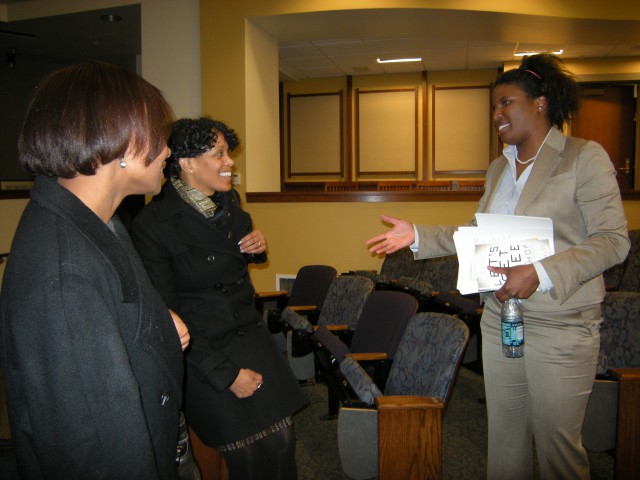 For a while now, we’ve known that black men are more likely to end up in prison than white men. Why isn’t this changing?

Whether you’re a serial killer or as pure as a poster child for the Scouts, nothing counts as much as your race when it comes to encounters with police and the criminal justice system in the United States.

It’s even true for Colorado, a state with a population close to 90 percent non-Hispanic white.

As a result, a disproportionate number of African-Americans, particularly men, wind up spending more time in prison — and are more likely to wind up on death row — than their white and Latino counterparts charged with similar offenses.

This is based on evidence provided by data from U.S. departments of corrections, the U.S. Department of Justice, and public-policy research organizations such as the Justice Policy Institute, and it was reiterated on Feb. 19 by the speakers at a conference in Boulder spearheaded by a law student troubled by the lack of attention given to this subject in general.

“It was in the spring of ’08 that I heard about this, about four months after the Supreme Court ruled on the drug sentencing law as it pertains to selling cocaine,” says Jennifer Ford, who is due to graduate in early May. “I thought, ‘This deserves more than one day in my criminal justice class.’”

Encouraged by Ann England, associate clinical professor of law at CU, Ford worked with Colorado law student groups and the Sam Cary Bar Association to produce an all-day conference at the CU School of Law that brought together representatives of academia, social services, citizens’ action groups and the criminal justice system.

The result was an unprecedented event for its kind at CU, as far as Ford or England say they know, but more importantly, it may have helped to highlight ongoing efforts to curb racial disparities in sentencing.

As of 2008, the latest census data, Colorado had a population of 4,939,456, 89.7 percent of which is non-Hispanic whites, compared to 20.2 percent Hispanic and 4.3 percent African-American — the two largest ethnic minority groups.

According to the Colorado Department of Corrections, the total prison population as of Dec. 31, 2009, was 22,661 — 20,523 males and 2,138 females. (This includes nine privately run prisons that Colorado contracts with, as well as the 23 staterun facilities.)

The reasons for racial disparity aren’t always based on overt racism in the criminal justice system, or the implied higher criminality within racial minority communities, according to law enforcement insiders and analysts at the Boulder conference.

“Racial disparity is on all levels,” says Christie Donner, executive director and founder of the Colorado Criminal Justice Reform Coalition based in Denver. “And it starts with more blacks and Hispanics being stopped and detained for questioning than white people, regardless of where they happen to be. Let’s face it; this isn’t happening in white suburbia, even though we know there are more white people committing crimes.”

Not so fast, says Dr. Tracie Keesee, a black woman who rose through the ranks to become division chief for research, training and technology for the Denver Police Department.

“We hear from people in these communities where the stops are happening that this is working, that it’s making a difference in reducing the amount of crime in their neighborhoods. So who do we listen to? In the end, it really should be about making sure everyone understands the law and why it is being applied. And making sure that, for whatever the reason, you are applying the law equitably.”

“Where there is discretion to be exercised by judges and parole departments, we are not seeing it [equity],” Donner says. For instance, she says, “harsher penalties are generally given to blacks and Hispanics for the same [drug] offenses committed by whites. And there is more mitigation of sentences in favor of whites.”

Where there is little leeway in sentencing, mandatory guidelines may offer their own form of unequal justice.

The court’s decision in that case granted judges greater discretionary power in sentencing dealers who sell cocaine — but it wasn’t retroactive for those already in prison.

Drug offenses, a category that includes simple possession of illegal drugs, are responsible for the greatest number of incarcerations and are blamed for the explosion in prison population growth over the years. Again, African-Americans in Colorado are far more likely to be sentenced for these offenses than their white counterparts, despite federal studies that show that, number-wise, whites account for most of the drug abuse.

Proponents for change in Colorado have proposed legislation, considering the changes to be much-needed reform in the past. But opponents say the changes are bureaucratic meddling that will only assist criminality.

For example, the governor-appointed Commission on Criminal and Juvenile Justice was formed in 2007 to study Colorado’s criminal sentencing and advise legislators on how to deal with the skyrocketing costs of ever-expanding incarceration.

But when its recommendations resulted in a bill last year that would have reduced penalties for nonviolent crimes, particularly first-offense drug crimes, and given judges more alternatives to incarceration, state prosecutors quickly opposed it, and it was defeated.

Reformers tried again this year. House Bill 1201, sponsored by Rep. Karen Middleton, D-Aurora, (and in the Senate by Sen. Pat Steadman, D-Denver), was approved by Colorado’s House Judiciary Committee on Feb. 22, and is currently slated for a second reading and preliminary vote on the House floor.

It addresses one of the perennial complaints of minority communities — the police stop of a person, whether in a car or as a pedestrian, without probable cause. It was written with the input of law enforcement.

The bill would require police when requesting a search, without probable cause, of a person’s body or car to read a statement informing that person of his/ her right to refuse that search, and to get written consent for such searches.

Among the opponents of the bill is the Colorado District Attorneys’ Council, a private trade group that represents 20 out of Colorado’s 22 district attorneys.

Executive Director Ted C. Tow says the group’s position is that the bill overreaches, taking a problem he says is “more of concern to Denver” than the rest of Colorado and “going beyond what even the U.S. Supreme Court has ruled regarding the subject.”

“The bill is about
keeping criminals from being prosecuted,” he said in a phone interview.
“It won’t stop racial profiling, if that’s what proponents are hoping
for. It’ll just scare police officers from pursuing a search if they
think it’s necessary. It won’t stop people from claiming they gave
written consent under duress, or protect any evidence lost if a police
officer forgets to have a piece of paper signed. It will create
confusion and an extra hoop for police officers to have to jump
through.”

At the
Colorado’s House Judiciary Committee hearings, advocates of the bill
said it was about putting balance in an area where the police have
complete discretion to ask for a search without any probable cause, let
alone a reasonable suspicion.

“There
have been other states and jurisdictions that have chosen to regulate
consent-searches,” said Mark Silverstein, legal director of the
American Civil Liberties Union of Colorado, who at the hearing singled
out New Jersey, Rhode Island and Minnesota as examples. “And the sky
has not fallen in.”

Middleton said she proposed the bill at the request of her constituents.

“My main
focus is usually education,” Middleton said at a recent town hall
meeting in Aurora. “This is a bill that I brought because this is what
my constituents asked for. It’s clear from what my constituents were
saying that there’s a lot of confusion around ‘consent searches’ under
current law.Individuals are often unaware of their right to choose.”

Middleton
later said in a statement, “The intent of the bill is to provide
consistency and a transparency to consent-search proceedings. It merely
clarifies an existing right, and I believe provides a new tool to law
enforcement to enhance trust within our local communities.”

Art Way of the Denver-based Colorado Progressive Coalition, who also testified at the hearing, agreed.

“Even
in communities that have asked for more policing. This causes so much
resentment that it understandably builds up distrust of the police and
a resistance to cooperating.”

“Ideally,
this bill will help deal with a lot of underlying problems to racial
disparities by reaffirming everyone’s Fourth Amendment rights,” he said
during a recent interview. “If we can improve the respectful
interaction between police and the community, we can improve safety
generally.”

When it finally came to the last panel of the Boulder conference, titled “Solutions: A New Way Forward,” one question
from an audience member, businessman and attorney Michael Belochi,
summed it up: “Is anyone in the country getting it right?”

When law-enforcement
agencies are willing to accept and work with the research-based
evidence of what works and what doesn’t, yes, was the answer. Law
enforcement practices and laws may be amended, civilian cooperation
improved, incarceration rates declined. But change is coming slowly,
and disproportionate racial percentages remains despite declines in
overall prison populations since 2007.

“I’ve seen many changes in my 21 years of service,” Keesee says. “But more by incremental steps than big moves.”

“We
need to bring the power of research-based evidence to life and motivate
people to think about what needs to change,” says Dr. Jennifer
Eberhardt, an assistant professor of psychology at Stanford University.

Eberhardt’s
focus is on racial stereotyping, prejudice and stigma, and the effects
they can have even among people who consider themselves free of racism,
whatever their own race.

Bringing
in research-based evidence, she said, to address the persistence of
false perceptions even among well-intentioned people is a more neutral
and effective tactic to recognize assumptions that influence actions.

That
requires intervention, introducing more positive interaction in the
troubled relationship between law enforcement and community.

“People
are just distant from one another,” Eberhardt says. “They don’t have
empathy for one another. Once you can bring them together, share their
experiences, you can start to break that down.”

Keesee
agreed. “Just speaking for Denver, we have to keep working on our
training, on raising awareness and constantly assessing what’s going
on. But it’s hard to assess if there is so much distrust of the police
that people aren’t willing to come forward and report problems. The
racial disparities of the criminal justice system have to be addressed
by the whole system — the police, the lawyers, the judges, the parole
board. There isn’t enough conversation going on at the levels where
greater change needs to happen.”

Keesee says that for many people, it’s an overwhelming subject that they would prefer to avoid.

But
for budding lawyers such as CU student Jennifer Ford at the conclusion
of the Boulder conference, the conversations are just beginning.

Said Ford: “I wish we could have this every year.”