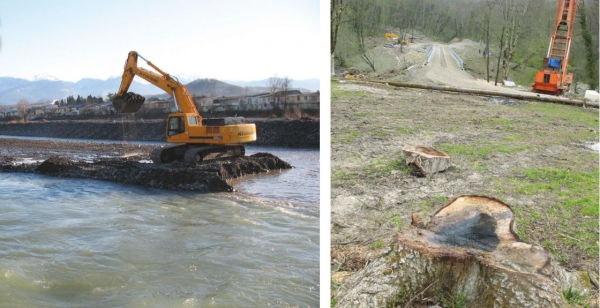 The Russian government has reportedly frozen the assets of an environmental group funded by a Boulder nonprofit because the group has been critical of ecological damage done by construction of Olympic facilities in Sochi.

Boulder-based Global Greengrants, which over the past two decades has provided nearly $40 million in small grants for environmental efforts in 140 different countries, sent a $4,000 award to the Russian organization Environmental Watch on North Caucasus (EWNC) in 2011, as the sole funder of the group’s study on the impact of the new structures built for the Sochi Olympics.

The study declared that the 2014 Winter Olympic Games are the most environmentally destructive ever.

Now, according to representatives from both organizations, Russian officials have seized EWNC’s bank accounts and jailed the group’s geologist, Evgeny Vitishko, on trumped-up charges that have earned him three years in a penal colony.

Another EWNC leader, Suren Gazaryan, who also faced criminal charges he believes were intended to quell his environmental activism, fled the country in summer 2012 because he faced imprisonment. He is in exile in Estonia, which offered him asylum.

In an exclusive interview from Estonia via Skype, on the eve of the Feb. 12 release of his group’s controversial Sochi report, Gazaryan told Boulder Weekly about his experiences with Russian officials and their efforts to quash environmentalists critical of the government.

Gazaryan says EWNC has been harassed by the administration of Russian President Vladimir Putin before, like when the group opposed an “illegal sei zure” of forest and coastal lands along the Black Sea, but it seems that the group’s work at the site of the Olympics was the last straw.

“There wasn’t [such] huge harassment for us before the Olympics,” he says, adding that the intimidating desist letters and minor administrative charges suddenly escalated into criminal charges. “They tried to stop our report, to prevent our work.”

Gazaryan was with now-jailed Vitishko when the two were detained on charges related to damaging what Gazaryan calls “an illegal fence” erected in a public forest (Vitishko’s appeal was denied this week, the same day the EWNC report was released. According to media reports, in 2011 the two were accused of causing $4,000 of damage to the corrugated metal fence, which had been placed around the governor of the region where Sochi is located.)

EWNC and Greengrants say the area used for the Olympic village in Sochi was a protected national park.

“This was what, in the U.S., we might consider a wilderness area,” Greengrants Executive Director Terry Odendahl says of the Olympics site. “It had no roads going through it.”

Greengrants claims that to make way for the Olympic village, the Russians razed old-growth forests and rich montane meadows, and converted the Mzymta River into a walled-in, polluted trickle that threatened downstream water users.

Suren Garazayan told BW about the events that led to his exile
from Russia.

According to Gazaryan, “10 square miles are completely destroyed because of this construction,” and the Russian government was able to sidestep the nation’s highest level of protection afforded to wilderness areas by passing a law in 2006 that allowed construction of recreational facilities, roads, hotels and other amenities in the country’s national parks. “It’s impossible to describe the damage done to the environment.”

After the fence incident — in which Gazaryan says he simply folded one section of the barrier down, to cross it, and others spray-painted words — Vitishko received the three-year sentence because he was on probation and failed to show up for a designated check-in. Gazaryan says he fled the country after an additional charge was levied, involving a death threat against Putin’s guards. He says he was wrongly accused of throwing a stone at the guards, and faced three and a half years in jail. The incident occurred in Gelendzhik, a famous Russian resort town, at what Gazaryan refers to as “Putin’s Palace,” which he says was constructed in another ecologically destructive move, without an environmental impact assessment, proper licensure for tree removal or public hearings.

According to Gazaryan, EWNC had already spent a portion of the $4,000 it received from Greengrants, but the Russian government froze the remainder — and the rest of EWNC’s assets — on the basis of a relatively new law designating environmental groups as “foreign agents” if they receive money from other countries. Odendahl explains that the legislation, approved in the past year, requires such groups to register if they receive foreign money, and EWNC didn’t declare the contribution because it had been awarded prior to the passage of the law. The new regulations treat such groups “like spies because they took non- Russian money,” she says.

Odendahl adds that government officials discovered the foreign contribution in March 2013, when they visited the EWNC office as part of the Russian version of an audit, and saw the award letter.

She adds that this kind of law is not unique to Russia. India and other countries are adopting similar rules to dissuade philanthropic funds from being donated by foreign nations, and in India a female journalist who received Greengrants money was jailed after she began documenting corporate takeovers of indigenous lands.

“Unfortunately, it happens all the time, the worldwide criminalization of activists,” Odendahl says.

Gazaryan and Vitishko are not the only members of the group to be targeted by their government. According to media reports, there have been at least six detentions of EWNC members over the past four months.

And EWNC founder Andrey Rudomakha, who remains in Russia, is out on bail after sending a text containing “some impolite words about a judge” and was charged with offending the judicial official, according to Gazaryan. In one of their earliest conflicts with the Russian government, Rudomakha and Gazaryan had tried to stop the cutting of a protected tree species in 2009, but only faced minor administrative charges as a result of that standoff, Gazaryan says.

He adds that while in exile he has remained in touch with his colleagues, and it proved difficult to release the EWNC report this week because of the jailing of geologist Vitishko, who was the key player in documenting the geologic impact of the Olympic construction in Sochi.

“We are trying to survive, somehow,” Gazaryan says, adding that the intimidation of environmental groups “is not exceptional in Russia.” Many cases of such harassment have been reported across the country, he explains, and the situation exemplifies “the decline of democracy, the decline of human rights and pressure on civil rights.”

Odendahl says the grant that her organization made to EWNC, which was the first it had received, is not unusual. Greengrants, which is celebrating its 20th anniversary this year, has issued similar awards for studies on the environmental impacts of the Olympic Games at Beijing and Vancouver, as well as the World Cup in Brazil.

She says her group’s annual budget for grants in Russia is less than $200,000, and the Greengrants advisory board elected to issue awards of $4,000 — less than the organization’s average of about $5,000 — in an effort to reach more initiatives. Greengrants was founded on the principle that “the environment doesn’t know boundaries or state lines,” Odendahl explains, and since the majority of environmental activism was being funded in the United States, there was a need to invest in similar efforts in developing countries.

She says that while Greengrants recipients have been persecuted in the past, this reaction is unprecedented.

“We really want to get the word out in other countries, because getting the word out can help protect the activists,” Odendahl says, adding that it’s not like EWNC was engaging in confrontational actions. “They’re not holding signs and protesting at the Olympics. They’re publishing a scientific report.”

When asked whether he thinks he will ever return to Russia, Gazaryan replies, “I don’t know yet. It depends on how long Putin is still alive. I’m not sure the situation will change before he dies, unfortunately.

“He won’t go away, himself, and I don’t think the people will overthrow him.”