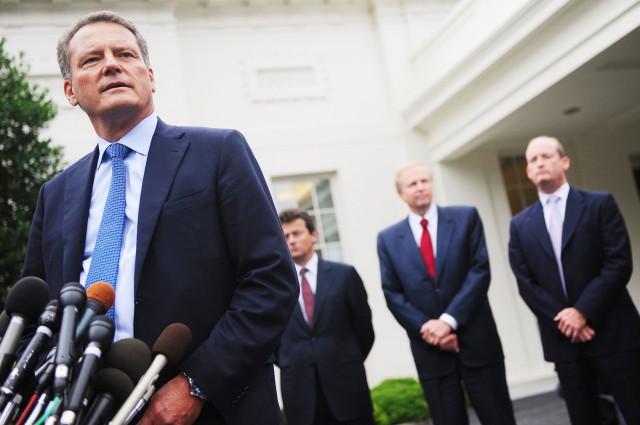 — The Obama administration has reached a preliminary agreement with BP executives that would see the oil company pay over several years into an independently controlled escrow account to be established to compensate
residents affected by the disastrous oil spill, and BP’s board of
directors has eliminated the company’s stock dividend, at least
temporarily.

The agreement on the escrow was negotiated in a meeting at the on Wednesday morning, the first face-to-face gathering between President and senior BP leadership. A official said that, under the terms of the deal, the fund would be administered by attorney ,
currently serving as the special master for executive pay under the
Troubled Asset Relief Program. Feinberg ran a fund that compensated
victims of the terrorist attacks of .

Immediately after the meeting, BP Chairman said the oil company’s board of directors has decided not to pay any more dividends this year.

BP has been under intense pressure from the Obama administration to cut or eliminate the it distributes annually to shareholders. Svanberg, speaking to reporters outside the , didn’t say how long the dividend would be suspended.

The meeting comes 57 days after the explosion at BP’s Deepwater Horizon oil rig. Prior to Wednesday, Obama had yet to speak with . Half a dozen other BP executives joined a phalanx of Cabinet and senior administration officials in the meeting in the . It was not yet known how long the president remained at the meeting. Obama was scheduled to address reporters in the on Wednesday afternoon.

Wednesday’s session was the final piece in a
choreographed three-day series of events intended to showcase Obama’s
handling of the gulf oil crisis. He made his fourth visit to the gulf
region, with stops Monday in and and Tuesday in . After returning to ,
he delivered his first address to the nation from the Oval Office,
outlining what he called a “battle plan” for cleaning up the spill,
providing assistance for those affected and, ultimately, to “make sure
that a catastrophe like this never happens again.”

BP executives were in
for several congressional committee hearings on the oil spill. Hayward
is scheduled to testify Thursday morning at a House Energy and Commerce
subcommittee hearing specifically on the role of BP in the spill.