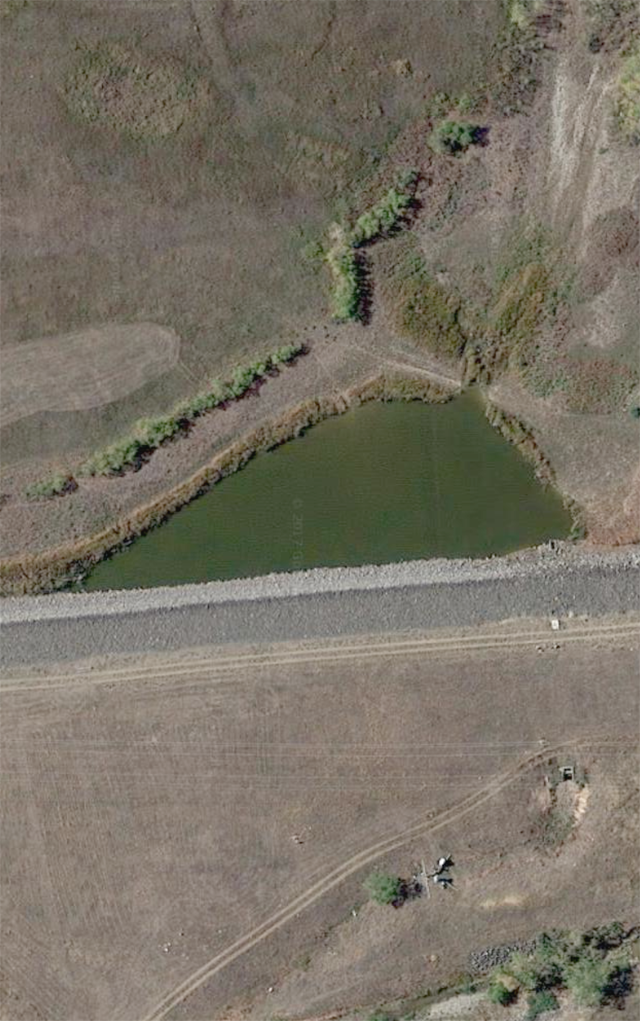 The City of Broomfield and the Woman Creek Reservoir Authority (WCRA), a political subdivision and public corporation of the State of Colorado, are opposed to a U.S. Department of Energy (DOE) plan to breach a dam on a pond collecting surface water flowing from Rocky Flats, the former nuclear weapons facility site 10 miles south of Boulder.

DOE has contended that the dam on Pond C-2 is “no longer necessary to site operations” and wants to remove it sometime between 2018-2020 to return surface water flow to Woman Creek, thereby enhancing streamside wildlife habitat and encouraging wetlands. Removal would cause “no significant impact,” as determined by an environmental assessment conducted under the National Environmental Policy Act (NEPA).

Getting rid of the dam would also cut DOE costs related to inspection, reporting and upkeep, which WCRA estimates to be around $17,000 per year.

Yet according to a 2016 document prepared for WCRA by Boulder-based Hydros Consulting Inc., removal of the dam would “represent an irreversible loss of an effective contingency to protect downstream water quality” in Standley Lake, the drinking water supply for Westminster, Northglenn and Thornton, also used for irrigation, fishing, boating and water skiing.

Alan King, director of public works for the City and County of Broomfield, wrote in his June 2010 correspondence with DOE that the breach would “clearly increase the potential for uncontrolled releases of contaminated surface water off-site that would negatively impact downstream watersheds and expose downstream communities to additional risks.”

Pond C-2 is located on the border of the former Rocky Flats facility site 1.25 miles upstream of the Woman Creek Reservoir, the latter of which was built in 1996 to capture Rocky Flats runoff and keep it from reaching Standley Lake. The pond is currently operated in “batch-and-release mode,” where it is allowed to fill to roughly half capacity, and then discharged up to two times per year, according to DOE’s Environmental Assessment.

The 903Pad is an area of Rocky Flats where more than 5,000 buried barrels of liquid radioactive waste leaked, contaminating an estimated 261,000 square feet of soil before they were removed, according to the Colorado Department of Public Health and Environment (CDPHE).

GS51 is a surface water sampling location within the former facility site just south of the 903Pad and upstream of a ditch which DOE says flows “quite infrequently” into Pond C-2. On October 4, 2013, a month after the flood of 2013, GS51 “recorded elevated levels of plutonium in excess of the applicable standard,” according to a September 2015 memo from the Town of Superior Trustees to the Rocky Flats Stewardship Council.

King noted that Pond C-2 also receives runoff from several other areas that have “residual contamination.”

“Elevated readings for uranium have been recorded in this pond, and DOE-LM acknowledges that it is not 100 percent natural uranium,” wrote King.

On April 4, 2016, water samples collected on Woman Creek reached 0.313pCi/L (picocuries per liter) for plutonium and 0.17pCi/L for americium, “the first sample over 0.15pCi/L in more than 20 years of sampling…” according to Hydros Consulting.

Surface water samples “indicate that solids transported in runoff … have, at times, been above the Site closure cleanup target for surface soils” of 50pCi/g (picocuries per gram), occurring “in four out of five of the most recent years,” mostly attributed to plutonium.

Typical events aside, the City of Broomfield and WCRA fear that a wildfire or landslide in contaminated areas within Rocky Flats may result in further downstream contamination.

According to Hydros Consulting, removal of the dam will “eliminate the option to utilize the demonstrated [plutonium, americium and uranium] removal mechanisms of the ponds in the event of significant unanticipated upstream mobilization.”

In 2014, the U.S. Fish and Wildlife Service, which oversees the Rocky Flats National Wildlife Refuge — 4,000 acres of grassland prairie surrounding the former facility site — proposed a prescribed burn to control weeds and reduce vegetation. Yet the proposal was canceled following opposition from local governments and concerned citizens.

Fire return intervals for this type of grassland range from 10-35 years, and a lack of fire and grazing has built up fuel levels that may create more intense fires, according to the Department of Energy’s 2013 Wildland Fire Management Plan for the Rocky Flats, Colorado Site.

Some of these higher fuel levels are within the former facility site containing the highest levels of contamination, though DOE found that much of the area “consists of reclaimed grassland areas that often still have sparse vegetation that would probably not carry a fire.”

Erosion in grasslands “increases dramatically” by 350 to 500 percent after a fire, according to a 2011 study from the University of Arizona. However, a 2001 study out of Colorado State University found only “small increases” in erosion after grassland wildfires, attributed to the fact that such low-intensity fires usually burn out rapidly.

Hydros Consulting listed 11 wildfires at Rocky Flats since 1993. Further, Hydros pointed out that the uptick of visitors expected after the 2018 opening of the Refuge and proposed connection to the Rocky Mountain Greenway is likely to increase the risk of accidental fire.

In terms of erosion, “soil movement and slumping occur regularly at the Site, generally on a relatively small scale but occasionally on a larger scale.” Hydros also noted “major hillside failures/rotational slumping events” at a landfill that DOE has documented contains depleted uranium.

WCRA’s main concern is contaminated runoff flowing into Standley Lake. However, Standley Lake is already contaminated with “low but measurable concentrations of contamination from 5-10 inches deep in the sediments” in the form of plutonium, due to contaminated wastewater released from Rocky Flats operations into Woman Creek, according to the CDPHE.

A 2014 memo from Hydros Consulting to the City of Westminster noted that core sampling of Standley Lake sediment found a maximum concentration of plutonium of 0.61 pCi/g (picocuries per gram) in 1983 and 1984.

Still, CDPHE explained that the water is safe for drinking since “most of the plutonium from Rocky Flats was in a form that does not readily dissolve in water.”

A joint statement from the Cities of Westminster, Thornton and Northglenn says the municipalities have been “monitoring Standley Lake for radioactivity since 1988, and all sample results have met drinking water standards.”

Whether a potential release of contaminated runoff from Rocky Flats following the breach of the Pond C-2 dam would increase those levels is uncertain. However, WCRA and the City of Broomfield urge the DOE to err on the side of caution.