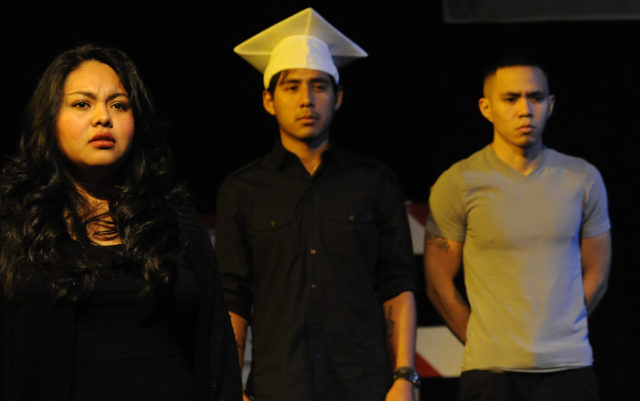 It seemed like an ordinary morning. Ana was sitting in the passenger seat typing her final paper while her husband Victor drove her to school. All of a sudden, their bodies lurched forward and back; they had just been rear-ended. However, the panic that ensued wasn’t from the accident but from the encounter Victor, an undocumented immigrant, had with the police who came to investigate.

“Am I about to see my husband get taken away from me?” Ana thought. “Why is it that my husband is now getting the heat from the police when it should be the reckless driver that almost cost us our lives? Why? Why? Why?”

Ana Christina Temu’s story is one of the five original monologues from Do You Know Who I Am?, a 2013 award-winning play directed and scripted by Motus Theater Director Kirsten Wilson voicing the personal narratives of undocumented immigrants. Now, law enforcement leaders of Boulder County have been invited to join the conversation by reading the monologues in the upcoming performance titled Law Enforcement Leaders Read Do You Know Who I Am?

The one-time performance will take place on Sunday, April 30 at The Dairy Arts Center and is meant to build more trust between law enforcement and the community, primarily those who are not legally authorized to be in the U.S.

“I think we’re taking a huge leap of faith and we’re really trusting that law enforcement will understand and will get what people are going through,” Temu says. “We’re hoping that it will pass on to how they enforce and serve our community.”

Since its premiere, more than 4,500 people have seen the original show, allowing those who may be unfamiliar with the struggles of undocumented immigrants to witness the daily fears that haunt them. The updated performance will also bring in Ana Casas’s monologue, which was originally scripted and co-produced with Motus Theater by Programa Compañeras of El Centro de Amistad for the performance Salsa Lotéria.

Wilson strategically paired up each monologue based on the context of the story and the position of the law enforcement reader. For instance, Boulder District Attorney Stan Garnett will read Casas’s monologue about her younger brother’s painful deportation. The story of Casas’s brother, Luis Alberto, sheds light on the inhumane treatment people receive during the process of deportation. As an 18-year-old young man, Luis Alberto spent six months in jail and was then thrown into one of the most dangerous cities in Mexico.

“For a district attorney to talk about the injustice of deportation is a very powerful thing,” Wilson says. “To get up there, speaking Ana Casas’s story and asking, ‘Is this justice?’”

“We lead by example,” Chief Bashor, who will read Hugo Juarez’s monologue, says. “What we say is what we mean and that dialogue just needs to continue on so that people can ask questions, get to know us and we can get to know them.”

In hopes of reaching law enforcement leaders in communities outside of Boulder County, KGNU radio will broadcast the performance live and then once again on May 4.

“Communicating and building trust with the immigrant community has always been a top priority in mind, particularly since the election,” Garnett says. “The performance seemed like a fairly creative way to continue to carry the message we’ve been carrying, which is that state law enforcement in our community has no responsibility for immigration issues and we’re interested in protecting everyone.”

While the City of Boulder recently claimed the official title of a “sanctuary city,” there is still much confusion about what law enforcement can or cannot do. Sanctuary cities cannot stop Immigration and Customs Enforcement (ICE) from making arrests but they are safe zones wherein local law enforcement is not required to enforce federal immigration law.

Performers and brothers Oscar, Juan and Hugo Juarez recognize Boulder County Sheriff Joe Pelle’s efforts to build a foundation of trust between the sheriff’s association and the undocumented community. To them, Pelle’s partnership with the Colorado Immigrant Rights Coalition (CIRC) demonstrates his commitment to honoring local policies and prioritizing safety.

“I can talk all day but it’s my actions that matter,” Pelle says.

He is scheduled to read Juan Juarez’s monologue about the various barriers the young man faced pursuing his dream of attending college.

“It’s an honor to read his story,” Pelle says. “He has told me his story before, so when I saw the monologue it was familiar to me, and I’m happy to recite it on his behalf.”

Hugo, Juan and Oscar Juarez’s narratives talk about their experience growing up undocumented in Arizona with a deep-seated mistrust of law enforcement officers, especially as anti-immigration legislation passed, such as the infamous “Show me your papers” law, among others.

Such laws influenced the Juarez family to move to Colorado, only to find that there were similar immigration policies here, too. (Although the 2006 law requiring local law officials to report anyone suspected of being undocumented to ICE was repealed in 2013.)

Rather than continue running from policies that increase the risk of deportation, the Juarez brothers got involved with CIRC and Northern Colorado Dreamers United (NCDU) to fight for the rights of undocumented immigrants and create a platform for their stories to be told, including Do You Know Who I Am?

“We’re just planting the seed so that it grows out of the performance for people to take action,” Oscar Juarez says. “We could make a federal impact as [long] as we continue doing this work on a broader level.”

All three brothers are now recipients of the federal Deferred Action for Childhood Arrivals (DACA) program and attend Metropolitan State University. Instituted in 2012, DACA has allowed 750,000 undocumented youth who came to the United States before their 16th birthday to obtain permission to work, hold a valid drivers license and to be shielded from deportation.

But the uncertainty of the program under the Trump administration is causing anxiety for both the Juarez brothers and the entire community. While concerns over losing these rights are vast, the primary fear is what the federal government will do with the information of DACA recipients if the program is revoked.

“If immigration were to come pick me up, not only would they take me, they would also take my parents,” Oscar Juarez says. “It’s millions of peoples’ lives that are at stake and it’s frightening… What happens in D.C., that’s a whole different world, but we want to make the local fight, we want to make sure that all of our local and elected officials put [forward] the example for everybody. To make sure that we continue to build trust and that they hold their word for what they tell the community.”

Rather than overwhelming audiences with statistics and laws, these performances, both in their original form and read by law enforcement, highlight the obstacles undocumented youth have to overcome to pursue their dreams of going to college and supporting their families.

“Our team has worked so hard at getting to the heart of what it is to be not just undocumented but human,” performer Victor Galvan says. “Talking about our hopes and dreams, talking about our challenges and moving forward… If people can connect on that level I think the conversation is already on a better foot.”

Galvan tells his story of growing up undocumented in Denver and having to get up at 3 a.m. to help his mom sell burritos. His determination to go to college was greater than the barriers preventing him from doing so. He knew his involvement with the community mattered, so he partnered up with Padres y Jovénes Unidos — an organization working for racial justice, educational equity and immigrant rights.

Galvan’s efforts were recognized when he won the Mayor and Commissioner Youth Award for Overcoming Adversity, which granted him one free year at the Community College of Denver.

Narratives reflecting the experiences of youth like Galvan, Temu, Casas and the Juarez brothers are meant to defy the notion that undocumented immigrants are “criminals.” When law enforcement leaders begin to understand the undocumented community as individuals with hopes and dreams, a foundation of trust is built.

“Folks who are living in fear based merely on their existence need all of the voices they can muster to stand up for them and say, ‘You belong to us and you’re part of us,’” Butler says. “We want them to feel like this place is safe for their voice to be heard, for their thoughts to matter and most importantly for their humanness to be valued.”