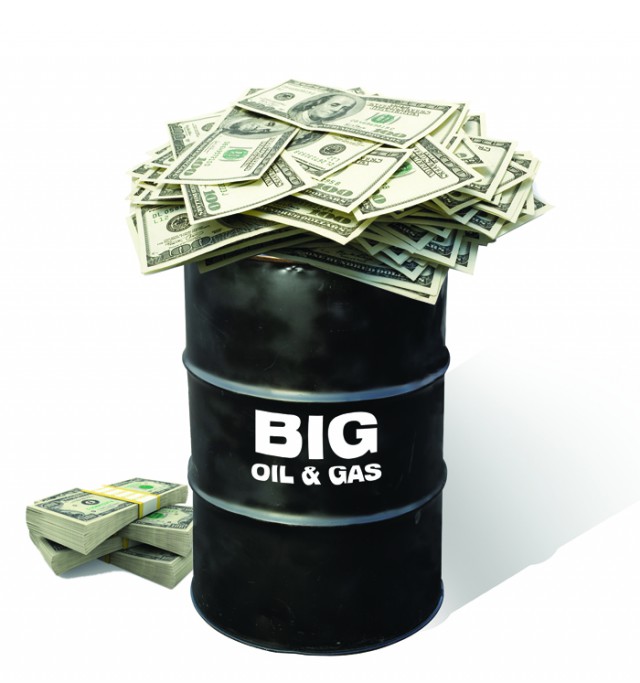 Though the election is six months away, the oil and gas industry is already plunging millions of dollars into campaigns to quash proposals seeking to give local governments the power to limit or ban fracking. Though those proposals are still forming, scores of ads from energy industry groups with green-sounding names will join those already on air and in print between now and Election Day, a Boulder Weekly analysis of elections records finds.

One political issue committee, Protecting Colorado’s Environment, Economy and Energy, accepted $2.1 million in seed money from seven industry companies in recent weeks, including oil and gas goliaths Noble Energy Inc. and Anadarko Petroleum Corp. Each provided $500,000 as of April 30, according to filings with the Colorado Secretary of State.

Catherine Collentine, Colorado campaign representative for the Sierra Club’s Keep Dirty Fuels in the Ground Initiative, says the millions of dollars that oil and gas developers are already spending to sway voters “make the eyes widen.”

“I think it certainly means that they have a vested interest in continuing to expand their operations here in the state of Colorado,” Collentine says. “While that’s not a surprise to anybody, it also means there’s a lot of misinformation or bias that will be presented as they move forward. At the end of the day, no matter what the claims are of hoping to educate folks on the facts about fracking, ultimately they are running a business and they have a financial stake in the outcome.”

Protecting Colorado’s Environment, Economy and Energy is already scheduling ads for television, contracting, for instance, with KMGH-Channel 7 to air more than $360,000 worth of ads this summer and another $519,000 worth of ads in September, October and November, according to filings with the Federal Communications Commission (FCC). At least one other station is poised to air ads by the group — KDVR-Channel 31, which received a “Record of Request for Broadcast Time” from the committee.

Karen Crummy, a spokeswoman for Protecting Colorado’s Environment, Economy and Energy, declined to estimate how much the committee will ultimately invest in ads and its broader campaign in the coming months. She did say the group is serious about its efforts.

“Obviously we’ll do what we have to to get the word out on the impact this would have on the state,” Crummy says.

Noble and Anadarko are also behind another group, a nonprofit called Coloradans for Responsible Energy Development, or CRED, with a “core mission” to “deliver solid facts directly to the people who need it most: you. As industry leaders, Anadarko and Noble are among the most technically qualified to explain the practice of hydraulic fracturing to Coloradans.”

Critics of the industry’s efforts estimate that CRED has already spent between $2.4 and $4 million on profracking advertising so far this year and the biggest spending months won’t hit until fall.

This year, the group is paying for an advertising supplement section in The Denver Post called “Energy and Environment” that mimics the appearance of objective news. The section includes articles with headlines such as “Statewide fracking ban could hobble local economies” and “If you watch baseball, you support oil and natural gas.”

The oil and gas industry is on the political offensive in the wake of recent bans and moratoria in several cities. Boulder voters last year extended a moratorium on fracking until 2018. Voters in Broomfield and Fort Collins implemented five-year bans and voters in Lafayette and Longmont have passed outright bans, triggering, in some cases, lawsuits by the Colorado Oil and Gas Association, a trade group that “aggressively promotes the expansion” of the industry. The association has argued that state regulations supersede local bans as some 20 groups are now seeking approval for a variety of November initiatives ranging from restrictions to bans.

The key issue is whether localities and voters can regulate or ban fracking operations in their communities, says Rick Ridder of RBI Strategies & Research. Ridder serves as a consultant to Coloradans for Local Control and an issues group, Coloradans for Safe and Clean Energy. The groups support efforts to “allow communities to have some control over fracking within their communities,” Ridder says. That includes bans, but also limits, such as restrictions on how close oil and gas operations can be to schools, homes and hospitals.

“Increasingly we’re finding our kids’ playgrounds to be 500 feet or less from drilling pads that are spewing forth diesel fumes, leak toxic chemicals and ultimately end up in our groundwater,” Ridder says. “So we’re talking about the health of Coloradans — not just of Coloradans, but of Colorado.”

Ridder says the group will be mounting a visible media campaign.

“We anticipate that we will have enough money to run a very vigorous campaign to communicate to the voters of Colorado the benefits of local control and expanding setbacks,” Ridder says.

FCC filings show Coloradans for Safe and Clean Energy has already reserved more than $226,700 in ads with KUSA-Channel 9 and has filed a “Request for Broadcast Time” with KCNC-Channel 4.

On the other side is yet another group: the long-standing Coloradans for Responsible Reform, which is raising funds from interests outside the industry to defend oil and gas. Secretary of State filings show the group reaped $770,000 from an array of contributors, including FirstBank, Climax Molybdenum Co., Natural Soda Inc. and Kaiser Foundation Health Plan of Colorado. Each gave $25,000, according election records, money that will go toward combating “anti-business initiatives,” including those that “aim to ban oil and gas operations,” according to the group. The group also boasts some familiar civic names, including Kelly Brough, the president of the Denver Metro Chamber of Commerce, former Interior Secretary Ken Salazar, former Denver Mayor Wellington Webb and Howard Arnold of the Colorado Building & Constructions Trade Council (AFL- CIO).

Much of the pressure has been focused on public officials thus far, particularly state lawmakers who have struggled to reach a compromise that would avert an election confrontation between the energy industry and localcontrol advocates. With the 2014 legislative session over, Gov. John Hickenlooper reportedly has given 50/50 odds that a special session could be called.

Noble/Anadarko’s nonprofit, CRED, is also targeting lawmakers. An open letter printed in CRED’s Denver Post insert implores Colorado’s elected officials to oppose more regulations on the oil and gas industry because the state “already has the most comprehensive and stringent oil and gas regulations in the nation.”

“As we approach another election season, there may be attempts at the ballot box to change the way Colorado currently regulates the oil and gas industry,” the letter adds. “Rumors abound as to whether an initiative will attempt to ban development processes, like fracking, or turn our state into a confusing patchwork of inconsistency by transferring regulation of the industry to hundreds of local governments.”

Yet environmental groups have consistently questioned whether the state’s regulations on the industry are protective enough, particularly as a growing body of research sounds alarms. The latest example is a report this month by the Cooperative Institute for Research in Environmental Sciences at the National Oceanic and Atmospheric Administration (NOAA) that found that oil and gas operations along the Front Range are emitting significantly higher amounts of air pollution than state data indicates. The Boulder-based NOAA researchers concluded that emissions of benzene, a toxic carcinogen strictly regulated by federal law, were seven times higher than the state’s own data, which is self reported by the oil and gas industry. Volatile organic compounds that create “brown cloud” smog were twice as high — more than 13 tons per hour — only adding to concerns about Front Range pollution. Since 2007, the region has been out of compliance with the federal Environmental Protection Agency’s health-protecting eight-hour ozone standard.

Collentine with the Sierra Club says the oil and gas industry’s efforts to portray itself as authoritative and using green terms like “environment” in their campaigns begs some questions: “‘What is fracking? What is the quote-unquote truth about fracking?’ to use one of the lines that they have used in a lot of their materials,” she says. “People don’t feel safe in these communities where fracking is occurring or in these communities where fracking could occur. They know that air travels statewide; that if it is happening in their neighbor’s backyard, it could happen in theirs, and that’s concerning to people. So until folks in our local communities can look around and say, ‘I feel comfortable living here; I feel safe living here’ and that’s not in conflict with our energy development in this state, I think there is still a lot more to be done.”

Local control groups, she adds, may in the end be outspent by the oil and gas industry. She notes, however, it’s not just money that wins on Election Day, as voters in cities that have passed bans or moratoria discovered.

“I think no matter what the dollar amounts are that come to light, it’s not going to change the fact that when people are concerned about their air and their water and their family and their community, they won’t stop until they feel like they are safe,” Collentine says.