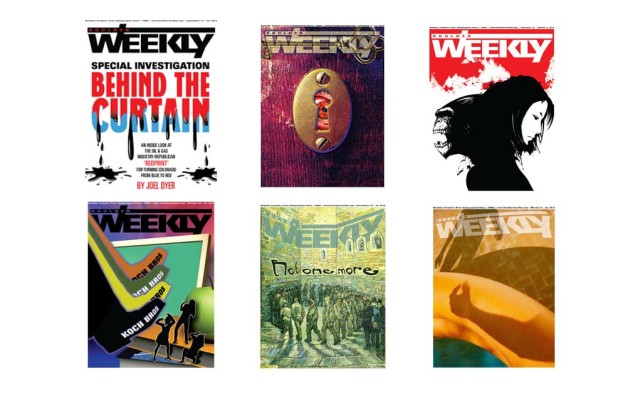 In this year’s multi-state Top of the Rockies contest put on by the Society of Professional Journalists, Boulder Weekly won 13 first place awards and 21 other honors for stories written in 2015. Results for the competition, which takes entries from news media in Colorado, New Mexico, Utah and Wyoming, were announced April 21 at the Denver Press Club. Boulder Weekly won more awards in the 30,000 to 75,000 circulation category (the contests most competitive division)  than any other publication in our four-state region.

Joel Dyer also won first place for his personal column “DyerTimes” and took another first for political enterprise reporting for “Behind the Curtain,” an in-depth investigation that linked questionable practices at the University of Colorado’s Leeds School of Business to the money and influence trail of the oil and gas industry and the state’s largest campaign contributors.

Matt Cortina and Angela K. Evans won for general reporting/series or package for “The Dark Side of Immigration,” their series that humanized the complicated issue of immigration through the voices of people in Colorado. “A cry for help” profiled a family of six, wherein the father and husband was arrested and detained at gunpoint even though immigration officials were looking for someone else. “Someone like me” profiled an immigration activist who is working tirelessly to help those in danger of deportation, even though she herself currently faces the same fate. “Home again” profiled a Latino man who had spent the better part of a year living in a church basement after claiming sanctuary. And “Not one more” profiled Muslim immigrant detainees on hunger strike at detention facilities across the country, including the one in Aurora.

Caitlin Rockett was awarded first place in arts and entertainment criticism for her music coverage which included “Throw down your preconceived notions” about Jake Schepps and the banjo’s place in music, “Some things you just can’t ignore” about 30 years with the Indigo Girls and “The tribal music of our time” about the South American duo Lulacruza.

Angela K. Evans won in agriculture general reporting for “The possible effect of best management practices in agriculture” about a CSU study that could result in a net zero greenhouse gas emission rate from agriculture in the Great Plains.

Dave Kirby took first in sports enterprise reporting for “Petitioning the overseers,” his first-person account of rafting the San Juan river for more than 20 years. He also won first in the single-story in arts and entertainment category with “Souls remembered and forgotten” profiling musician Steve Wilson and the unlikely inspiration behind his album Hand. Cannot. Erase.

Mollie Putzig was awarded first in science general reporting for “Capturing carbon,” her story about a new treatment process for wastewater developed by researchers at the University of Colorado.

Cassie Moore in health enterprise reporting for “Quadriplegic patient afraid hospital will deport him to Mexico.”

Cecelia Gilboy in politics enterprise reporting for “With the passage of HB 1057, have democrats once again killed your right to vote on fracking, this time in 2016?”

Matt Cortina in general reporting/series or package for “Selling points” about the plight of owners of manufactured homes in Boulder.

Noel Phillips for agriculture enterprise reporting in “20 years behind Europe” about diverting waste from landfills through anaerobic digestion.

Matt Cortina won a third place award for news reporting/single story for “Hightide” about rising heroin use in Boulder County. He also won in legal general reporting for “On the right track” about  oil-train regulations.

Angela K. Evans in  agriculture general reporting for “Collaboration at its finest” about the FRESH: Art farm exhibit at the Firehouse Art Center in Longmont.

Caitlin Rockett in health general reporting for “Climbing for Carleen” about raising funds for the American Liver Foundation through mountain climbing. She also won in education general reporting for “Statewide survey sheds light on health experiences of LGB but not T high school students for the first time;” in news feature for “Out of the shadows” about LGBTQ seniors in Boulder County; and in politics enterprise reporting for “Insufficient data” about Boulder’s controversial right-sizing project.

Katy Neusteter, Russell Mendell and Christian O’Rourke in environment enterprise reporting for their on the ground coverage of COP21 in the series “Dateline Paris.”