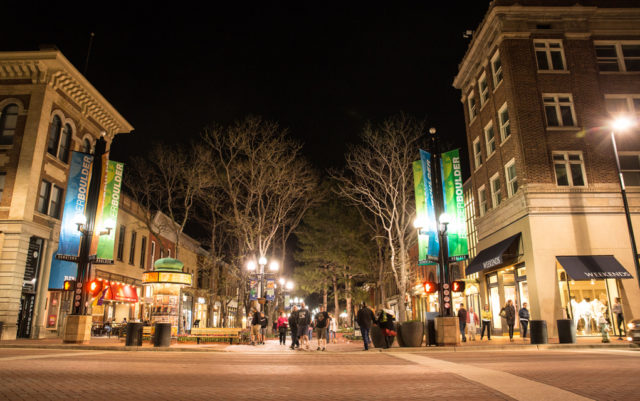 Think about your favorite local business. Your favorite watering hole or hair salon or boutique outdoor retailer. Don’t — for just a minute — take for granted the changes they made with constantly evolving public health orders, inconsistent financial support and rapidly changing consumer habits. (If “pivot,” by the way, is not Merriam-Webster’s word of the year, then they haven’t been paying attention). Now ask yourself: How in the name of Alan Greenspan are they still in business?

“Small business owners are the most innovative and flexible and resilient group of people you’ll ever meet, otherwise they wouldn’t be in business,” says Chip (it’s just Chip), CEO of the Downtown Boulder Partnership, a nonprofit coalition of local businesses.

Fair. That ingenuity has been on display this year. But now comes another challenge in a year full of them: Can local, independently owned businesses make enough in a watered-down holiday season — a time when many typically earn a chunk of their annual revenue — to make it through 2020? And what happens in the three cold, dark months that follow?

Scan news articles or just drive through the downtowns of Boulder County cities and you can count the number of businesses that have succumbed to the economic constraints of the pandemic. It’s a significant, but not overwhelming, number of closures.

What’s more concerning for businesses and local trade groups is the number of businesses that can’t hold on much longer. A recent survey by the Colorado Restaurant Association, for instance, found that nearly four out of five restaurants would consider closing in the next six months if indoor dining were shut down. (Indoor dining is paused in Boulder County, and about a dozen others, starting Nov. 20.)

Local businesses need a fruitful holiday season and a manageable winter because the year has been so bad for so many. These problems compound, whether business owners need to catch up on debt, prepare for payments on credit or rent, or simply make money again so they, themselves, can live.

One statistic we can use to quantify the economic damage is sales tax revenue. In Boulder, sales tax revenue is down citywide by almost 10% from last year, with about half of the decline attributed to downtown businesses. Retail sales tax in downtown Longmont is down 22.8% this year compared to this time last year — more than $11 million in lost revenue.

That’s a problem in Longmont particularly because downtown is mostly locally owned. By comparison, sales tax revenue in Village at the Peaks on S. Hover, with more big-box stores (though not exclusively), is actually up.

“Our downtown particularly is small local businesses. Small local storefronts tend not to be chains. Without that corporate safety net, it has been taking a toll on our small business,” says Kimberlee McKee, executive director of the Longmont Downtown Development Authority (LDDA). “Many other downtowns still have the big-box stores on the fringes or chain stores. Ours literally does not. Those that have been really sales-tax-generating cash cows within the economy right now, none of those show up in our district.”

It’s a similar story in Lafayette. Chains are one reason citywide sales tax revenue has stayed flat there — a lot of folks shopped at Wal-Mart this year — but there’s been an 18.4% decrease in sales tax revenue from Old Town businesses, which are almost exclusively locally owned.

Lodging tax revenue is also a good indicator of how many tourists are coming in and patronizing local businesses. Bad news there, as you might imagine: It’s down upwards of 60% in Longmont, Louisville and Boulder.

In talking to local businesses, Chip says the effect of companies implementing work-at-home policies is substantial.

“Not much more than 10% of the folks who usually work downtown in offices are working downtown,” he estimates for Boulder. “They’re working at home or not coming in as often. All of those are people who aren’t buying lunch or going shopping after work.”

Too, local businesses, particularly restaurants, employ thousands of people in the state. A high unemployment rate, of course, ripples through the local economy, and the numbers aren’t great for Boulder County despite modest gains since April. The unemployment rate in the county was 5.8% in August, when data was last available, compared to 2.3% in August 2018. Statewide, almost 150,000 jobs have been lost since last year.

And so businesses may yet shutter without further assistance — Polis recently announced a plan to provide stimulus funds for restaurants. But that’s a stop-gap measure; necessary shutdown orders infringe on the sustainability of local businesses, particularly restaurants, now which have to contend with no indoor dining.

“It’s certainly a challenging circumstance,” says Scott Sternberg, executive director of the Boulder Economic Council, citing the progressively declining occupancy allowances in restaurants. “That’s obviously what you would not like to see as a restaurant owner. That’s where they make their money. There are bars and restaurants and shops that are closing. You can read the newspaper and see some iconic restaurants [closing]. It is a concern.”

“Some people have been able to adapt and some people aren’t in a position to for different reasons,” Chip adds. “Honestly, it’s all over the place. We’re seeing some businesses have gotten through so far pretty well and for some people, it’s been really impossible.”

We may not know how many local business may close until late next year, he says, adding that many may just decide to close up shop until warmer weather returns.

“I think we may very well see businesses deciding to just shutter for the first quarter of 2021 because the cost of being open is more expensive than not being open at this point. Hopefully it won’t be too many businesses we see do that, but I get it,” he says.

Landlords have a role to play in this, too. Each tenant-landlord relationship is unique, and business owners report some landlords are being more flexible than others, at least for the time being. Property owners, as easy as it is to blame them, have financial obligations, too. What seems obvious is that an empty storefront is bad for both parties — though ask around and you may get some different opinions.

What’s more, Dave Query, chef/owner of the Big Red F restaurant group, thinks local businesses — not national chains — are the best tenants for property owners because they’re much more invested in the success of the business operating the space.

“It’s the nationals are being hit the hardest,” he says. “Those guys are shutting down, claiming bankruptcy. It’s the small, intelligent, independent operator who’s going to survive this because we’re scrappy — doing ghost kitchens and figuring out how to survive. We didn’t have an IPO. This is do or die”

“Amazon will make it through this without missing a beat,” she says. “It’s our small local businesses that need support. They’re the first ones that ask to sponsor our kids’ sports team.”

To make that shift, people are going to have to change their habits. For all the talk in the grocery store realm of consumers shifting habits rapidly once the pandemic hit, a similar evolution hasn’t necessarily occurred across all industries.

“I think people aren’t in the habit of shopping online locally, and Amazon, for example, has been doing this for so long,” Chip says. “If you’re going to look for a product, they’re going to come up so you have to take that extra step. I don’t know if people are adapting. People know the businesses they know and the products at those businesses and people will make an effort, but now there’s a moment for people to say, ‘I’m looking for this and rather than going online, let me try to find it in Boulder.’”

And the experience of shopping for something with a local retailer that you could easily find online might be more beneficial, McKee says.

“These local businesses will go well above and beyond,” she says. “They will be active and get on a Zoom call with you and show you each and every item. They go the extra mile.”

Sternberg says, “there’s a spirit of collaboration,” though, that is yielding some positive results that might mitigate any shortfall in revenue this winter. For instance, business and restaurant industry members worked with the City of Boulder to launch the Safe Ordering Service (S.O.S.), which, with CARES Act funding, subsidizes the cost of delivery fees to restaurants, which can quickly eat up half of the margins they were hoping to make.

McKee adds, “certainly we are hoping there’s another stimulus act,” which brings up the other part of this equation: the consumer. Another stimulus package would provide more financial security for consumers so we could support all these local businesses.

McKee also lauds the City of Longmont for allowing expanded outdoor dining, as other cities in the County did — though because Main Street is also a state highway, options to keep that open in the winter were minimal and the City ended the program until next year.

Indeed, what makes this winter so critical for local businesses is the sense that if they can just get through these next few months, back into warmer weather, they’ll have figured out how to make this new normal work.

“A little bit goes a long way as you’re trying to bridge to a busier season,” Sternberg says.

But much of the future is unknown — when we will get a vaccine, if people will take it, what consumers habits will be.

“I think we probably will at some point in the first half of next year have a vaccine and the virus will get under control a little bit,” Chip says. “I think people will have pent-up demand. Some people will be really gun shy and not want to go eat in restaurants for years to come, but I think we can anticipate some semblance of returning to what it was in many ways by the first half of 2021. Of course nobody has a crystal ball; I’m just basing this on reading a lot.”

For Longmont, which has in recent years accelerated the revitalization of downtown, McKee says the pandemic was unfortunate timing, but it’s not putting a crimp in the explosion of new people to the area, which then support local business. A project with 170 affordable units, for example, just broke ground, and the apartment complex in the old Butterball location is already occupied with 400 new tenants, even though it finished as stay-at-home orders were first being put in place in March.

But in order to fully realize the fruits of that influx of people, or for businesses throughout the county to rebound once the winter is over, they have to stay afloat until then. And to do that it’s going to take the support of the community, and more creativity.

“It’s looking at the way you spend money in your community and support businesses, even if it means you weren’t necessarily going to get so-and-so a present, but you’re going to get something from a Boulder business you support, whether it’s a gift card or dinner or a puzzle,” Chip says.

McKee has an even bigger idea.

“The holiday season is going to look different for everyone,” she says. “You can gift some now, but maybe we make Groundhog’s Day the best gift-giving holiday there is. We’ll use different strategies to make sure local businesses stay top of mind.”