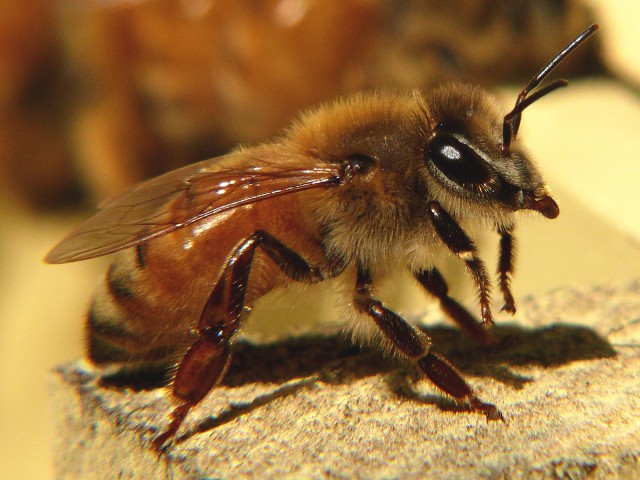 In 2006, professional beekeepers in the U.S. began to report mass die-offs of their honeybee colonies, between 30 and 90 percent. Since then, “Colony collapse disorder” hasn’t slowed down.

While CCD doesn’t account for all colony losses, the U.S. is seeing an average loss of about 33 percent each year. A third of these losses are attributed to CCD. It’s a big deal with bee pollination responsible for more than $15 billion in increased crop value each year.

Voarra mites, a virus-transmitting parasite of honeybees, have frequently been found in hives affected by CCD. One possible use of RNAi technology, under development by Monsanto, is a product to kill the voarra mite, which has been at least partially blamed for recent mass die-offs of honeybee.

But many scientists have questioned whether it’s a saturation of chemical pesticides that might be responsible for CCD.

“Take a look at Bayer BeeCare — they are putting a lot of neonicitinoid seed treatments on corn. Almost 100 percent of corn seed is treated with neonics, but Bayer at the same time has a BeeCare Project where they have this PR campaign to send educators out to the public to talk about how to conserve pollinators. And this is related to overuse of pesticides and the simplification of the landscape due to large production agriculture,” Lundgren says.

In late 2011, Monsanto purchased international bee research firm Beeologics, which has searched for answers to honeybee destroying conditions like CCD and Israeli Acute Paralysis Virus since 2007.

Lundgren sees RNAi technology as perhaps one part of the solution for CCD, but say it’s not going to completely solve the problem, but simply mask a symptom.

“Can we use RNAi technology to potentially fight the voarra mite? Maybe. Can we use it to manage the corn rootworm? Maybe. But it’s not going to solve the larger problem of we need to diversify our landscapes in order to provide habitat and keep things sustainable, farm production sustainable for the long term,” he says.