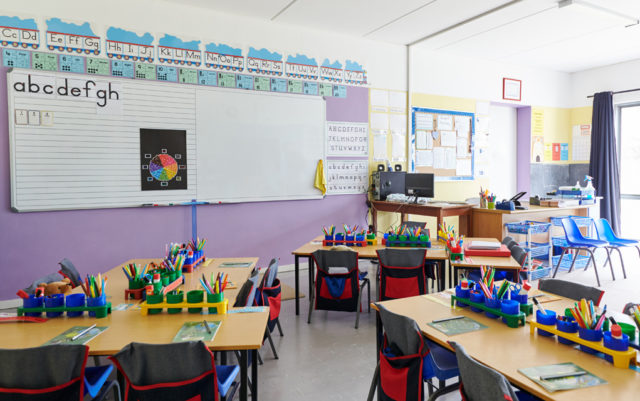 Kids, particularly those who are under 6 or are neurodiverse, learn critical socialization skills in school. But with local school districts switching to online classes for the remainder of the school year, specialized education institutions like preschools and special ed centers are following suit, creating a dilemma: How does one teach social skills without being allowed to be social?

Amy Cavanaugh Chally, director at Mt. View Preschool in South Boulder, says teaching social skills is the main focus at the school, and it can’t be replicated at home.

“The academia for little kids, that will catch up. That is not a concern at all,” Chally says. “It’s about learning how to work in a community situation. How to work in groups. How to share, how to make friends, how to approach a friend group. It’s all social-emotional learning that’s happening here, and it just can’t be recreated at home with your family. It has to be introducing [kids] to new groups of friends and forming your own communities and forming your own groups outside of your family.”

Even as social distancing requirements relax in the coming year, Chally says Mt. View will have to limit class sizes to 10 students, and make sure classes are separated into different rooms. The long-term financial impacts for the nonprofit preschool are large and unknown — its furloughed most of its staff — but the ramifications for getting kids back into school, any school, could be substantial, given the likelihood of limiting class sizes at all preschools.

“The major concern is what’s going to happen in the fall when they can only take half as many kids? Where are all the kids going to go?” Chally says, adding that state regulators “haven’t had an answer on that yet.”

Chally says it would betray Mt. View’s mission to raise tuition to make up for the smaller class sizes, but that she’s concerned other families might face that burden and some schools might have to disenroll kids.

At the Temple Grandin School (TGS) in north Boulder, which serves a small neurodiverse student body (those with autism, Asperger’s and other developmental disorders), executive director Jen Wilger is concerned about making sure kids get the kind of individualized education and socialization their families signed up for. As part of TGS’s socio-academic program, for instance, students work on a research project about something that interests them, while teachers assess how much the student grows during the process. That core program has been difficult as the school has transitioned to remote learning, Wilger says.

“They’ve got a very structured set of procedures they’re doing to improve a skill or develop a new skill,” she says. “With that program in particular, it’s more about the process not so much the product, being able to have teachers monitor work on a daily basis. We’re doing it virtually but it’s tricky, especially with younger middle schools students. Following directions given online, we have to do a lot of explaining and screen-sharing because they don’t keep that in their heads.”

And in TGS’s “Perspectives” program, building social skills through natural interactions is the key focus, but it’s been made impossible by the switch to remote learning. Wilger likens the project to a group “science fair but a little higher intellectual level,” wherein students dive into a STEM-related project in a group, and teachers who could monitor social interaction have real-time feedback on how one student is working with his or her peers.

“The bottom has gone out of that,” Wilger says. “Our kids were grooving on it, they love thinking about big problems and talking about ideas. The content is exciting to them enough to the point they can overcome the challenges of working in a group. That piece is missing right now.”

But the benefits of socialization in schools like Mt. View and TGS extend beyond school walls — the connections they make there lead to friendships, which extends social learning. it is particularly critical for neurodiverse kids, Wilger says, who may have had difficulty making such connections in public school.

“The thing that’s hard for our kids right now is they’ve struggled so much along their educational journey and eventually have found their way to [TGS], where they feel settled, they’ve found their tribe, they’re part of a fun community and they’re just drinking in that experience. To have that cut off has been the hardest part.”

TGS is helping foster those friendships by providing activities for families to keep their kids engaged, and by facilitating Minecraft and Dungeons and Dragons games to keep students engaged with one another

“We’re building in ways for them to connect,” Wilger says.

That’s one thing Firefly Autism, which serves the Front Range, is embracing, despite the challenges posed by remote engagement. When stay-at-home orders were first announced in Colorado, Firefly “immediately converted all of our programs to telehealth,” says Jesse Ogas, executive director of Firefly.

The biggest difference, outside of the technological interface, is the structure of those lessons — instead of a six-hour in-person program, now students have about two hours of remote instruction. But the new normal has its benefits, Ogas says.

“For some of our students it’s been a very difficult transition,” he says, “but there has also been some really amazing things happen since this. One of the most important things I think is we have seen a level of family engagement that we’ve not seen before.”

Maintaining any level of structure and normalcy is paramount for Firefly’s patrons, Ogas says, not only because it keeps their social and academic development on track but because moments of turmoil, like this pandemic, are particularly tough on neurodiverse people.

“For us as neurotypical individuals, the pandemic has been scary, frustrating, daunting, because it’s the unknown. But for a child on the spectrum it magnifies for them because some of our kids aren’t necessarily verbal. For them to try to express the fears, the anxieties, the unknowns… to them it’s very difficult. You see that in acting out, you see it in self-injurious behavior or behavior that hurts others in the household, or they break things,” Ogas says, adding that that’s not been the norm and that Firefly staff will administer in-home work, following health guidelines, if necessary.

But there are a few silver linings in all of this. Ogas says the switch to telehealth services has helped start the conversation with insurance companies and Medicaid to allow for such services to be covered. And, he says, it’s been a good time to grow the numbers of both staff and students.

Wilger says the connections staff and students have forged at TGS are helping the switch to remote learning succeed, so much so that the school may incorporate it into future offerings.

“It’s been so successful that it’s caused us to wonder, are there other kids for whom this would work that we’re not currently serving?” she says. “The key thing we’re continuing to provide is really the depth of our relationships. Our teachers really know these kids and can anticipate what their challenges will be. And so the comfort level of making that connection was already there before we started the online [programming]. They’re able to continue that. The support is felt in a real way.”

TGS has also been able to secure guest speakers within the neurodiverse world to chat with students over Zoom that they normally wouldn’t be able to secure because they were too busy in the pre-pandemic world. Temple Grandin has spoken to students herself, and on the schedule are Chris Bonello of Autistic Not Weird, who will speak about perfectionism and creativity, and Michael McReary, a young comedian on the autism spectrum.

Ultimately, though, educators can’t replace the benefits of in-person teaching and socialization. And it’s important, Chally at Mt. View says, for these specialized schools to open so the rest of the economy can too.

“We need centers to be open and we’ve been told by public health if you don’t have a place for kids to go then it’s going to be impossible for us to open the economy,” Chally says. “We have just as many concerns and questions as they do. I think some people might think it’s irresponsible for childcare centers to open but there are people who need it.”

Chally adds that if there’s any group of organizations built to handle a post-COVID-19 world, it’s schools, where staff are already trained in first aid and universal health precautions.

“This is part of our industry,” she says. “Kids get sick, and we try all the time to prevent the spread of illness. We are kind of familiar with these kinds of issues.”