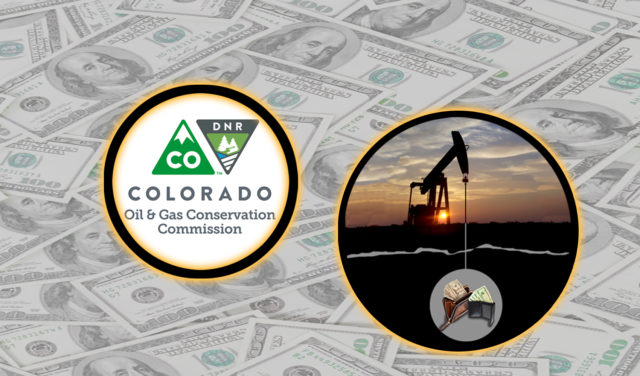 You’ve seen the commercials: Good-looking people in vests and their good-looking dogs walking by crystal clear mountain streams, a burly voiceover saying something like, “Taxes from oil and gas development are helping fund schools and improving communities,” or “Colorado has the most regulated industry in the country.”

Well, it was disclosed at a state budget committee hearing on Dec. 12 that there may not be enough money to fund well inspectors, Colorado Oil and Gas Conservation Commission (COGCC) staff, and dozens of other programs in the state’s Department of Natural Resources (DNR) as soon as February 2018.

“I guess it depends how bad it gets,” says DNR Budget Director Bill Levine of what will happen if the department runs out of money. “Certainly there’s going to be a point where fund equity reaches zero and we can’t pay expenses, which means we can’t pay to put fuel in our cars, which makes it difficult to be an oil and gas inspector.”

No amount of industry-employed soccer moms and waterfalls on TV can make that reality sound good.

DNR, and by extension the COGCC, is funded in part by a severance tax — a tax on the extraction of natural resources. But because of millions of dollars of refunds to oil and gas producers, the state is actually giving the industry more money than it is collecting from it. In fact, it’s on the hook to pay the industry as much as $72.5 million in the next 18 months. It has already refunded oil and gas producers $6.5 million more than it collected this fiscal year, which started in July. And the state refunded oil and gas operators $126.5 million last fiscal year, which is $7 million more than it collected from the industry.

I suspect most people will be shocked, after hearing for years how the state government’s support for the oil and gas industry was based on how much money it provided to state coffers, to learn that, as of now, oil and gas companies are taking more money from the state than they are putting in by way of the severance tax.

As a result of this shortfall, several smaller DNR programs already lost funding on Wednesday, Dec. 20, and if lawmakers don’t divert taxpayer money from other parts of the general fund, or find new funding mechanisms, to compensate for the loss in oil and gas severance tax revenue, entire divisions within DNR such as the COGCC, Colorado Parks and Wildlife and others will start to shut down next spring.

Levine says the general fund, which is funded by taxpayers across the state and pays for everything from education to health programs to prisons, is “an obvious source,” to make up the financial shortfall.

There may be no other feasible option. State Rep. Mike Foote (D-Lafayette) says he expects “the industry will strongly object” to alternative measures like raising mill levies or taxes, and that those measures likely wouldn’t be enough to keep the DNR’s major divisions and programs running.

“Even if they raise the mill levy as high as it can go under current law, it won’t make up for the COGCC operating cost shortfall. So I expect the rest will come from the general fund. That means less money for other budget items like education funding,” Foote says. Education makes up about 40 percent of the state budget, the largest allocation of state general funds.

The shortfall is due, in large part, to a new tax deduction given to oil and gas producers in Colorado last year, when the Colorado Supreme Court ruled after 10 years of court battles that oil and gas operators could deduct from their taxes the capital costs for building oil and gas infrastructure. The state started paying out refunds to any oil and gas producer who could claim an applicable refund within the three-year statute of limitations.

That decision appears to have made the state’s effective severance tax rate the lowest in the country — at 1.7 percent in 2015, it was second lowest to only Utah, and with this new deduction worth hundreds of millions of dollars, Levine speculates “that rate will have to come down” when data becomes available.

In response to the Supreme Court decision, the state legislature allocated more than $70 million to pay the refunds, and Levine says a “large portion of the refunds,” came from the general fund.

The ship was thought to be righted after those payments, and the future seemed bright as revenue projections for the industry’s severance tax collection reached $150 million last fiscal year. (As the severance tax is assessed on the gross income from oil and gas operations, a good year for the industry means more money collected for state programs.) But Levine says he started noticing that, despite increased projections, actual collection figures were much lower than what was forecast.

It underscores the volatility that Levine says makes it difficult to project severance tax revenue from year to year. Economists must predict what individual taxpayers (oil and gas companies) might file on their returns and what energy prices will be months ahead of time. Revenue from the tax has gone “up and down by an average of 82 percent from year to year” over the last nine years, Levine says.

Add in the unforeseen $72.5 million in outstanding refunds per the Supreme Court case, and you have what is being described in the DNR as a “crash.”

“In November, we got a memo about [the] outstanding refunds, and I started screaming, almost literally, saying, ‘Oh my god, we’ve got a real problem here,’” Levine says.

“We thought, ‘Well, gee, we paid so many refunds last year,’ we assumed the majority of [refunds] had been paid. That assumption that I made and others made was incorrect,” he says.

The funding deficit affects all branches of the DNR. Programs in the department are separated into two tiers; Tier Two programs, which include grant-based initiatives concerning conservation, water efficiency, invasive species management, dam oversight and more, will no longer be funded until the budget is restored, likely not for at least a year and a half.

Tier One programs, such as the COGCC and Colorado Parks and Wildlife, will have funding until February, or June at the latest, but then “programs themselves will start to shut down,” Levine says. And there’s no special prioritization given to programs some may deem more critical than others.

“Once fund equity zeros, it does not matter what Tier One program you are,” Levine says, “they will all be shut down.”

The Department of Local Affairs (DLA), which gets roughly half of severance tax revenue, relies on those funds to build fire stations, restore historic sites, update water services and more. Its budget operates independent of DNR, though it was noted at the recent budget committee hearing meeting that DLA “will adjust future [grant] award cycles accordingly” if severance tax funds don’t meet expectations.

Without that revenue, the costs for both DNR and DLA projects will be passed on to local taxpayers in the form of, say, mill levies for fire infrastructure and boating licenses to ensure those on lakes aren’t carrying non-native species.

The programs will likely still be able to make payroll, but they won’t be able to fund the projects for which the departments are responsible. For reference, the COGCC has 29 oil and gas well inspectors on staff, and every well is inspected, in theory, every 1.5 years. During incidents, like the recent home explosion in Firestone that killed two people, the COGCC spent over 10,000 hours and half a million dollars in response. It’s unclear in the current climate if such funds could be made available should a similar tragedy occur in the future.

It’s worth noting that the COGCC, in particular, also receives funding from the Oil and Gas Conservation and Environmental Response Fund, but “low oil and gas prices” have hampered revenue, according to DNR documents. The severance tax makes up about half of COGCC’s budget, and 15-20 percent of DNR’s total annual budget.

Levine says there are a lot of conversations going on in the statehouse as to how to make up for the loss of revenue, and that among people outside his budget office who are going to make the decisions, there is a sense that “the stakes are high.”

Foote plans to introduce a bill next session to remove two deductions the industry is currently allowed to take — a deduction of up to 87.5 percent on property taxes; and an exemption on wells that produce less than 15 barrels per day. Foote says these represent about $250 million in “loopholes,” or lost revenue, per year.

Levine says eliminating the property tax offset would “make the revenue stream less volatile” to boot, but adds that, “it’s been briefly pondered before and tends to get shot down pretty quickly. Industry is pretty clearly opposed.” Some local municipalities also oppose eliminating the credit as they can raise property taxes without much friction because the oil and gas producers can write much of it off.

Thus, the $11.5 billion general fund seems to be the last best option for the second year in a row. Foote says the “Joint Budget Committee would probably find some way to avoid taking it from education, but that’s not easy,” given the large percentage of general fund money that is used for K-12 and higher education programs. The next highest recipient of general fund money is health care, and then correctional operations. That’s about it.

You’d think — considering the tens of millions of dollars the industry spends on marketing to tell us how concerned it is with our health and safety and how Colorado has the nation’s toughest oil and gas regulations — that oil and gas companies would be more interested in ensuring the state has the money to safely regulate their industry rather than finding loopholes to defund that regulation. Guess you can’t believe everything you hear on commercials.