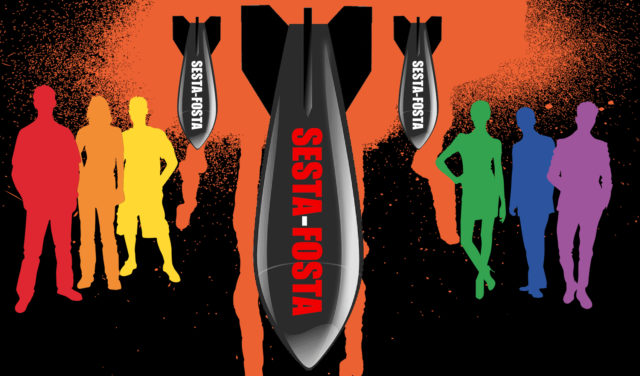 On April 21, 2017, Sara Connell released the first episode of the Queer Sex Ed podcast, a component of her larger Queer Sex Ed project. It was the beginning of turning a long held dream into reality. After a decade as a sexual health and LGBTQ educator, first at CU Boulder and then with Boulder-based LGBTQ nonprofit group Out Boulder County, Connell set out on her own to “fill the gap” she saw in sexual health content with sex-, transgender- and body-positive workshops and training sessions.

“I really feel like sex education is a lifelong process,” Connell says. “I really wanted to create a resource where I saw myself reflected in that type of content because there wasn’t really anything going on that was about trans people and was about sexuality and kinkiness and polyamory and sex toys and education and safety and health.”

But just shy of one year later, on April 11, 2018, Congress passed a bill that threatens the very existence of Connell’s Queer Sex Ed project, and pushes online queer communities and queer education even further to the margins.

The Stop Enabling Sex Traffickers Act (SESTA) and Allow States and Victims to Fight Online Sex Trafficking Act (FOSTA) package was an overwhelmingly bipartisan effort by both houses of Congress to clamp down on sex trafficking and online personals sites. The bill was at least partially a response to the federal investigation and eventual seizure of Backpage, a classified advertising website that had long been under scrutiny for its adult services section. Critics claimed Backpage knowingly allowed ads related to prostitution and trafficking, particularly of minors. On April 6, 2018, Backpage and its associated websites were shut down, and Trump signed SESTA-FOSTA into law just five days later.

The law gets its far-reaching power by making an exception — the first in internet history — to the “safe harbor” rule of the internet, Section 230 of the 1996 Communications Decency Act. This important piece of legislation has made the internet the thriving marketplace of ideas (both good and bad) that we know today by shielding internet platforms and service providers from any legal responsibility for user-generated content.

Now, sex is the exception. Platforms like Facebook, Craigslist and Tumblr can and will be held responsible for any content that advertises prostitution, including consensual sex work.

In response, platforms across the internet — the aforementioned included — dramatically revised their terms of service to more aggressively police adult content.

Craigslist shut down its beloved personals section just a few weeks before SESTA-FOSTA was signed into law, and by early December, Facebook unveiled a new set of community standards that cracks down on content that “facilitates, encourages or coordinates sexual encounters between adults” as well as sexually explicit language such as “breasts, groin, or buttocks.” (The standards say that such language must be paired with “an offer or request to engage.”)

As of Dec. 17, microblogging site Tumblr banned “adult content,” defined as anything that depicts “real-life human genitals or female-presenting nipples, and any content — including photos, videos, GIFs and illustrations — that depicts sex acts.”

“When I was growing up, the only exposure I had to anything that I was interested in — which was queer, trans, gay, anything that wasn’t super normalized [cisgender, heteronormative] society — was on the internet because it didn’t exist anywhere else,” says Josie Nixon, a nonbinary professional living and working in Boulder.

Nixon’s experience is a familiar one for queer youths.

“Since LGBTQ identities have often been stigmatized, the internet has been pivotal in helping those with diverse gender and sexual identities learn about themselves and find each other,” writes Stefanie Duguay, an assistant professor at Concordia University, for nonprofit website The Conversation. “Tumblr has provided a safe space for this through many of its key features (e.g. pseudonymous accounts, reblogging) and the communities it attracts.”

And basically overnight, that was all gone.

While a vastly different platform than Tumblr, Craigslist also provided a safe space for queer identities to talk, meet up and explore.

Freedom Network USA, the largest domestic network of anti-trafficking advocacy groups and experts, echoes Nixon’s skepticism in its letter in opposition of SESTA-FOSTA:

“FOSTA expands the criminalization of consensual commercial sex workers under the guise of addressing sex trafficking,” the organization states. “This squanders limited federal resources and puts sex workers at risk of prosecution for the very strategies that keep them safe.”

Other organizations, programs and academics across the nation sent similar letters warning Congress that SESTA-FOSTA would do little more than censor and criminalize speech online while pushing sex workers — including victims of trafficking — deeper into the shadows.

For many LGBTQ youths, sex work often becomes a means for survival. A 2015 survey of 300 LGBTQ youths in New York City who were engaging in sex work revealed that homelessness was a primary driver, many of them having been rejected by their families or “aged out” of the foster system.

“Sex workers are disproportionately more likely to be marginalized identities — all marginalized identities in general, but especially queer people and transgender people engage in sex work,” Connell says. “Sometimes because it’s something people want to be doing and sometimes it might be the only option that they have available because of classism,” which can take the form of refusal to hire, privacy violations, harassment, and even physical and sexual violence on the job. Transgender people of color experience these violations at even higher rates.

So, by comparison, sex work can be a very appealing job for many queer people — and people with disabilities, Connell notes — because it provides financial stability, flexible hours (important for those who have numerous doctors appointments) and a degree of independence from a system that often tells queer folks they don’t belong. And with sites like MyRedBook and Rentboy, sex workers could find and screen their own clients, with no need for agencies or pimps that once provided clients, and at least a certain level of safety.

But, according to a report by COYOTE-RI, a sex worker advocacy group in Rhode Island, more than 20 popular websites sex workers use for advertising and screening (including MyRedBook and Rentboy) were shut down within two weeks of SESTA-FOSTA passing.

“The problems that exist with sex work don’t exist because sex work is particularly bad or dangerous or harmful or scary,” Connell says. “The problems that exist with sex work exist because we live in a really unequal society and we live in a society that harms people. I do care about the labor rights of sex workers and yes, sometimes people do get forced into sex work in a way that’s really unfair and really gross, but the solution to that isn’t getting rid of sex work. The solution to that is making a more equitable society where people have health care and access to food and water and housing and they don’t have to engage in sex work in order to get it. But I think we’re quite a ways away from that right now.”

Connell says she “fears” Queer Sex Ed podcasts may be taken off iTunes or the website might be closed “because it has sex in the URL.” The methods platforms are using to deal with banned content are “broken,” she says, echoing the concerns of other experts who point to the fact that content monitoring is often outsourced to other countries where people work for low wages and have different cultural backgrounds, meaning varied views on what constitutes truly inappropriate content.

“It’s really easy for people to abuse these tools even before SESTA and FOSTA,” Connell says. “And even more so now.”