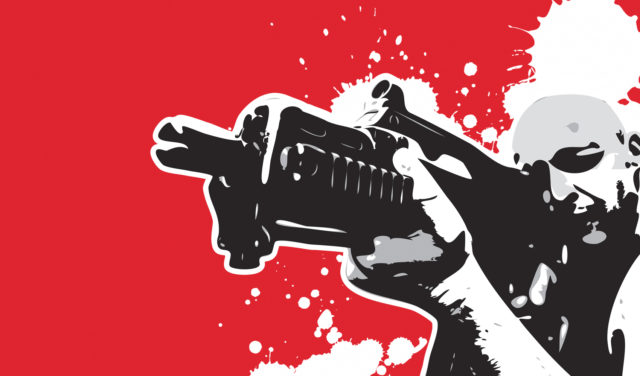 Last summer, 17 Colorado teachers met at the Weld County Sheriff’s Department shooting range to take part in a three-day firearm training course. They learned about the psychology of school shooters, took target practice and learned how to administer medical care. The course website provided a gear list, which included a gun (ideally a 9-mm semi-automatic), three full-capacity magazines, a holster, a magazine pouch, a gun belt, and ear and eye protection.

This year, in the wake of a school shooting that killed 17 students at Marjory Stoneman Douglas High School in Florida, there are 50 teachers registered to take the class, and the potential for more.

In 2017, Laura Carno brought the course, FASTER (Faculty/Administrator Safety Training and Emergency Response), to Colorado with the help of the conservative think-tank Independence Institute. In the last five years, Carno says 1,300 school officials have been through the program in Ohio, where it originated.

With President Trump saying multiple times recently that arming teachers is a viable approach to preventing school shootings, programs like FASTER may likely serve as early models for training that Legion of educators.

Colorado being a state that allows the concealed carriage of guns makes it a prime test case for the practice.

The negative response since Trump’s first suggestion of arming teachers has been clear: many teachers just don’t want the responsibility of a) carrying a gun, b) carrying it in school, and c) having to discharge it in the event of a school shooting. Many local (including Boulder County,) state and national teacher and school organizations have come out against it. Amy Baca-Oehlert, high school counselor and Colorado Education Association vice president, sums up this position well:

“Violence met with violence results in more tragedy and is not the kind of vigilance we want for our students. It is the wrong conversation to be having in order to solve the problem of school safety at its source,” she says. “Arming school employees will not keep students and educators safe. More guns is not the answer.”

But as evidenced by the FASTER program, there are teachers who are interested in carrying guns.

In Colorado, the school board must vote to allow members of the staff to carry concealed weapons on K-12 campuses. Carno says this requirement ensures that firearms are only given to qualified school staff of the districts’ choosing. As another check, FASTER enrollees must already own a concealed carry permit from the state.

Carno adds that if there is a commonality in the people who have attended FASTER classes, it’s that “their temperament tends to be focused on saving lives.” They also, she says, often outperform law enforcement that their instructors (largely current and former law enforcement and military members) have trained.

But Boulder Valley Education Association President Tina Mueh says there is no way to judge how a teacher with a firearm would react in an emergency situation even with their experience, training and firearm accuracy.

“I don’t think we could come up with a process that would screen for the right characteristics of someone who should be able to have guns around kids and adults in a school. It would be impossible,” Mueh says.

The “screening” process also provides schools an opportunity to tell law enforcement which staff members are armed, Carno says, so in the case of a school shooting, they won’t be identified as the harmful actor. Carno says, “Law enforcement sees the armed staff as an extension of their own force.”

“The difficulty with people other than the active shooter having a weapon is that we don’t know if that person is a good guy or a bad guy,” Pribble says. “So when we come in looking for the person that’s doing the harm within the building, we see a person with a weapon, we have to assume automatically [they could be the shooter]. It doesn’t mean we’re going to shoot them, but we have to go through the process that we know who they are. That’s something that could slow us down in an active shooter situation.”

The investigation of a shooting at a Walmart in Thornton last year was slowed because people drew concealed weapons and police had to identify the shooter on surveillance tape, according to Thornton police. It took five hours to find the shooter.

Pribble says CU Police go through regular training sessions, including some live-action scenarios with local law enforcement. That type of situational training is something Carno says FASTER covers in their classes — specifically how to use lethal versus non-lethal force and how to recognize shooters from non-shooters — but she declined to share how, saying, “We don’t want potential bad guys to know.”

Slow law enforcement response times and inaction is one reason people give for arming teachers. Police and investigators received tips about the shooters at Stoneman Douglas and Sandy Hook, yet the massacres still occurred. A police officer was on the scene at Stoneman Douglas and did nothing. Hanover School District 28, a rural district outside Colorado Springs, recently approved a measure to arm teachers, citing up to 30-minute response times from law enforcement.

And though response times for law enforcement are quicker in most areas than the eight minutes Trump cited recently (Pribble says his team can be anywhere on campus in 90 seconds), the truth is, with assault rifles, shooters can kill dozens of people in seconds, before a 9-1-1 call is even placed.

All things considered, there is little evidence available to suggest that arming teachers will successfully deter school shooters. Carno says there has been plenty of anecdotal evidence that the FASTER program has worked in Ohio. Though many argue arming teachers may actually lead to more deaths, Mueh says districts must also consider that many teachers just won’t feel safe if their colleagues are armed.

“While I trust my colleagues in the classroom to do their jobs, and I totally honor the professionalism of everybody, it is a totally different question about who I trust to carry a gun around our kids and around our colleagues, frankly,” says Mueh.

Yet with concealed carry laws, we’re already around civilians with guns. Students and faculty are allowed to carry concealed weapons on the CU campus, and Pribble says not knowing who is carrying a weapon complicates the police force’s job. Responding to calls about a potential gun on campus is typically more harrowing, Pribble says, whether or not the person is legally able to carry a gun.

“Anytime there’s a weapon involved it does increase the danger with that call,” he says.

Correction: This story has been updated to clarify Carno’s comments about the accuracy of FASTER course members, and to indicate the number of student’s in FASTER’s first course was 17, not 12.