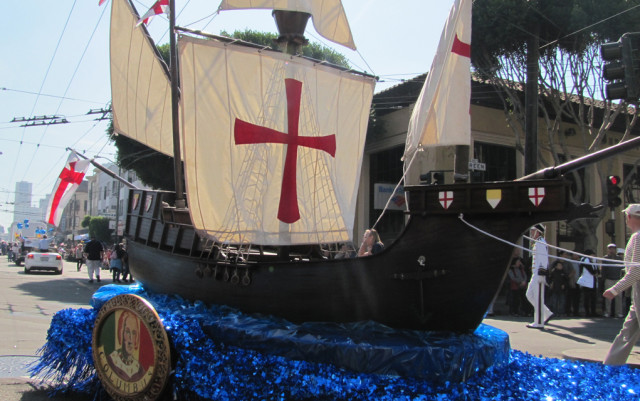 Rep. Joe Salazar will introduce a bill in the state General Assembly this session that would change Columbus Day to Indigenous Peoples’ Day in Colorado.

The bill’s draft has already been made available by Salazar, and the move comes months after the Denver City Council voted in October to rename and rededicate the holiday to American Indian and populations indigenous to the country. Alaska, Hawaii, Oregon and South Dakota do not recognize the holiday, and Alaska voted to rename the day Indigenous Peoples’ Day last October, just as Salazar prompts Colorado to do.

In the bill, Salazar outlines the story of Christopher Columbus’s first journey to the Americas in 1492, using select primary sources to highlight the brutality with which Columbus met indigenous populations.

Quoting a journal of Bartolomé de las Casas, a Spanish priest on Columbus’ initial voyage, Salazar notes in the bill that Columbus landed on the island of Hispaniola, which is now home to Haiti and the Dominican Republic, and upon arrival, Columbus’ men “[acted] like ravening beasts, killing, terrorizing, afflicting, torturing, and destroying the native peoples.”

De las Casas went on to document that the conquest was an effort to turn the native population into Christians, and the bill Salazar will introduce codifies the recognition of certain aspects of the greater story regarding Columbus Day: That indigenous people “have overcome such cruelty, exploitation and inhumanity,” as was inflicted by European governments; that other states have renamed Columbus Day; and that Colorado still recognizes the contributions of Italian- and Spanish-American people.

As anyone who’s attended the Columbus Day parade in Denver, or in bigger celebrations in New York, Pittsburgh, San Francisco and elsewhere, knows the day has become a celebration of community for local Italian-American (and some Spanish-American) populations. Though commissioned for exploration by the Spanish government, Columbus was born in Genoa, Italy, and Italian-American populations have been using the day to celebrate their heritage.

In fact, Colorado was the first state to recognize Columbus Day. In light of discrimination and violence heaped on the first waves of Italian-Americans, Angelo Noce, an Italian immigrant who ran the first Italian language newspaper in Colorado, worked to institute a holiday that would highlight the fact that, outside of indigenous people, the country was made up entirely of immigrants. In 1907, Noce successfully convinced lawmakers — namely the state’s only Latino legislator, Casimiro Barela — to make the holiday official. As more Italians immigrated to the U.S. in the early 20th century, more states adopted the holiday, and in 1937, Franklin Delano Roosevelt declared Oct. 12 officially as Columbus Day. Today, the holiday is celebrated throughout the Americas and in select European countries.

Figuring out a compromise between honoring the culture of Italian-Americans and other immigrants, while also not honoring a person who is responsible for the mass murder and enslavement of the Americas’ first people is not cut and dried. Though Salazar has said publicly that there are plenty of other people of Italian heritage to honor in lieu of Columbus, advocates on both sides of the issue are vociferous in the support of their causes, with compromise far away.

The American Indian Movement (AIM) has long advocated for the removal of Columbus Day in Colorado and nationally.

“To our Italian-American friends, we say that to celebrate the legacy of this murderer is an affront to all Indian peoples, and others who truly understand this history,” the group wrote in a statement. “It would be the same as if German people would celebrate and glorify Adolf Hitler and the rise of fascism, and the Nazi holocaust by holding parades through the Jewish communities of America and throughout the world.”

“I looked for a middle ground for about 15-16 years,” says George Vendegnia with the Italian American Commission of Social Justice. “Over time, [AIM] didn’t get their way, and they’d throw [fake] blood on the street [parade], and that’s not what it’s all about. [They] are taking our freedom of speech and right to gather away from us.”

Vendegnia says the celebration of Columbus Day in Denver is intended to be much more inclusive than an ethnic celebration for Italian-Americans, and that the original impetus for the holiday — to unite all Americans — should be foremost.

“We’re celebrating the discovery of America. Whether or not you want to say Columbus discovered it, Amerigo Vespucci, anybody, that’s what we’re celebrating, because we’re Americans first,” Vendegnia says. “It’s a two-hour parade, if that; I mean, it’s nothing.

“Anybody can interpret it any way,” he says. “They [AIM] have the right to voice that opinion, but we also have our opinion.”