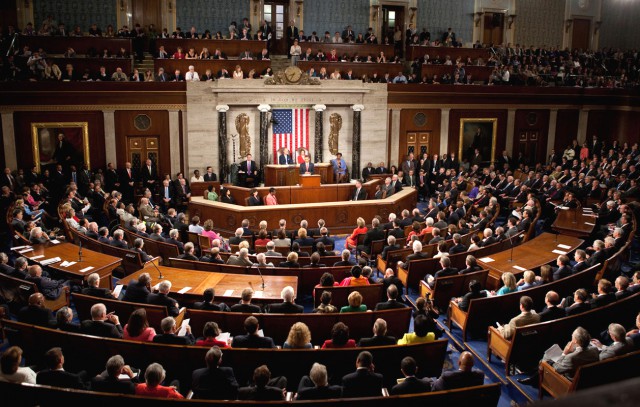 WASHINGTON — Once again, Congress has delayed until
the last minute approving funds to keep the federal government running.
And once again, lawmakers are giving their constituents more reasons to
be disgusted and alienated.

The public already
holds a dismal view of Congress. The summer’s debt-limit dispute shook
public confidence on a scale like the 9/11 attacks and Hurricane
Katrina, GOP pollster William McInturff found. He said that consequent
voter anger could result in “unstable and unpredictable political
outcomes.”

Now the lawmakers are at it again.

The
latest Capitol Hill clash involves a tiny piece of the federal budget,
replenishing the government’s disaster aid fund. Most Republicans wanted
any new money given to that fund offset by other budget cuts; Democrats
said such offsets are not needed for emergencies.

The
fund had been expected to be depleted by Tuesday, but on Monday
officials said it probably has enough money to last through this fiscal
year, which ends Friday. That may end the impasse.

The
disaster-relief fund is attached to ordinary funding legislation that
would keep the government running through Nov. 18. The bill has to be
passed by Oct. 1, the start of the new fiscal year, or federal
operations could begin shutting down. It’s expected to pass by Friday,
but the back and forth over whether to give extra money this week for
disaster relief had lawmakers at partisan loggerheads again.

If
this sounds like a rerun of last spring’s shutdown showdown, and the
summer’s debt-ceiling brinkmanship, it was. And there’s probably more to
come later this fall.

“This problem is probably
not going to get straightened out until 2012,” said Ross Baker,
professor of political science at Rutgers University.

Most politicians, said the experts, are likely to see an angry electorate next year.

“Congress for some time
has been seen as a discordant voice,” said Lee Miringoff, director of
the Marist Institute for Public Opinion. That’s been especially true
since this summer, when the showdown over raising the nation’s debt
limit was resolved hours before the government faced default on its debt
for the first time in history.

The latest chapter
in the stalemate saga began last week. The House of Representatives was
expected to easily pass the stopgap funding, which included $3.65
billion for disaster aid. About $1.5 billion was offset by cutting funds
for an auto research program popular with many Democrats.

Republicans
hold 242 seats, with 218 needed for a majority. Republicans, figuring
they would lose a few dozen conservatives who wanted further spending
cuts, had counted on Democrats to pass the funding measure.

Despite
strong pleas to stick with the party line, 48 Republicans sided with
Democrats in opposition, and the bill was defeated. Friday, the House
passed a tweaked version that cut another $100 million. The Senate was
poised to pass a different measure Monday evening, and somehow both
chambers must pass the same measure by Saturday or the government will
begin shutting down.

Both sides insisted they were reflecting the public mood.

Rebellious
Republicans, many elected with support of the conservative tea party
movement, said they had been sent to Washington to cut spending
dramatically, not to fashion compromises with Democrats.

“The
dynamic now in the Republican caucus is from the ground up, rather than
the top down,” said Michael Franc, vice president of government studies
at the Heritage Foundation, a conservative policy-research center in
Washington.

Low approval ratings don’t bother
them, Franc said. “They were elected to cut the size of government, and
they see the low ratings as reflecting voter unease with the direction
of the country, not with the members,” he said.

Democrats, too, insist they’re on the right political track.

“We
strongly oppose the notion that efforts to help Americans rebuild their
lives after floods, hurricanes, wildfires and other natural disasters
should be put on hold until Congress can agree on offsetting reductions
in spending,” said Rep. Norm Dicks of Washington state, the top Democrat
on the Appropriations Committee.

Staying obstinate could be a “dangerous game,” said Burdett Loomis, professor of political science at the University of Kansas.

“The
GOP in 2010 campaigned against the Congress, so (the institution’s) low
ratings were a boon,” he said. “Now, however, they’ve chosen
destructive tactics because hostage-holding has worked.”

“At some point policy-based hostage taking has to be challenged, and this seems like a favorable time,” Loomis said.

If
the current stopgap funding measure passes, another must be approved by
Nov. 18. Congress has until Dec. 23 to act on the bipartisan
supercommittee seeking ways to cut at least $1.2 trillion from deficits
over the next decade, or automatic cuts will be triggered.

“We
don’t know how this will translate into voting behavior next year,”
said Baker of Rutgers, “but if it’s a plague on both houses, it’ll look
like 2010 again — no consistent narrative.”