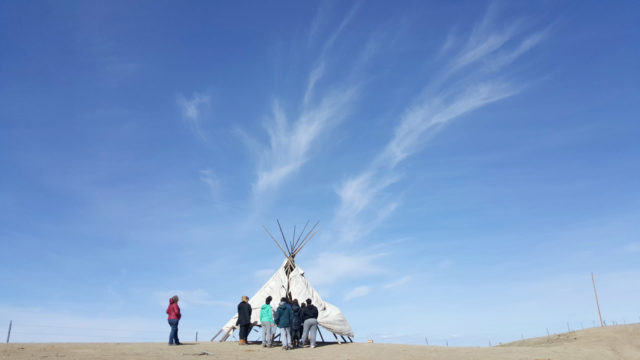 When the floods came to Pine Ridge Reservation a year ago, Doreen Two Bulls and her family were stranded for two weeks. Roads were washed out as a heavy snowfall turned into surging runoff, filling empty creek beds. Two Bulls lives with 13 family members in two-bedroom house a couple miles off the main highway in the small community of Payabya, about 10 miles north of the town of Pine Ridge. The family is used to stocking up on essentials, she says, making sure they have enough firewood, food and medicine, but last year they started running low on supplies as they waited for help to come.

Now there’s a confirmed case of COVID-19 on the reservation. Although tribal leadership is doing all it can to prevent the spread of the disease — locking down all 3,500 square miles and banishing the person who has it — Two Bulls says she’s worried about her community, which already has such sparse resources.

“They say they’re stimulus funds coming in for COVID-19, but FEMA gave us money for the floods last year and we haven’t seen any of it,” she says. “We’re one of the last communities that’s ever helped.”

The Pine Ridge Reservation, home to the Oglala Sioux Tribe and just 350 miles from Denver, encompasses some of the poorest counties in the nation. Two Bulls worries about the unemployed families, as half of the reservation’s population lives below the poverty line. Previous to the coronavirus, the unemployment rate on Pine Ridge was approximately 17%, according to the U.S. Census Bureau, although some estimates say it’s much higher, as much as 75-80%. She’s also worried about the elderly people in her community, those who may not have internet or even radio to find out how to get supplies. And what about the kids who are now at home instead of in school? According to the Census Bureau, about 60% of Pine Ridge has a computer at home, less than half have access to internet. Plus, the community has also long battled with alcoholism, teen suicide and other health problems. It has the shortest life expectancy in the U.S.

Needless to say, the coronavirus only amplifies the systemic inequalities in basic services, housing and health care that have long plagued Pine Ridge and American Indian communities across the country.

“You’ve got a lot of people living in extremely tight quarters. The ability to sanitize is difficult, there are people living without running water. The health care system isn’t great, you’ve got an elderly population, typically speaking, less healthy,” says Dave Ventimiglia, executive director of Tipi Raisers, a Lakewood-based nonprofit that supports Pine Ridge through donations, supply deliveries and service trips. “There’s clearly a great deal of justifiable fear around now that it’s here how quickly is it going to spread?”

Overall, South Dakota reports 988 positive cases of COVID-19 as of April 14, with six deaths in the state. Meanwhile the governor has refused to issue statewide stay-at-home orders, despite having one of the largest clusters of the disease at a pork processing plant in Sioux Falls where more than 300 employees have tested positive.

Plus, the disease is already sweeping its way through other American Indian reservations and communities. According to a database compiled by Indian Country Today, there are a total of 1,148 confirmed cases and 44 deaths in American Indian communities across the country as of April 14. The Navajo Nation is being hit particularly hard, with confirmed cases per capita just behind New York and New Jersey.  Although the federal stimulus bill promises $10 billion to tribes across the country, it’s unclear when the help will come. Even then, a little more than $1 billion of the funds will go to the federal Indian Health Service, which has historically failed to provide even the minimum standard of care, according to the Wall Street Journal. The pandemic only compounds all of this, as shortages of doctors and supplies could have grave consequences.

“We’re lacking time here because it is going to hit our people,” Two Bulls says. “We should have been on top of it from the beginning.”

The first case of COVID-19 was confirmed on Pine Ridge on April 7 — a female teacher at Red Cloud Indian School, a private Jesuit institution. According to Buzzfeed News, the woman and her husband had been traveling to California for a medical procedure but only made it as far as Denver before finding out the surgery was canceled. They returned to the reservation on March 27 and immediately quarantined themselves in their home at the school. In a statement, the president of the school says the couple remained in their house and had no contact with anyone. Groceries and other supplies were left at their door. A week later, on April 3, the employee started experiencing respiratory distress and went to the hospital. Eventually, she was tested and taken to a hospital in Rapid City.

On Wednesday, April 8, the Oglala Sioux Tribal Council voted to banish the couple from the reservation. President Julian Bear Runner voted in favor, breaking a 9-9 deadlock. In a radio interview, Bear Runner said the decision was a difficult one, but explained the decision was made “to protect our health and our general welfare.” The move has proven controversial on social media as some folks approve, while many others, including Two Bulls, say it’s not in the spirit of the tribe to be so unwelcoming.

“The tribe is doing their best to stay on top of it and balance the needs of freedom and independence and they’re a proud people,” Ventimiglia says. “But also recognizing [the seriousness of the risk].”

Spring is usually a busy time for Tipi Raisers, but most everything has been canceled through at least April.

At the end of March, Ventimiglia says, Tipi Raisers dropped off a load of supplies, food, firewood and 53 beds to the reservation line where they were met by tribal members, everyone wearing masks and gloves.

“It’s just really odd. There were tribal members that we’ve known for years and we couldn’t shake hands or hug. We could only wave and talk from far away,” he says. “It is what it is right now. Supplies need to keep going, people need to get fed.”

That was before the entire reservation was locked own, before the first case was confirmed.

Still, Tipi Raisers is providing basic supplies — food, firewood, hygiene and sanitation — to 32 families spread throughout eight different communities on the reservation for at least the next four weeks.

“That’s obviously a drop in the bucket,” Ventimiglia says. “You could come up with a list in each of those communities of 50 to 100 needy families.”

The organization has hired tribal members in Rapid City to purchase the goods off of the reservation, then transport it to the border. From there, another tribal member picks up the supplies and takes them to a warehouse to be sprayed down and quarantined for 24 hours. Then, a driver delivers the supplies to each home, leaving them on the porch, knocking and then driving away. One of the families Tipi Raisers is helping is multigenerational with 17 people in one house.

“If coronavirus hits that home it’s in real trouble,” Ventimiglia says. “Some of us have that ability if someone gets sick, have them be in a room that no one else goes into. On the reservation that’s much more difficult.”

Mary Weasel Bear, who volunteers with Tipi Raisers, lives with her mom, six sisters and their families in a cluster of houses and trailers about a mile and a half off the main highway. The main house is the only one with running water. But, she says, they’re more fortunate than a lot of folks — a lot of people live without any running water at all. Weasel Bear says she hasn’t really left home in a few weeks, as only one family member ventures out to get groceries. Several of her family members have diabetes, which puts them at higher risk of contracting a serious case of COVID-19. And if one person gets it, they could bring it back to the entire family.

“The good thing about it is that it’s bringing us closer. Before this, everybody was coming and going and now we actually get to sit down and have a meal and visit, because we have time,” Weasel Bear says. “The bad thing about it is that if one of us was to go to town, or go somewhere for their job, that anxiety, that concern about picking it up is always there.”

In response to the pandemic, tribal leadership has imposed strict measures. They instituted a curfew on April 1, then a border-monitoring ordinance on April 3, followed by a complete lockdown on April 7, preventing people from leaving the reservation for non-essential reasons. That includes grocery shopping off the reservation, which is significantly cheaper, according to Two Bulls and Weasel Bear.

The lockdown was briefly lifted on April 10 and 11, however, to allow folks to buy groceries off the reservation with their federal benefits, which caused huge crowds to rush big box stores in Rapid City, North Dakota, and Chadron, Nebraska.

“We’re just taking a risk every time we go out,” Weasel Bear says.

When Two Bulls got to the Walmart in Chadron on Friday, she says, there were about 70 people in line stretching back “all the way to the TVs.” It was chaos, she says, people risking their lives to get affordable supplies.

“At almost 80 years old, my mom is sitting in that line in her wheelchair with a mask,” she says, with obvious concern in her voice. “I can’t tell my mom not to go because she needed those essentials.”

Following the temporary lift, the reservation is now back in full lockdown until April 26. Anyone traveling during this time needs to have a tribal badge, the ordinance says. While vendors will be able to enter the reservation to resupply the few stores, all non-residents will be turned away. Two Bulls says it’s normal to see folks hanging out in the street or selling their goods on the side of the road, some people even make their money that way or rely on food and kindness from passersby to survive. But now reservation police are driving around telling people to get inside.

“I know our tribal council members try to do as much as they can,” Two Bull says, “but they get overwhelmed with the need that we have.”

She finds hope in the spirituality of her tribe, though, in the stories of grandmas and grandpas, and the resiliency of her people to live off the land and survive for centuries.

Within the last week, Two Bulls says she’s run into four different medicine men, all of whom shook her hand and gave her a hug. One told her he’d been up in a cave in the Black Hills praying for the people. Another went up a mountain to do the same. And one of them told her: “We’ve got our Lakota ways. We’re going to be OK. Don’t join that panic. We’ve been through worse,” she says. “As Indians we always say we’ve been through worse.”