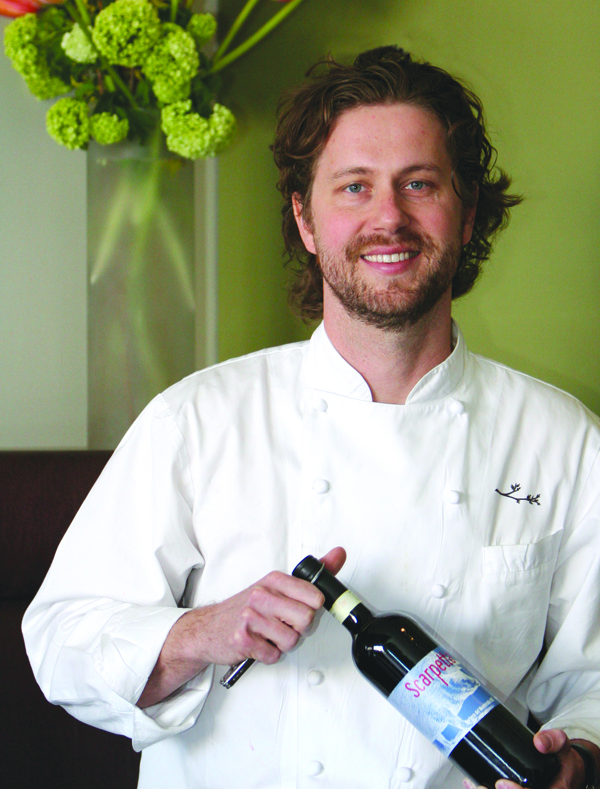 “Looking back, it was totally ridiculous behavior for a business decision,” says Frasca co-owner Bobby Stuckey of coming to Boulder in 2004 to open a restaurant.

Stuckey and partner Chef Lachlan Mackinnon- Patterson had built sterling reputations at Napa’s storied French Laundry, one of the best restaurants on the planet.

“It would have been easier to open in San Francisco,” Stuckey explains between sips of locally roasted Boxcar espresso at his new CaffÃ¨. Also, rent in Boulder was 20 percent more than in San Francisco’s Marina District.

As culinary scenes go, Boulder’s lagged. Stuckey’s early conversations with Farmers’ Market growers revealed few chefs relied on local fruits and vegetables. “Back-breaking and hard,” is how Chef Bradford Heap of Salt Bistro and Colterra describes his past efforts to get local produce.

Back then, he was shopper, loader and delivery driver, dealing with farmers and ranchers leery of supplying restaurants.

Fast-forward to today, and Boulder has successfully morphed from culinary naÃ¯f to Bon Appetit magazine’s “America’s Foodiest Town.” Communities smaller than 250,000 are eligible for this honor, which is based on quality of restaurants, farms and farmers markets, food media, local food products and consumers. But the magazine’s criteria do not adequately explain why Boulder earned this accolade.

Quality of life, an open-minded, adventurous and well-informed population, as well as a collaborative community of farmers and restaurateurs are Boulder’s main strengths in establishing a town of foodies.

Social and environmental awareness have also always permeated Boulder’s collective consciousness, and these will significantly shape things to come.

“I sometimes have to grind it out and work a month or two with one day off,” Stuckey reveals, adding that the fact that he can easily go out for a run or a bike ride here takes the edge off significantly. “That’s not something you can do in [San Francisco’s] Noe Valley.”

While Boulder may not be blessed with the geography or diversity of New York or New Orleans, it does possess sophisticated palates willing to try new things. Stuckey pegs Boulder as an open-minded place: “It’s a community of people who enjoy reading and travel.”

“One thing I know is this town really supports locally owned restaurants,” she says, pointing out that local diners like taking chances. “We have an edgy, adventurous soul.”

Paul Cure, a self-described “farmer’s husband,” operates Cure Organic Farm with his wife, Anne. He believes Boulder has become increasingly savvy when it comes to food. He says terms like community-supported agriculture (CSA) and the concept of local farm-to-table dining are now more prevalent in mainstream culture. Citing the popularity of Internet farm games, Cure also points to an increasing interest in agricultural lifestyles.

“It’s a return to hands-on living in a virtual world,” he says.

“People want to know where their food is coming from,” he says. “They care about what they put in their mouth.”

Carol Carlson chairs the Boulder chapter of Slow Food USA, which works to increase awareness around food. While some operate under the misconception that the Slow Food movement is an elite supper club, Carlson clarifies her organization’s role.

“It’s about education through awareness; every Slow Food event has an educational component to it,” she says.

Carlson’s seen the organization grow and become more activist, and its rise parallels the trend towards consumers wanting to better understand their food. She describes the organization as “waking people up through taste, meeting farmers, discussing political issues and promoting improved school lunches.” The recent Honor Thy Farmer Slow Food event and chapter meeting is one example of a gathering where growers were able to hold dialogues with consumers.

Dialogue and collaboration among chefs and farmers is another strength underlying Boulder’s foodie reputation. Veronica Volny, co-owner of Meadow Lark Farm, credits one particular local chef with helping to get her farm dinners off the ground.

“Hugo Matheson from The Kitchen was a great mentor,” she says.

When Volny and partners were developing their school bus, kitchen-on-the-farm concept, Matheson helped them master the intricacies of the wood-burning grill. The Cures, who also supply Flagstaff House, The Kitchen and Frasca, also offered advice.

Paul Cure asks, “How can you have a competition with only 100,000 people and a 10-acre farm?” Mike Munson of Munson Farms, whose clients include Jax, Radda, Flagstaff House and the Cork, concurs that local farming is collegial.

“It’s not cutthroat; if there’s competition, it’s about who has the best squash,” he says.

Derichsweiler also has a cooperative vision for the latest venture with her partners, the Walnut-a-gogo food truck that serves breakfast and lunch items. Of course, this vision will have to wait until city government finalizes the regulations for these mobile eateries.

‘People want to know where their food is coming from,’ says Chef Bradford Heap of Salt Bistro and Colterra. ‘They care about what they put in their mouth.’

Food trucks are part of the local trend to make quality victuals affordable and not something just for special occasions. New endeavors, such as Frasca’s Pizzeria Locale and neighboring CaffÃ¨, are also part of this movement, promoting high quality and service at a reasonable price. Diners can experiment at these venues before moving on to pricier, more exotic fare. As Stuckey puts it, “The new stuff lets people get their toes wet.”

Wetting toes may well be part of Will Frischkorn’s plan for Cured, a brick-walled East End Pearl Street food shop slated to open in late spring. A retired pro cyclist for the Boulder-based Garmin-Slipstream team, his credentials include a second place stage win in the 2008 Tour de France. Now he’s shifting his focus to selling wine, cheese and cured meats with fiancée Coral Ferguson, a graphic designer.

“Cured will feature great products that aren’t expensive,” promises Frischkorn. Although he’s coming off two years of living in Spain, most of the products will come from the good old USA. “It’s focused on America, the terroir that is home.”

Consequently, many items will come from small local growers such as Isabelle Farms and Growing Gardens. The offerings will be inspired by Frischkorn’s “standard meal of salad, chunks of cheese, salumi, bread and wine six nights a week.”

Salumi will come from Denver’s Mondo Vecchio, and Boulder’s Boxcar Coffee will be roasting beans on site. He anticipates having the bulk of wine selections falling into a reasonable $8 to $30 range. The passion that propelled him to the front of the peloton is evident when he describes his vision.

“It’s about taking something you love and getting everyone excited about it,” he says.

Some may attribute Boulder’s foodie stature to the influx of relative 21st-century newcomers such as Frischkorn, Matheson and Black Cat’s Eric Skokan. But long-term habitués, like Dave Query (whose Jax Fish House employed Top Chef Hosea Rosenberg), the Monettes of Flagstaff House and Radek Czerny of L’Atelier, have also played important roles.

Two other leaders in the local culinary scene are Heap and Mike Munson of Munson Farms. Both have deep roots here, and the parallels between their paths shed light on how Boulder got to be where it is today.

Heap moved to Table Mesa when he was 1 year old. He started cooking at the old Elephant Bar in 1986, before going on to the Boulder Country Club, and then the Culinary Institute of America in Hyde Park, N.Y.

“I left for culinary school,” he says, “with the goal of opening a place in Boulder.”

Munson’s parents started their namesake farm in 1976, and today he runs it with his brother Chris. Father Bob grew up as an Illinois farm boy who later worked as an engineer for Ball Aerospace. He was familiar with raising corn, which became one of the farm’s most sought-after crops. Mike left Boulder to see the world, including spending time living in Washington, D.C., and Japan.

Heap’s route back to Boulder was circuitous, with stops in San Francisco, Los Angeles and France, where he studied under such masters as Alain Ducasse. France gave him a fresh perspective on menu development. Rather than initially planning a meal before seeing what’s available for the day, explains Heap, “the French go to market and see what’s good, what’s fresh.”

Heap returned to Boulder in 1992, and eventually realized his dream of opening his own restaurant, Colterra. Today some 15 different farms and ranches supply his restaurants, and fortunately for Heap, they now deliver.

He admits that embracing an ingredient-driven bill of fare presents challenges.

“You need to be quick on your feet with menu-writing,” he says. “But it’s worth it. The quality with local farmers is head and shoulders above the rest.”

Munson came back to Colorado, and he’s seen significant changes since his return. In the past six years, he’s witnessed how area restaurants have embraced the farm-to-table movement, promoting local consumption of produce to promote sustainability. Restaurant needs also drive decisions about what to grow.

“We go out of our way to get heirloom pumpkin and squash,” he says, explaining that Colorado has a good climate for these items, and that they are popular with restaurants, as they have a longer growing season. “They like it in the fall. It’s hearty and decorative produce.”

Heap’s desire for putting healthier food on the table is driven by an eye on the future. His work includes collaborating with Chef Ann Cooper of the Boulder Valley School District to improve school lunches, including giving cooking demonstrations at Southern Hills Middle School. He also wants his family to understand that “Daddy supports organic farmers, not factory farmers,” he says, “and I’m teaching kids how to eat healthy.”

Boulderites are never content to rest on their laurels, and the question remains: What’s next for this food-crazy town? Munson is optimistic about the future, saying, “I can’t see how Boulder can’t keep doing well.”

Meadow Lark’s Volny identifies a vital concern: “We need to continue to grow support for farmers in the community.”

According to Cure, healthy food shouldn’t be a luxury. “We need to make it accessible to young and old, the affluent and less fortunate,” he says.

His farm works towards this goal by offering such programs as a kids’ camp, an elder produce-share program and school tours.

Carlson’s perspective mirrors Cure’s, and her future vision revolves around distribution. Her ongoing concerns include getting food to economically disadvantaged residents through mechanisms such as a low-income CSA and teaching young parents how to cook fresh ingredients.

“Operators need to look at ourselves and ask how we can improve,” says Stuckey. “We don’t want this to be the pinnacle.”

Can local businesses survive the winter?

Shifting the focus of human rights in Boulder