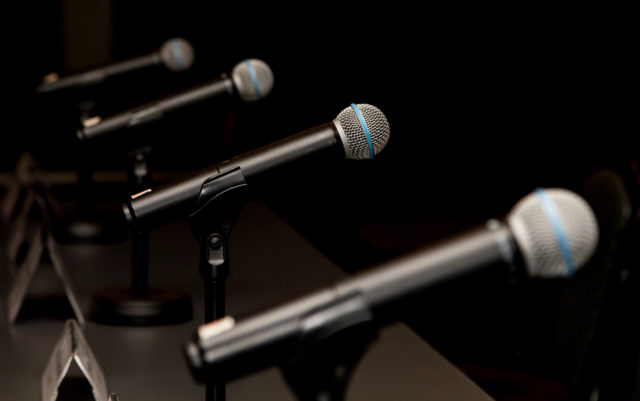 As the first month of 2020 comes to an end, primary politics in this election year are just heating up. While the Democratic presidential primary takes the national spotlight, here in Colorado eight Democratic candidates are vying to replace Republican Senator Cory Gardner, part of a national effort by Democrats to regain control of the Senate, after winning back the House in the 2018 midterms.

The breadth and number of candidates has fluctuated over the last year and there still could be additions (and possibly drop-outs), as the deadline to file with the Secretary of State’s office isn’t until March 17. However, all eight current contenders for the Democratic nomination in the Senate race are set to convene in Longmont on Jan. 26 at a town hall event presented by Longmont Latinx Voice, a recently formed organization with a mission to increase Latinx voter registration and engagement, while helping to resolve Latinx issues in the Longmont community.

“We don’t really get many opportunities, if any, to be able to hear from every single candidate running for the Democratic nomination for the U.S. Senate on these particular issues,” says event moderator Nick Lopez. “And so this certainly will give folks a platform who maybe are first-time candidates or who haven’t traditionally had to reach out to the Latinx community to build the bridge with our community and allow us to better understand how they will serve our needs and be the best representative for us in the United States Senate.”

Lopez grew up in Longmont, and went on to study law and work for the Colorado Attorney General’s Office. He now works for the state of Vermont, but still has deep ties to the Latinx community in Longmont and often returns to visit family and friends.

The event is especially pertinent right now, Lopez says, considering the growing influence of Latinx voters across the country and here in Colorado. Voter turnout in the 2018 midterm election hit a record high overall, with the number of Latinx voters almost doubling compared to the 2014 midterms, according to the Pew Research Center. What’s more, Pew expects Hispanic voters to be the second largest voting contingency in the 2020 election, surpassing the number of eligible black voters. All together, Pew expects about a third of the voters in 2020 to be nonwhite, up from about a quarter at the turn of the century.

“Latinos now hold a significant amount of electoral and voting power in this country. And all evidence suggests that over the next 20 to 30 years, the Latino population will continue to grow,” Lopez says. “And the power dynamics that Latinos have in electoral races and in politics is going to continue to shift.”

In Colorado, members of the Latinx community make up about 20% of the overall state population, with the majority having been born here, according to the University of Denver’s Latino Leadership Institute and the Latino Data Project. When it comes to registered voters, the Latinx community comprises approximately 13% of those filling out ballots in Colorado. Overall, Latinx voters in the state narrowly favor Democratic candidates, with an increasing percentage registering Independent, especially millennials. These voters could significantly alter the Democratic primary this year, as a 2016 law now allows unaffiliated voters to choose whether or not they want to vote in a primary for a specific party without officially registering with that party. Given that no one is challenging incumbent Sen. Gardner on the Republican side, it’s likely a large percentage of unaffiliated voters will cast ballots in the Democratic primary scheduled for June 30.

“It’s clear from the large field that there is excitement in the Democratic Party,” said Longmont Latnix Voice founder Victor Vela in a press release. “But the candidates will need to go through the Latino community here in Colorado in order to secure a primary victory.”

The Democratic candidates (see sidebar for more info) are competing to challenge current Colorado Sen. Gardner, who is up for reelection after narrowly winning the seat in 2014 by some 50,000 votes. Currently, Gardner is considered by many to be the most vulnerable Republican senator in the country, seeking to win in a state that Hilary Clinton won by five points in 2016. What’s more, Democrats swept statewide elections in the 2018 midterms. They also flipped one congressional district — the election of Jason Crow over incumbent Mike Coffman — contributing to the national effort to win back the House.

Meanwhile Gardner has been catching flack for his lack of public appearances, scheduling no town hall event in the last two years, a move that many see as a way to avoid answering questions about his allegiance to Trump. Although Gardner didn’t endorse Trump in 2016, he’s increasingly aligned himself with the president, if not directly at least with his policies.

According to a voting record tracker at FiveThirtyEight, Gardner has voted in accordance with Trump’s policies 89.3% of the time.

He’s confirmed the majority of Trump’s nominees, including controversial figures like Supreme Court Justice Brett Kavanaugh and Secretary of the Interior David Bernhardt. He voted to repeal the Affordable Care Act and roll back the EPA’s methane emissions standards, as well as blocked an attempt to quash Trump’s emergency funding of the border wall. Gardner differed from the president when it came to providing disaster aid to Puerto Rico, passing the federal budget without funding for the border wall, imposing sanctions on Russia, Iran and North Korea, and a bipartisan immigration proposal back in 2018.

As the impeachment trial starts in the Senate, many have criticized his refusal to answer questions or comment about the president’s behavior or how he’s inclined to vote as the process plays out. Meanwhile back home, Gardner has not been known for his voter engagement across the state.

“There is frustration that Senator Gardner has not been as accessible to the community at large and specifically the Latinx population,” Lopez says. However, the Longmont Latinx Voice event won’t significantly focus on Gardner, he says. Rather, Lopez will be asking questions centered around policies more than politics.

“Now certainly I expect that the candidates will indicate how their policy positions will be distinct from Senator Gardner,” he says, “but given that this is a Democratic primary, we really want to get a sense as to how each of these candidates stack up against each other and how their policies fit into the larger picture.”

Lopez says his questions are designed to draw attention to the issues the Latinx community cares most about — national issues that have local impact as well as local issues that have national reach, all of which leave many living in an environment of uncertainty. But don’t expect a conversation only revolving around immigration reform, he says.

“Fair or not, many national politicians and political pundits think that the only issues that the Latinx community cares about are immigration and crime,” Lopez says. “Those are obviously very important issues to us, but there are so many other issues that impact us too.”

The forum will cover wide-ranging topics such as affordable housing, disparity in terms of both wages and wealth, K-12 education as well as higher ed, affordability and access to health care, transportation and policing.

“All these issues are not only important for the broader public at large, which is why we hope everybody will be interested in attending this event, but are specifically impacting the lives of Latinos at the local and national level,” Lopez says.

Climate change and energy development will also be topics of discussion, as the Latinx community is often left out of the conversation with politicians and environmental groups alike, despite the fact that “our communities are feeling and will feel the effects of climate change in many times disproportionately or more quickly than others,” Lopez says.

“We also intend to discuss discrimination generally, whether it’s the tremendous wage disparity that exists for Latinas working and living in Colorado to overt and passive discrimination that still resides in many of our communities, due in large part to the discourse we see at the national level.”

The forum will be conducted in English with simultaneous interpretation in Spanish via headsets.

Regardless of how the candidates answer, a large component of the event is increasing voter engagement within the Latinx community. Using the mantra, “Su voto es su voz,” or, “Your vote is your voice,” the hope is that come June, and then November, more of the Latinx community than ever turn out to vote.

As Lopez says, “The one way that we can make sure that Latinx issues are addressed and people have the opportunity to make sure their voice is heard is by going to the ballot box.”

Diana Bray
Mother of four Diana Bray has been a climate justice activist since 2006, protesting against increased oil and gas development in Colorado and Australia. She is also a clinical psychologist. dianaforcolorado.com

Lorena Garcia
A seventh-generation Colorado native, Lorena Garcia is a veteran activist and organizer with a career in nonprofit administration. She currently is executive director at the Colorado Statewide Parent Coalition. lorenaforsenate.com

John Hickenlooper
The former mayor of Denver and two-term governor of Colorado. He joined the Colorado Senate race after suspending his presidential campaign. hickenlooper.com

Andrew Romanoff
Former speaker of the state House of Representatives Andrew Romanoff was previously elected to four terms in District 6, representing East Denver. Most recently, he was the president and CEO of Mental Health Colorado. andrewromanoff.com

Stephany Rose Spaulding
A Baptist pastor and professor of women’s and ethnic studies at University of Colorado, Colorado Springs, Stephany Rose Spaulding was inspired to enter politics by the 2017 Women’s March. She also ran for Colorado’s 5th Congressional District in 2018. stephanyforco.com

Michelle Ferringo Warren
A longtime immigration and community advocate, Warren is the advocacy and strategic engagement director for Christian Community Development Association and a consultant with the National Immigration Forum. Her book, The Power of Proximity, Moving Beyond Awareness to Action, was published in 2017. michelleforcolorado.com

Trish Zornio
Currently a lecturer at the University of Colorado Denver, Zornio is a former lead researcher and program director at the Stanford Center for Undiagnosed Diseases. She’s currently a coordinator for the Colorado chapter of 314 Action, a nonprofit working to get more STEM professionals elected to public office, specifically U.S. Congress, and advocates for science-based policies. zornio2020.com