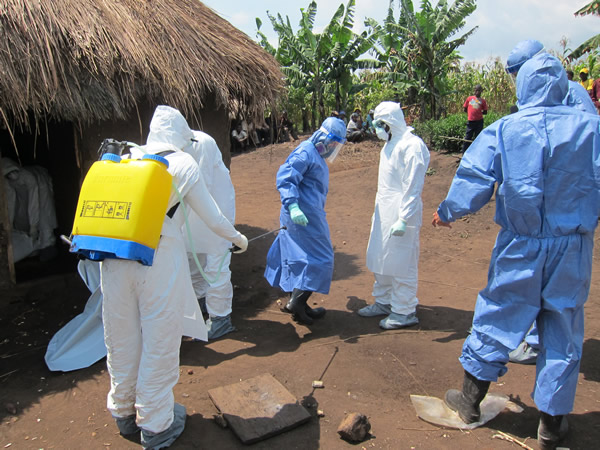 Perhaps more widespread than the outbreak of the Ebola virus is the outbreak of Ebola virus paranoia. With more than a thousand people dead, evacuations of infected foreigners to the U.S. and Europe, and an escalating number of new infections in west Africa, it’s hard to blame folks for getting a little antsy.

So what exactly is Ebola and are any of these fears justified?

Let’s start at the beginning. Ebola is a virus that attacks the immune system of humans and most other primates. Without proper medical intervention, the immune system will shut down and the organs in the body will hemorrhage and bleed out. There is no cure for Ebola, which has a 50 to 60 percent mortality rate, but proper monitoring of infected patients and treatment of symptoms has helped save lives.

Ebola can only be transferred when an infected person’s bodily fluids enter a healthy person’s body via a cut or orifice. Ebola expert Dr. Rossi A. Hassad, epidemiologist and professor at Mercy College in New York, says the virus is “deadly but hard to catch.”

Researchers are unsure of where Ebola outbreaks start in the first place, though the Centers for Disease Control (CDC) says this outbreak began when infected bats were eaten by west African communities.

“This particular virus is endemic, meaning it can be dormant and when ideal situations arise, it surfaces,” says Hassad. “Our best evidence tells us it’s in the bats, but there may be another level before the bats: the bats transmit it to larger animals that the villagers come in contact with.”

The “ideal situation” for an Ebola outbreak to occur is within the rainforest. Previous outbreaks began in the rainforests of present-day central African countries like the Democratic Republic of Congo and Uganda. But part of why the outbreak has become the worst in history is because west Africa, which is not as dense in rainforests, was not anticipating an epidemic. And, non-medical factors like deforestation in the region is believed to be a likely cause for the initial infection.

“It is believed that with deforestation and the decreasing natural habitat for these animals, they move out to where human populations are,” says Hassad.

“These outbreaks [can occur] elsewhere but when you have a virus that comes in contact with ideal factors for spread, you are going to see spread.”

Another factor contributing to the outbreak is a local mistrust of western aid workers and deeply entrenched social mores regarding death of loved ones and community members.

“In this case, you have a situation where villagers are resisting the advice and guidelines from health care workers,” says Hassad. “There’s a high level of suspicion, a widespread misbelief about illness and death. It’s perfectly understandable. You have suddenly these villagers who are seeing loved ones contracting illness and dying at a time with an influx of foreign aid workers. It is easy to see how they can make this link and in their minds make the association that this is happening because of foreign healthcare teams.”

The World Health Organization echoed that sentiment in an instructional booklet given to aid workers on how to work with communities to safely bury loved ones, saying, “If the body is prepared without giving information and support to the family and the community, they may not want to bring other family members to the health facility in the future.

They may think that if the patient dies, the body will not be returned to them.”

Traditional burial preparations in the region include washing the body of the deceased, according to the WHO, which may be covered in blood, mucous, vomit or other bodily fluids.

Another problem with washing the deceased is that their fluids are now overwhelming public sewage systems.

In the WHO instructional pamphlet, aid workers are advised to “identify a family member who has influence with the rest of the family” and to help them “understand why some practices cannot be done because they place the family or others at risk for exposure.”

Hassad says this skepticism of western aid workers is not likely to go away any time soon.

“It’s always been a problem in that part of the world where you have strong traditions and cultural beliefs,” says Hassad.

So deforestation, unsanitary burial practices, mistrust of aid workers and lack of access to medical care combine with the fact that many infected people don’t know they have the virus until a week after infection to create local spread of the disease.

“There are people who have the infection from different villages who are not diagnosed and so they are not known to have the disease, they go back to their villages and they become a source for the virus so it can spread from multiple points within the community — which means the spread can be rapid,” says Hassad.

The typical incubation period for Ebola is two to 21 days, but Hassad and others say symptoms usually manifest between eight and 10 days. That’s still long enough for a person to become infected, travel anywhere in the world and come in contact with a new community before symptoms arise. Therein lies the fear of how this endemic can become pandemic and experts aren’t sure those fears are unfounded.

Dr. Dmitri Drekonja, assistant professor of medicine at the University of Minnesota, says countries with solid infrastructure and proper medical facilities should be safe from an Ebola outbreak, but that there isn’t enough information on this particular outbreak to say for sure yet.

“What everybody’s worried about is somebody who isn’t known to have Ebola will get on an airplane, will be within the incubation period, will become ill, will get off the plane, will go home and try to sleep it off and think they’re just jetlagged, and then show up in the ER and perhaps wait for a couple hours, coughing, getting a drink from the drinking fountain, being exposed to other people, before somebody recognizes, ‘Wait a minute, here’s a guy who was in west Africa, who’s now sick and sitting in my waiting room.’ That’s the more nightmare scenario,” says Drekonja.

So far, the only cases that have been introduced to other countries outside Africa were done so intentionally: two American aid workers were flown back to the U.S. for treatment in an Atlanta facility and a Spanish priest was flown back to Spain before succumbing to the disease.

The decision to bring back those aid workers sparked heated opinions in the U.S. despite officials saying the patients would be well contained.

“I feel for them and I understand why you’d want to bring them back, but whoever is going to be the medical accompaniment on that flight is likely getting some hazard pay and wherever they’re going, this is kind of new ground for a lot of people,” says Drekonja.

“We think that if you followed the proper infection control procedures, you should be fine, but then again, here were people who knew the disease quite well, physicians and healthcare workers who are becoming ill and dying with it,” says Drekonja.

The two aid workers appear to be improving in the latest reports.

Hassad says although the risk of spread via air travel does exist, Americans need not worry about an outbreak here.

“What we say in public health is a case anywhere is a risk anywhere and although this is largely contained in west Africa, we have brisk international air travel so it’s very easy for cases to move,” says Hassad. “We have two cases here who became infected overseas and I can say with a high level of confidence, I don’t expect any spread from those two patients.

“There is no need for alarm or great concern or anxiety amongst the population here in the U.S.,” Hassad says. “We have a very sophisticated surveillance system in this country which would allow for early detection.”

(This is all to say nothing of countries that don’t have solid screening measures or adequate medical facilities, by the way.)

One case in New York City is evidence of the efficacy of screening pro cedures the U.S. has in place. Last week, a man with flu-like symptoms who had recently visited west Africa checked into Mt. Sinai Hospital out of caution that he may have had Ebola. (He didn’t.)

“Scarcely would anyone pay attention to someone with such common symptoms, but because that person travelled from a country with cases of Ebola, he was immediately checked in. So in that case the system worked,” Hassad says.

The system Hassad mentions is a three-prong surveillance framework that helps determine and potentially treat at-risk individuals. The first prong is self-reporting, where people who travel to west Africa are asked if they came in contact with anything associated with Ebola. The second prong is placing health workers at airports and other ports of entry to observe anyone travelling from the region that is exhibiting Ebola-like symptoms. The final prong is thermal scanning upon return to the U.S., where passengers’ body temperatures are scanned to check for fever.

The CDC has also issued guidelines to airline crews (including flight attendants, baggage handlers, pilots, etc.) on keeping ill passengers off planes if they show up with any symptoms related to Ebola, how to deal with passengers in-flight who might be symptomatic and how to handle baggage from the region.

And in the absolute worst-case scenario for Americans — an Ebola outbreak in the U.S. — Hassad says U.S. hospitals are “resoundingly” equipped to handle any such cases and curb the spread of the disease.

That said, the situation appears to continue to be getting worse in west Africa as governments and aid organizations rush to ebb the virus’s spread.

“This outbreak is advancing as most epidemiologists expected,” Hassad says. “It will get worse before it gets better. We are probably close to 1,800 suspected or confirmed cases and more than 50 percent have died and that fatality rate is steadily increasing.”