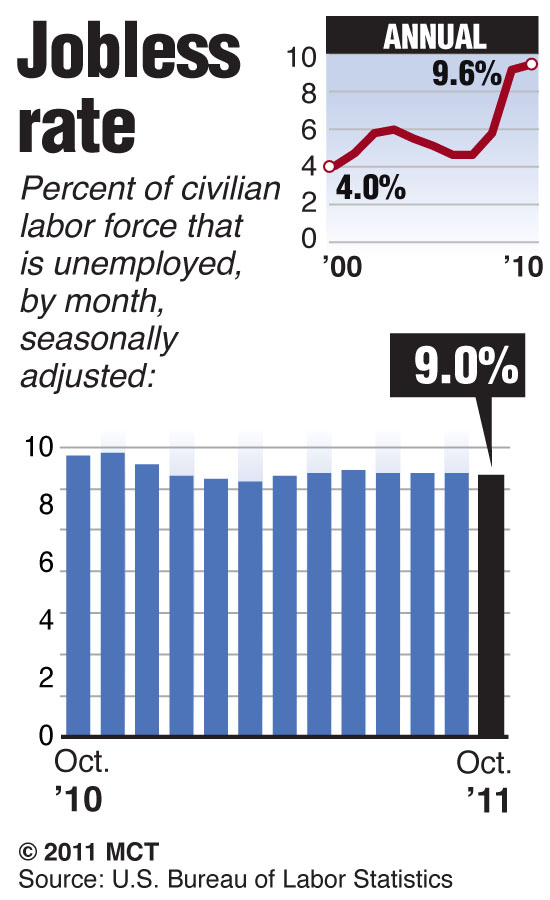 Employers added just 80,000 jobs to payrolls in
October, fewer than analysts had expected, as cuts in the government and
construction sectors continued to weigh down the national economy. The
unemployment rate dipped only slightly, to 9.0 percent from 9.1 percent
the month before, according to new data from the Bureau of Labor
Statistics.

Still, the government revised
employment figures from previous months, saying the economy had added
158,000 jobs in September, more than the 103,000 than previously
reported, and that it had gained 104,000 in August, nearly double the
number it had previously reported for that month. Those revisions
indicate that the economy is on firmer footing than it seemed to be just
a few months ago, analysts say.

“I don’t think
there’s any sign of a recession in this report,” said Ryan Sweet, senior
economist at Moody’s Analytics. “Going forward, the labor market isn’t
booming, but I don’t think there are any signs we’re going to take a
significant step back.”

Despite
the job growth, many workers say that the positions being created are
of lower quality than the ones they held before the recession. Wages and
salaries grew just 0.3 percent in the three months ending Monday and
benefits grew only 0.1%, according to the Bureau of Labor Statistics.

Kevin
Friedlander knows it. The 22-year-old Las Vegas resident got laid off
from a warehousing job last month and is scrambling to find new work to
support his wife and daughter. Each job he’s had since he got out of the
military three years ago pays less and seems more temporary than the
one before, he said.

“With almost every job I’ve
had, every day I’ve gone into work it felt like it could be my last
day,” he said. “Nothing feels secure, nothing feels stable.”