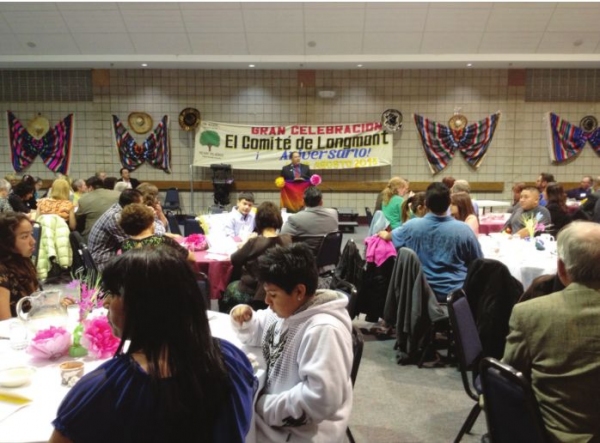 Since 1980, the nonprofit organization has worked with policy makers, schools and other organizations in Boulder County to connect the Latino community with services that promote social justice and equality in education and economic status. This year’s fundraiser will feature music from a local marimba group, a raffle for a Hawaiian kukui nut necklace, and Mexican Consul General Carlos J. Bello Roch and Rep. Jonathan Singer (D-Longmont) as guest speakers.

“I am honored in such a huge way to be asked to speak at El Comite,” says Singer. “They have done amazing work in Longmont to build bridges between the Hispanic community and the rest of the city — I hope I’ve been able to emulate that community-building at the capital.”

While the fundraiser serves primarily asa means to raise money so that El Comite can pay staff members and provide services to the community, Marta Moreno, executive director, says the event is an exciting “family” affair for the whole community.

“People really enjoy the fundraiser because we have lots of good food,” says Moreno. “Besides that, I tell people — I even tell [Boulder County District Attorney] Stan Garnett — ‘It’s familia casa, buddy — bring your Tupperware, so whatever’s left, ¡vámonos!” And there’ll be no lack of food: 3 Margaritas, Santiagos, Los Palmas, La Panda Bakery, Mariposa and Chipotle will provide dishes for the event. Leftover food will be taken to the OUR Center, which provides food for people in need.

Robert Norris, a member of El Comite’s board of directors, says the fundraising event draws community members and leaders including city council members, school board affiliates, county commissioners and members of the local sheriff ’s department.

“It’s a real community builder,” says Norris. “It’s great that we get that community support from them.”

Norris says that part of what makes El Comite effective is collaboration with a number community facilities and organizations. El Comite’s humanitarian reach extends beyond the Latino community.

“We’ve always helped anybody that came in the door,” says Norris.

As much as citizens in need seek El Comite, the organization seeks out those in need. After September’s historic flooding across the Front Range of Colorado, Norris says, many people in the Latino community didn’t know where to go for assistance.

“El Comite and the Colorado Rights Coalition got together and made sure there were bilingual events so Latinos could get their questions answered,” says Norris. “We made sure the social security folks came up here because many people had lost their cars or didn’t have driver’s licenses.”

El Comite is also acting as the new home for the St. Vrain School District’s long-running adult education program, which was terminated in the spring of 2013.

A flood victim and adult education student will speak briefly about their experiences at Saturday’s fundraiser.

Above all, the staff at El Comite sees the annual fundraiser as a way to engage the community — as a reminder that there is always someone in need.

“Community awareness is really important. I think that when you’ve been doing your hard work, fighting the good fight for as long as El Comite has, the community can sometimes get complacent,” says Bennett. “The fundraiser is a way of keeping the community aware that the need is still here.”

El Comite’s annual fundraiser, with guest speakers State Representative Jonathan Singer and the Mexican Consul, takes place 5:30-8 p.m. on Saturday, March 8, at the First Lutheran Church, 803 Third Ave., Longmont. Tickets are $60 at the door, $400 for a table that seats eight.