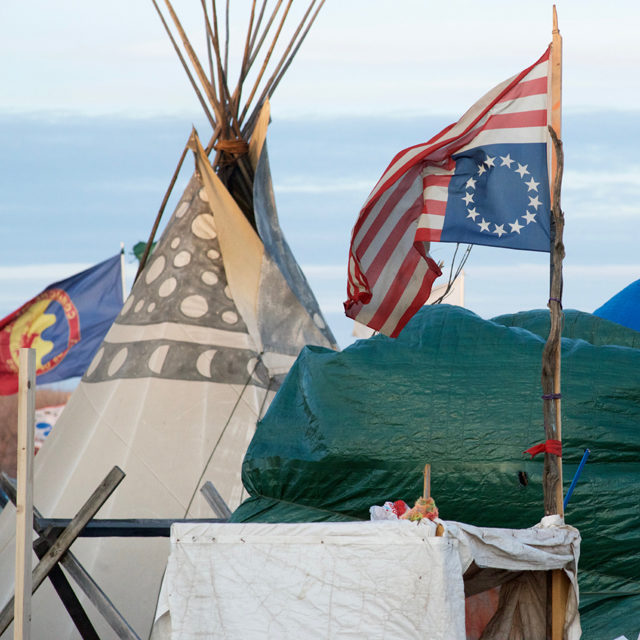 On Friday, Nov. 25, Colonel John Henderson, district commander of the U.S. Army Corps of Engineers, sent an eviction notice to several thousand people who are currently living in the Oceti Sakowin Camp just north of the Cannonball River in North Dakota. The protesters, who established the camp and call themselves “water protectors,” are living in the camp as part of their efforts to stop the completion of the Dakota Access Pipeline (DAPL) as well as to strengthen the Greater Sioux Nation’s ownership claims on the lands north of the river as granted under the 1851 Treaty of Fort Laramie.

Ownership of the 1851 Treaty lands under the Oceti Sakowin Camp — which currently covers approximately 137 acres — is also claimed by the federal government via the U.S. Army Corps of Engineers.

In his day-after-Thanksgiving eviction notice, Henderson offered a multi-pronged reason for ordering the protesters out of the camp they have now been living in for months.

“This decision is necessary to protect the general public from the violent confrontations between protesters and law enforcement officials that have occurred in this area, and to prevent death, illness, or serious injury to inhabitants of encampments due to the harsh North Dakota winter conditions. The necessary emergency, medical, and fire response services, law enforcement, or sustainable facilities to protect people from these conditions on this property cannot be provided. I do not take this action lightly, but have decided that it is required due to the concern for public safety and the fact that much of this land is leased to private persons for grazing and/or haying purposes as part of the Corps’ land management practices.”

The notice gave those in the camp until Monday, Dec. 5, to clear out.

As if drawing this federal eviction line in the sand wasn’t enough cause for concern, state officials and local law enforcement are also piling on in this dispute that has become increasingly volatile and dangerous due to the heavily militarized police force that has been assembled to stop the protesters from stopping the pipeline. Riot-gear clad officers from several states and agencies, along with mercenaries, are increasingly using violent tactics and a protester-busting arsenal that includes rubber bullets, concussion grenades, mace, teargas, armored vehicles and water hoses in freezing winter conditions.

In his order to vacate the camp, Gov. Dalrymple repeated what local Morton County Sheriff Kyle Kirchmeier has been saying for weeks. The wooden structures that protesters are building to get them through the winter are not up to local building codes and have not been inspected or properly licensed and are therefore a serious threat to public safety. The governor added that protesters should also leave because first responders will no longer be providing emergency services to anyone who stays in the Oceti Sakowin Camp.

Gov. Dalrymple says that he has the power to take such actions on federal property by way of the North Dakota Disaster Act of 1985, which lets him jump in where he sees fit in order to serve the best interest of public safety.

In addition, the governor and local law enforcement have decided that in order to protect the protesters, they will be issuing $1,000 fines to anyone bringing food, warm clothing or winterizing materials into the camp.

It seems that all this governmental concern for the protester’s safety may well be the thing that finally causes some in the camps to be injured or even die in the not too distant future of this indigenous/environmental showdown on the plains.

All this eviction talk and cut off of supplies and emergency responders seems a bit counter intuitive unless it’s viewed through the lens of military tactics, in which case this whole eviction deadline starts to make perfect sense.

Consider what the Corps is offering as a carrot to get people to leave the camp. Its eviction notice included this: “The Corps of Engineers has established a free speech zone on land south of the Cannonball River for anyone wishing to peaceably protest the Dakota Access Pipeline project.”

If you read between the lines, it seems that all of this sudden eviction pressure is really about one thing, the bridge.

There is a bridge on Highway 1806 over the Cannonball River, which sits at the southwest corner of the Oceti Sakowin Camp.

Why a bridge? We saw the value of a bridge, militarily speaking, on Sunday, Nov. 20 when police in riot gear were able to stop protesters at another bridge on 1806 about three-quarters or a mile north of the Oceti Sakowin Camp.

The bridge that night created a choke point that allowed the militarized law enforcement presence to halt the protesters forward progress with water, rubber bullets, mace, teargas and reportedly concussion grenades. Those at the front of the action became more or less trapped by the crowd behind them on the bridge, unable to retreat or move forward. It was extremely dangerous for the people on the bridge and very opportunistic for law enforcement’s purposes.

This became the most violent clash of the DAPL protest thus far, with one tribal elder suffering a heart attack and one woman from New York, 21-year-old Sophia Wilansky, having her arm nearly blown off by what witnesses say was a concussion grenade thrown directly at her.

By the end of the night, dozens were hospitalized and nearly 200 were injured. That is what a bridge can do, militarily speaking, and that is the proper term.

The owner of the pipeline, Energy Transfer Partners, has reportedly hired an organization called TigerSwan to oversee its intelligence and security operations.

TigerSwan is run by former Delta Force members and — according to an interview in Truthout with Intercept co-founder Jeremy Scahill, who has spent years investigating security contractors like TigerSwan — “has links to the now-defunct mercenary firm Blackwater.”

Blackwater is best know for its slaughter of Iraqi civilians in the infamous Nisour Square massacre in 2007.

TigerSwan contracts with the federal government for work in war zones such as Afghanistan and Iraq. And as incredible as it sounds, they are now deploying their military expertise in North Dakota to combat DAPL protesters and Native Americans making claim to their 1851 Treaty lands.

If one bridge is good, then two bridges must be better, militarily speaking. Two bridges might just be enough to hold back protesters during the impending final push to lay the pipeline under the Missouri River.

But at what cost?

For now, it appears that no one is going anywhere, at least not voluntarily.

In a letter of response to the Corps’ eviction threat, Standing Rock Sioux tribal chairman Dave Archambault released a statement saying the Standing Rock Sioux Tribe is “deeply disappointed in this decision by the United States, but our resolve to protect our water is stronger than ever… The best way to protect people during the winter, and reduce the risk of conflict between water protectors and militarized police, is to deny the easement for the Oahe [DAPL] crossing, and deny it now. We ask that everyone who can appeal to President Obama and the Army Corps of Engineers to consider the future of our people and rescind all permits, and deny the easement to cross the Missouri River just north of our Reservation and straight through our treaty lands… Although the news is saddening, it is not at all surprising given the last 500 years of the mistreatment of our people. The Standing Rock Sioux Tribe stands united with more than 300 tribal nations and the water protectors who are here peacefully protesting the Dakota Access Pipeline to bolster indigenous people’s rights. We continue to fight for these rights, which continue to be eroded. Although we have suffered much, we still have hope that the President will act on his commitment to close the chapter of broken promises to our people and especially our children.”